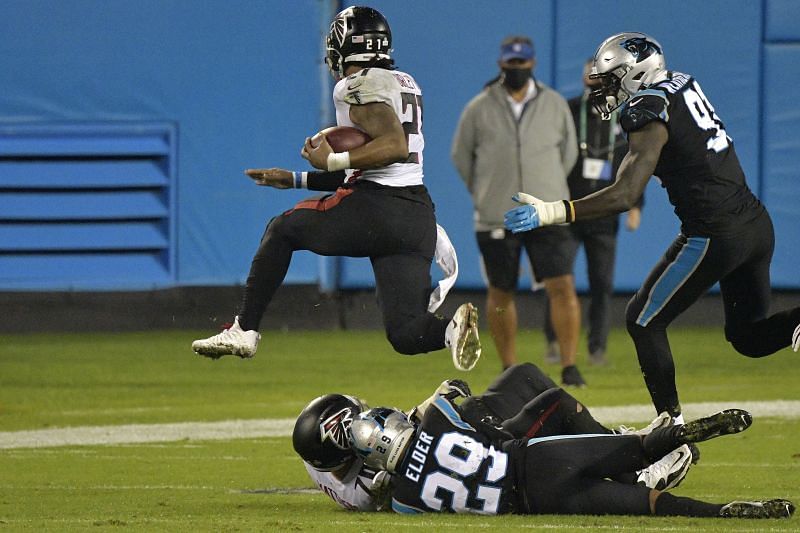 The Atlanta Falcons have become known for snatching defeat from the jaws of victory. Dating back to their infamous second-half collapse in Super Bowl LI, when they led the New England Patriots 28-3 and eventually lost 34-28, the Falcons racked up enough similarly exasperating losses to develop a reputation for blowing leads and losing creatively.

With their 25-17 win over the Carolina Panthers on Thursday night, the Falcons flipped that familiar script.

The Falcons went into the fourth quarter leading by two points. They proceeded to keep Carolina off the scoreboard in the fourth quarter and added a touchdown of their own — a 3-yard run by running back Todd Gurley II — to secure the victory and improve to 2-6 this season. The Panthers fell to 3-5 with their third straight loss.

This wasn’t the typically explosive offensive performance from Atlanta. Star receiver Julio Jones had seven catches for 137 yards, but he did not score. QB Matt Ryan threw for 281 yards, but no passing touchdowns. Brian Hill was the leading rusher with a modest 55 yards on the ground, while Gurley added 46 yards and his fourth-quarter touchdown.

The Falcons’ defense stood out here. Atlanta intercepted Carolina QB Teddy Bridgewater once and sacked him three times. They allowed the Panthers only two out of 10 third-down conversions. The Panthers only made it into the red zone once all night.

After firing head coach Dan Quinn and general manager Thomas Dimitroff midseason, the Falcons are starting over on the fly. Interim coach Raheem Morris has led the Falcons to both of their wins this season. In the offseason, the franchise will have big decisions to make regarding Morris and the head coaching situation, regarding the 35-year-old Ryan, and regarding Julio Jones. Do they want to keep this core and continue building around it, or start fresh?

It may be too late to turn this season around into a playoff berth, but momentum gained on Thursday night could lead to at least a respectable win-loss record and a solid foundation on which to rebuild.

Here are His Top 5 Songs

How much longer will Texas’ close losses haunt Tom…