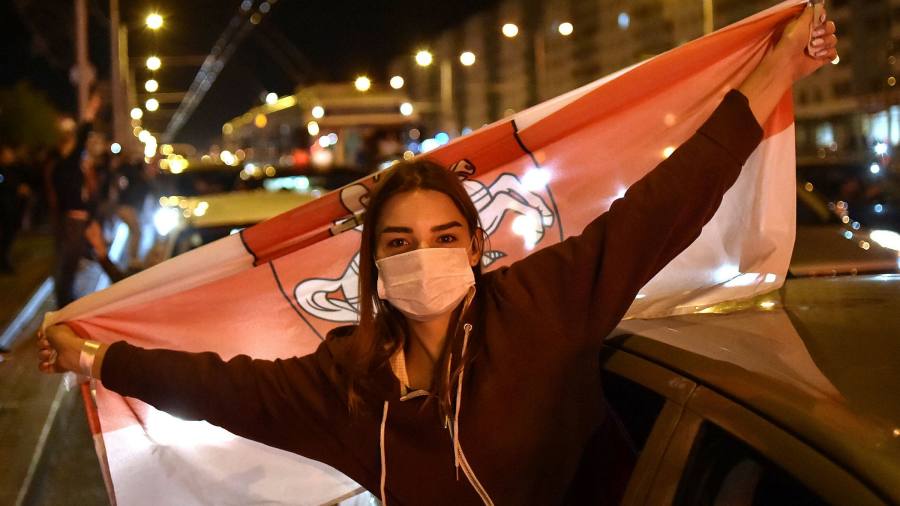 Investors in Belarus’s sovereign debt are growing jittery about the threat of international sanctions against the country in the wake of last Sunday’s disputed election.

A sell-off in Belarusian debt has accelerated in recent days as authorities continue their crackdown on protests against the contested victory for Alexander Lukashenko, which would continue the strongman president’s 26-year rule of the former Soviet state.

Dollar bonds issued by Belarus fell 2 per cent to 3 per cent in price on Thursday. A bond maturing in 2026, part of a $1.25bn sale of new debt by Minsk in late June, was trading at 93 cents on the dollar on Friday morning, having been issued at just below 99 cents.

Germany has led calls to impose EU sanctions on Minsk as the police response to initially peaceful protests has grown increasingly violent.

“The risk of sanctions is something we as bond investors have to be vigilant about,” said Sergey Dergachev, a portfolio manager at German asset manager Union Investment, who has sold some of his Belarusian bonds this week. “There’s a big question mark over how this situation will be resolved, and there’s likely to be more downside for the bonds until it is.”

Mr Dergachev said he thought sanctions that would prevent European investors participating in new debt sales by Minsk, or even trading its bonds in the secondary market, were very unlikely. However, he said EU sanctions targeting specific Belarusian officials were now his “base case”.

The sell-off follows an initially muted reaction in markets even as opposition leader Svetlana Tikhanovskaya fled the country in the wake of the poll, which saw Mr Lukashenko awarded more than 80 per cent of the vote. Bond prices slipped slightly earlier this week but remained above levels seen in the run-up to the election.

Some investors are betting that a rift with the west would drive Mr Lukashenko closer into the arms of Russia, with Moscow likely to backstop Minsk’s debt. But fund managers appear to be growing increasingly nervous about that calculation.

“It’s brave to assume that the west introduces sanctions and Lukashenko reacts by reaching out to [Russian president Vladimir] Putin who writes him a bit cheque and everything is fine,” said Timothy Ash of BlueBay Asset Management. “Sanctions on the sovereign debt would be a game-changer, and there’s no way you’re being paid enough yield for that risk.”

The yield on the recently issued 2026 bond climbed above 7.4 per cent on Friday as its price fell, having traded as low as 6.5 per cent a week ago.

Belarus’s overall debt comes to 43 per cent of gross domestic product, relatively low for a country with a single B credit rating, according to Fitch. However, more than 90 per cent of this debt is in foreign currency, leaving the government finances vulnerable to a fall in the value of the Belarusian rouble, which is down about 15 per cent this year against the US dollar.

The country has $3.6bn of dollar bonds outstanding, but larger borrowings of $8bn from Russia.

Pitcher nearly throws ball in the dirt, but umpire Lance Barrett still called it a strike