BTS V aka Kim Taehyung yet again set the internet on fire with his sultry photos. The ‘Winter Bear’ singer is an avid social media user and frequently leaves his fans intrigued with his photos. Recently, the singer shared his photofolio called ‘Veautiful Days’, which took the fans back to the British era. Now, Taehyung shared another set of photos on Instagram in which he can be seen playing hide and seek with fans.

In the photos, BTS V can be seen posing for the camera with intense expressions. It appears that Kim Taehyung is standing behind a glass that has splashes of paint. The pictures confused the fans who asked about the concept. Many fans also asked if it is a part of his upcoming photoshoot. Nonetheless, BTS ARMY admired Taehyung’s ravishing photos. A Twitter user wrote, “taehyung posting stuff from official shoots that we have zero idea about in the most microwave quality ever love him.” Another said, “Taehyung’s eyes has its own duality.”

Check out the photos and reactions here- 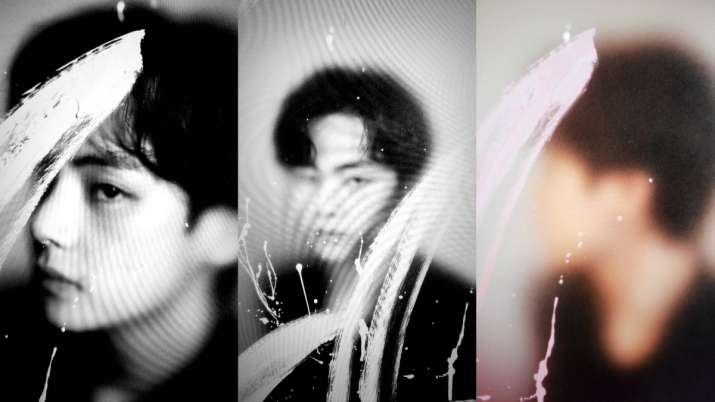 On the other hand, BTS V is all set to treat fans with another song. He will release his next song ‘Smile With You’ which will also feature his Wooga Squad member Peakboy and will release on January 25th.

Meanwhile, BTS members are gearing up to enlist for mandatory military service. The oldest member Jin aka Kim Seokjin is already serving in the military. Recently, his message for his fans, recorded before he left for the military, went viral on the internet. In the clip, he said, “I won’t be a civilian anymore by the time this is out but I’m here in front of the camera because I wanted to leave you something even if it’s just leaving a message.” He also revealed that at the time when the video was shot, he was recording the Korean variety show “Running Man”. He also said that before he leaves, he wants to record more videos of his fans.

“So I am here with the camera on today. Currently, I’m shooting for ‘Running Man’ and whenever I’m available I wish to leave these videos and records once every few months to share with you as much as possible, even if it’s just checking in briefly,” he added.

“I may not be by your side at this very moment but I’ll go looking for you soon so if you just wait a little bit. I’ll be back soon. That’s all for today. Next time, when I have the chance I’ll be back with another video. See you then!” he said.

Following BTS JIN, other members RM, SUGA, Jhope, Jimin, Kim Taehyung and Jungkook will also enlist according to their individual work commitments. The second in line, BTS Suga will be reportedly exempted from the same because of his shoulder injury. The rapper will carry out his mandatory military service as a social service agent, reported Yonhap News Agency quoting military and music industry sources.

Geyser not working? Here’s what you can try to fix it