Dead Space Remake can learn from The Callisto Protocol’s combat

Dead Space Remake, from all the trailers and gameplay footage I’ve seen so far, looks remarkably faithful to the 2008 original. Meanwhile The Callisto Protocol, once touted as the unofficial successor to Dead Space, has met a mixed reception at launch. As you can read in our Callisto Protocol review, we were on the positive side of the critical split, but did recognise concerns about its story and performance issues. Is the pretender at risk of being outshone, once we hit the Dead Space Remake release date?

Maybe not. There is one thing Callisto does better than the original Dead Space, a thing which, unfortunately, I doubt we’ll see replicated in that long-anticipated Remake. Callisto Protocol’s combat, at least in the early levels, is vastly superior to that in Dead Space – and from what we’ve seen of the Remake so far, superior to that, also.

The Ripper. The Plasma Cutter. Even the comparatively demure assault rifle. Dead Space uses shooting and killing to show off its various novelty weapons. And it’s compelling. Like the active reload feature in Gears of War, adding just one more button press or layer of functionality to each gun (do you want to fire the Plasma Cutter vertically or horizontally?) leads to more varied, more deliberate, and more spectacular combat.

There’s no such thing in Dead Space as simply pointing and shooting. Identify enemy type; select the right weapon; set weapon to the correct mode; aim at appropriate body part; and only then do you shoot. The process is more stratified, and this is its greatest strength; this is the imaginative gimmick that always elevated Dead Space above most third-person shooters. As Isaac Clarke, engineer, you’re faced with a series of screeching, flesh-hungry (bio)mechanical problems – to ‘fix’ them, you must skillfully use the right tools.

The issues with Dead Space’s combat have nothing to do with weapon designs or mechanics, or even individual instances of gunplay. In a kind of vertical slice example – Isaac Clarke versus one group of enemies – the combat in Dead Space is fantastic. The problem is with pacing.

Especially in the later levels, enemies jump out and attack you relentlessly. You might complete a large-scale combat encounter or a big set-piece, and immediately afterwards, as you’re walking the halls of the Ishimura trying to recuperate and breathe in some of the rich horror atmosphere, again, you’ll be attacked.

And then when you defeat that group of enemies, you’ll be attacked again. It becomes almost farcical, these repetitive occasions where you kill a bunch of Necromorphs, start listening to a voice note you’ve just found, only for another bunch of Necromorphs to suddenly drop in and start slicing you.

I get that the goal is to pile pressure on the player, and thereby increase the horror, and the sense of a desperate bid for survival. But it has the opposite effect. The more of something you kill, the less that each individual one feels like it has the potential to harm you. As Isaac repeatedly and successfully kills Necromorphs, sometimes by the dozen or more, he, likewise, starts to feel invulnerable. As such there is no possible threat to his survival, and so, no horror.

The Callisto Protocol does this as well. In the later levels, and especially after you’ve amassed the game’s entire weapons arsenal, Jacob Lee becomes perfectly capable of killing several Biophages at once without suffering so much as a bruise. But in its early stages, when you’ve just broken out of the prison cell, armed with only a metal pipe and the diminutive first pistol, Callisto is a masterclass in horror game combat.

Partly, it’s the dodging system. Although the inputs and mechanics of it are basic, just inviting the player to actively try to avoid an enemy’s attacks makes that enemy seem much more threatening – if you don’t pay attention, and try to just kill this thing like you’re the one with the more power, you will die. 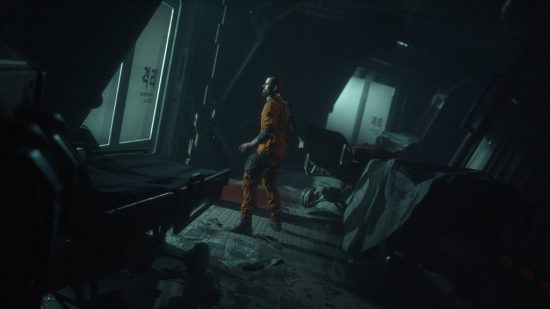 The dodging system also introduces an element of physicality and sweat. As you dodge, and launch your counterattacks, you can see and hear Jacob working hard to keep alive. Combined with the crudity of his weapons (I wish Jacob didn’t trade the metal pipe for that dumb stun rod) it makes each battle in The Callisto Protocol feel like a fierce, near-death experience.

But that’s only half of it. What’s more important is how The Callisto Protocol – again, in the early levels at least – sparingly deploys its enemies and monsters. For the first couple of hours, if you get into a fight, it’s with one, maybe two Biophages at once. Not only does this let you appreciate that kind of breathless, scrappy melee combat, it makes each individual enemy feel significant. When you’ve had to struggle, when you’ve had to think and react and really brawl just to down one monster, that monster becomes a much more affecting presence.

As a consequence, you feel more engaged in the game mechanically. There’s no idling. There’s no dully sitting there, mowing enemies down, bored with your own invulnerability. You feel like you’ve got to think and act and be careful if you’re going to survive – a much more compelling proposal.

This kind of combat, if it’s maintained throughout, can also help a game narratively. If we are meant to be Jacob, or at least deeply sympathise with Jacob, and Jacob is meant to be scared, that emotional compact becomes much stronger if we feel scared, also. Jacob panicking because he’s trapped in a room with a Biophage has no dramatic impact if we, playing as him, feel no threat from that Biophage. On the contrary, if each individual one has hurt us, beat us, and really made us earn a victory, Jacob’s apprehension becomes our own.

And speaking again of Jacob, compared to Isaac in the original Dead Space, he’s a character who displays fear, ardour, and stress much more visibly – who more effectively ‘sells’ how we’re meant to feel. With the original Isaac, for the most part, all we have to go on in terms of his reactions or emotions is the green-yellow-red health bar on the back of his rig. It’s a neat UI gimmick, but even the occasional moments where Isaac winces, flees, or shows some visible kind of panic, do little to communicate what he’s internally going through. 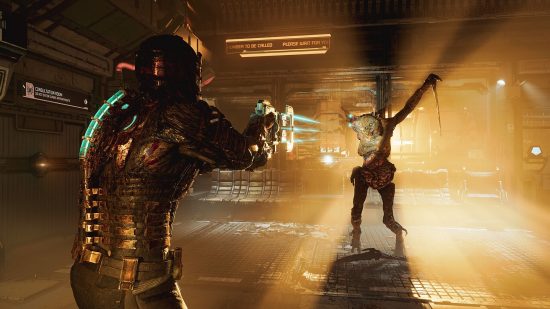 Isaac Clarke in the original Dead Space is a hunk of walking metal with a gun. Jacob Lee on the other hand squirms, sweats, and swears. They’re minor details, but Jacob’s whisper of “oh f***” when he sees a security robot, or the way he shuts his eyes in a kind of silent prayer when he first encounters the blind, stalker enemy, give him a traceable – but contained and not over-emphasised – humanity. And when a character has some detectable humanity, we instinctively cannot help it: we feel more connected and attuned to them. And this, in turn, adds to the immediacy of the combat, the interplay between what our character is doing and how we imagine it feels.

Jacob – stressed, scared, sweaty – is identifiably a person. I, also, am a person. So when he’s slashed and bitten, and hauling that great metal pole over his shoulder to try and save his own life, I feel it more keenly. The Dead Space Remake, which gives a voice, a new face, and ostensibly “more agency” to Isaac Clarke, seems to appreciate this, too. But it all works much better when combat encounters are rare and the body count is lowered.

If Dead Space Remake has as much shooting and death as the original, Isaac’s added humanity won’t be as affecting – a character can swear, shout, and emote, but if in gameplay they’re an unstoppable death machine, we won’t feel their vulnerability. The Callisto Protocol, at its best, mixes a perceptibly human character with what feels in gameplay terms like struggle and fallibility. I would love to see this in the Dead Space Remake. In fact, I would love to see it in more games generally. 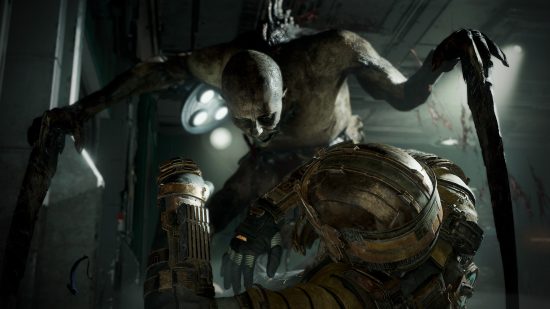 As it progresses, however, The Callisto Protocol gradually abandons this dynamic, giving you more guns to fight more enemies across more regular encounters. Like Dead Space, when it comes to horror – or even a basic sense of duress – Callisto’s developers seem to believe, quite simply, that more is more and less is less. It saddens me that games think so little of us, that we need a constant administration of blood, death, and killing or else we’ll lose interest.

It’s accepted in horror films – and in pure horror games like Alien Isolation or Amnesia – that the less you see of something, the more frightening it becomes. Like walking around in the dark, it’s scary because you can’t see or comprehend or truly know it. The same must be true for horror games with more combat. The less you fight something, and the less simple it is to win that fight, the more it feels dubious, uncertain, and filled with coiled, dangerous potential, whereas the more you fight it and kill it, the less it affects you. That’s what The Callisto Protocol, at least initially, seems to understand. That’s what I hope the Dead Space Remake has learned.

If you’re getting your Plasma Cutter fired up ready for Dead Space, make sure you have the full Dead Space system requirements, to prevent any Ishimura-style malfunctions. You might also want to check out some of the other best horror games, or maybe the best upcoming games for 2023.

Kareena Kapoor gets ready for The Crew with an intense workout session at home. Watch: