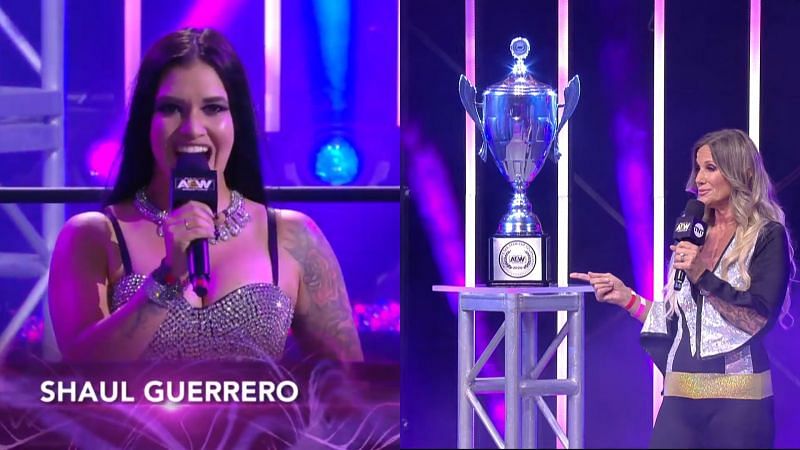 AEW’s Women’s Tag Team Cup Tournament, titled ‘The Deadly Draw’, officially got underway and the first night of the tourney was streamed on AEW’s YouTube channel.

AEW aired two quarter-final matches of the tournament. The episode wasn’t short on big moments either as it marked the AEW debuts of former WWE Superstars Ariane Andrew FKA Cameron, and Taynara Conti.

Eddie Guerrero’s daughter Shaul Guerrero appeared as the special ring announcer, and she kicked off the show by introducing 3-time WWE Women’s Champion Madusa. The WWE Hall of Famer came out and cut a promo, in which she hyped up the AEW Women’s Tag Team Cup Tournament and its importance.

We then cut to the first match of the AEW Women’s Tag Team Cup Tournament.

#1. The Nightmare Sisters vs. Penelope Ford and Mel

Ford and Allie began the in-ring proceedings of the tournament as they jockeyed for position. Allie got the early advantage with a knee strike followed by a pinfall attempt. She tagged in Brandi Rhodes, and they worked in tandem to execute a double elbow drop.

Mel got into the action and pummelled Brandi.

Rhodes tipped the scales in her team’s favour and they surprisingly isolated Mel for some time until Penelope Ford got back in. The action shifted to the outside. Kip Sabian and QT Marshall had a verbal altercation. Mel took advantage of the chaos and kicked Allie right in the face.

Penelope Ford continued to punish Allie in the ring as Brandi eagerly waited for the hot tag. Allie tried to gain some momentum with a few quick roll-ups, but Ford shut her down with a big clothesline. Allie created some separation with a jawbreaker.

She went for the clothesline, but Ford got out of the way before seamlessly transitioning into the cutter. Mel came in and went for a massive move from the top. She crashed to the mat for all her troubles, and Allie finally made the hot tag to Brandi.

Mel hit Brandi with a massive Choke bomb, but a distracted referee couldn’t complete the three-count. An irate Kip Sabian got up to the ring apron to argue with the referee. QT Marshall intervened and got decked by Sabian.

Back in the ring, Brandi hit Mel with a spear and picked up the win for her team and advance to the semi-finals of the AEW Women’s Tag Team Cup Tournament.

Ariane Andrew and Anna Jay went back and forth to begin the match before the former WWE star got the first pin attempt.

Andrew went to her corner for the pin. Nyla Rose, however, wasn’t ready to get involved. Conti got tagged in, and they both assaulted Andrew. Rose finally stepped into the ring, and double choke slammed Conti and Jay.

Andrew officially tagged Rose in as Conti stood in the opposite corner. The Brazilian Superstar went on to unleash a series of stiff kicks which took Rose down. Anna Jay then got tagged into the match.

Jay and Conti, though, managed to floor Nyla Rose and they targetted Nyla’s left leg with varied attacks. They made frequent tags and worked on Nyla Rose’s injured left leg.

The finishing sequence of the match saw Ariane Andrew flatten Conti with a snap suplex followed by a split pinfall. However, Anna Jay was the legal woman, and she caught Ariane with a rolling neck breaker for the three-count.

Brandi Rhodes and Allie were interviewed by Alex Marvez backstage, and Rhodes showed off an egotistic, self-centred and hellish side of her character. A full-fledged Brandi Rhodes heel turn and a babyface run for Allie are undoubtedly coming soon.

Here’s how the bracket of the AEW Women’s Tag Team Cup Tournament looks night one.

What were your thoughts about the first episode of AEW’s Deadly Draw? Let us know your thoughts in the comments section and in case you haven’t watched it yet; we’ve embedded the full video above for your convenience.