How Companies Are Getting Fast Coronavirus Tests for Employees 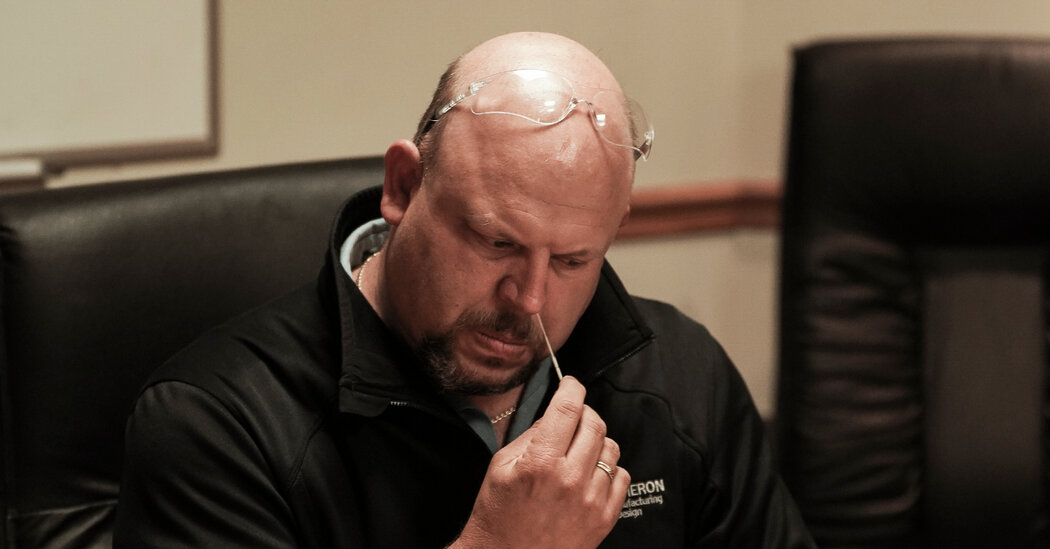 As businesses try to recover from the pandemic’s economic blow while ensuring the safety of workers and customers, many have complained of two obstacles: access to coronavirus testing for their employees and long delays in receiving results.

But some have found a reliable workaround. Through a growing number of intermediaries, they can generally obtain test results in one to three days, often by circumventing large national labs like Quest and LabCorp that have experienced backlogs and relying on unused capacity at smaller labs instead.

The intermediaries occupied various corners of the health care galaxy before the pandemic, like offering treatment on behalf of insurance companies or providing employee access to human resources data. Now they are addressing what Rajaie Batniji, an executive at one of the companies, calls “a supply-chain optimization failure.”

“The bottleneck in the crudest terms is: Are you routing tests to processing labs that can process it immediately?” said Dr. Batniji, a physician and co-founder of Collective Health, which administers health plans for employers and created a separate testing and screening product during the pandemic. “That ends up being what slows us down.”

Daniel Castillo, the chief medical officer of Matrix Medical Network, which is among the companies connecting businesses with laboratories, said the solution often meant turning to labs located where the spread of the virus was relatively contained.

“In some places there are spikes and perhaps testing issues; in other parts of the country there are not,” said Dr. Castillo, whose company works with health insurers to treat chronic conditions like diabetes and hypertension. “We might send a test across the country — fly it to Maryland from Arizona.”

While there is not limitless capacity for employers to test workers, Dr. Batniji, Dr. Castillo and others in the industry said significantly more could do so. Even Quest and LabCorp have said their average turnaround times have dropped significantly in recent weeks.

A program intended to catch infections before they result in outbreaks typically requires testing a substantial portion of people in a shared space once a week, if not more frequently, whether or not they have symptoms. Mike Boots, an epidemiologist at the University of California, Berkeley, said that such testing could be enormously beneficial, but that it must be combined with other measures, like distancing and contact tracing, to be effective.

For PCR tests — which detect the virus’s genetic material and are the gold standard of accuracy — the process typically costs around $100 per test per person. Even less sensitive tests, which experts increasingly recommend as a screening tool, can add up, and most currently require special equipment and a health professional to administer them.

As a result, decisions about testing often reveal less about availability than about the economics of a business and the value it places on driving down workplace transmission.

Businesses for which an outbreak among employees would be extremely costly — possibly curtailing or halting operations — are generally the most likely to seek out tests.

“If there is a significant probability of a shutdown, it’s a no-brainer — you’re going to do everything you can privately to stop it,” said Jonathan Kolstad, an economist at Berkeley who has written about efficient means of mass testing and has set up a company to help promote it. “But in some cases, you don’t get a shutdown.”

In those cases, Mr. Kolstad and other economists said, employers are unlikely to carry out testing until it is cheaper and faster.

Cameron Manufacturing in upstate New York is putting a premium on employee testing. The company, which makes conveyor belts and other equipment for food and dairy processors, only briefly shut down because of the pandemic, but many customers delayed sales visits and installation work, wary of admitting outsiders.

“It’s affecting us revenue-wise,” Matthew Sharpe, the company’s chief executive, said in an interview in August. “We haven’t had major contracts canceled, but they’ve been pushed out into next year.”

So that month, Mr. Sharpe began regular PCR testing for members of his sales and engineering teams, who typically travel to customers’ work sites. Workers are also tested before and after they travel to a “hot” state for work, which could otherwise require isolating themselves for several days upon returning. Mr. Sharpe said Cameron employees received test results through a website within 36 hours and could use the information to establish their health status to customers.

The company that built the site, Atlas ID, connected Cameron with a lab in Washington State that analyzed its tests. Atlas was founded in 2018 to give workers secure access to employment and income verification data, so they could share it easily with lenders and property managers. When the pandemic hit, it shifted its focus to employers in need of testing while building a network of labs to serve them.

Chip Luman, a co-founder of Atlas ID and its chief operating officer, said those relationships benefited smaller labs by offering steadier demand. “If I’m bringing in this partner that can guarantee me 100 tests every Monday from this employer, 500 from that one, they can look at capacity and plan business around that,” Mr. Luman said.

US BioTek, the lab near Seattle that handles Cameron’s tests, previously focused on allergy testing, among other services, but invested in new testing equipment during the pandemic.

Jack Frausing, US BioTek’s chief executive, said in an email that he had contacted Atlas on LinkedIn after reading about the company in the press. Mr. Frausing said US BioTek was able to provide results for over 95 percent of the samples it received within 24 hours and had the capacity to more than triple its test processing.

Other employers have begun regular testing of asymptomatic workers for similar reasons.

Some, like the meat processors Tyson Foods and JBS, have done so after outbreaks forced them to shut down facilities temporarily, and in the face of pressure from the United Food and Commercial Workers union. Representatives of both companies said they had begun testing to help protect workers.

Kate Maguire, the artistic director and chief executive of the Berkshire Theater Group, which went ahead with a production of “Godspell” this summer after two months of discussions with an actors’ union about safety protocols, said frequent testing of all the actors was indispensable.

“I didn’t know otherwise how to feel secure,” Ms. Maguire said. “If we had an outbreak, that would have been the end of us for a long time.”

But the flip side of this calculus, some economists said, is that employers who believe they can continue to operate even if a number of workers become infected will often forgo the expense of testing.

Zack Cooper, an economist at Yale’s School of Public Health, who contributed to a recent Rockefeller Foundation report on a national testing plan, said many businesses faced a key consideration: “If an employee gets sick, will they be able to bring someone else in to do their job?”

Some automakers, for example, have relied on an increase in temporary workers to deal with absences related to Covid-19, though they assert that the practice is unrelated to their decision to forgo wide-scale testing.

While the United Automobile Workers union has demanded such testing for months, several automakers have said it is not yet practical.

James R. Cain, a General Motors spokesman, said by email that until there was an accurate test that could deliver results very quickly, without the need for a lab, “mass testing will have limited if any value in helping G.M. prevent disease from getting into the workplace.” Mr. Cain added that the company was continuing to explore testing strategies but that its safety protocols, which include protective equipment and distancing, had been effective so far.

Mr. Kolstad of Berkeley and other economists say genuine uncertainty about the value of testing workers without symptoms — including about how often testing must occur and how quickly the results must be obtained to be useful — may lead employers to forgo testing.

The federal government has largely avoided providing employers with guidance on asymptomatic testing — the Centers for Disease Control and Prevention says such testing of workers “may be useful to detect Covid-19 early and stop transmission quickly” — which has created additional reluctance. The agency recently stopped recommending testing for people without symptoms in its guidelines for the general public, drawing criticism from experts.

Some employers may also worry that knowledge of infections they discover through testing could expose them to lawsuits from workers or customers if they continue operating.

Many experts argue that more widespread testing by employers will ultimately hinge less on capacity than on cost. They recommend greater use of tests that are less sensitive but faster and cheaper than PCR tests, but those tests have experienced regulatory hurdles and other bottlenecks.

“If it was easy as taking a temperature,” said Lawrence Katz, a labor economist at Harvard, “then no doubt every employer and every office you went into would be testing people all the time.”