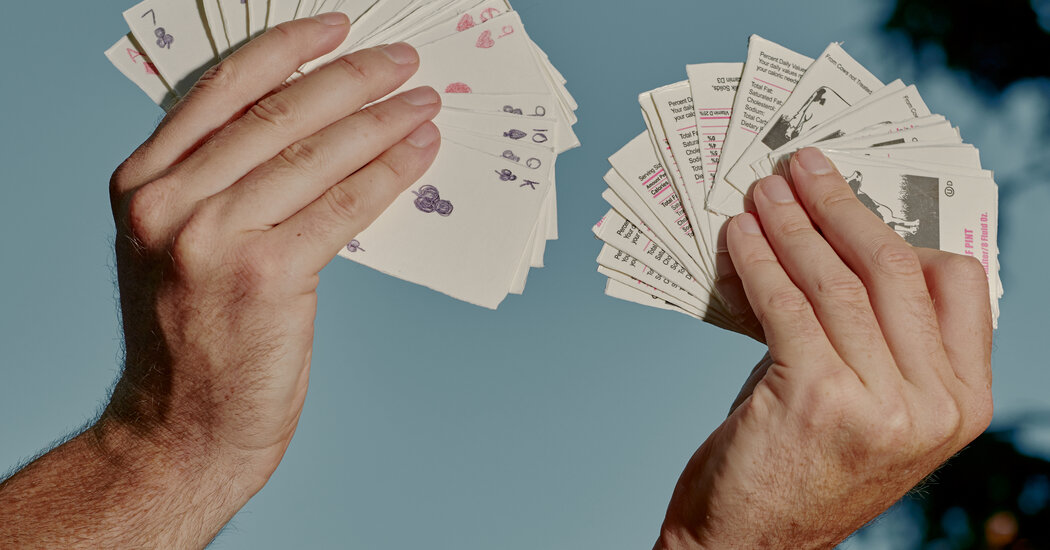 A deck of cards cut from milk cartons. A wand made with medical tape. How a group of inmates learned “the magic of magic.”

Photographs and Video by Vincent Tullo

When the magician Kris Nevling was released from prison two years ago, he had been incarcerated for most of his life.

What kept him sane, he said, was practicing magic, mostly card tricks. He was physically small and struggled with addiction, but magic made him feel valued and powerful. “In prison everyone has a nickname,” he said. “And mine was always Magic.”

Nevling, 43, ultimately served 23 years in Pennsylvania on charges including drug possession and theft.

He started learning magic at 16. On a weekly trip from the juvenile detention center to the library, he found magic books and started writing letters to every magician he could find listed in the Yellow Pages, asking for tips.

One of the magicians Nevling contacted was Joshua Jay. He wasn’t alone.

When Jay began writing a column for the now-defunct Magic magazine in 2001, he did not expect his tricks to end up in the hands of prison inmates around the world. Then the letters started to arrive. There was a man serving life without parole for murder in California. An inmate in Georgia, another in Australia. Their crimes varied. He wrote back to them all.

It made sense, Jay came to realize, that people would turn to magic in moments of despair and isolation: “If there is anything missing from a maximum-security prison, it’s wonder.”

Over time, some of the inmates formed a community, exchanging letters with step-by-step diagrams of sleight-of-hand tricks or tips for making props with limited materials.

One of them is David Garza, who found Jay’s monthly magazine column in 2008. Write in with questions, it said at the bottom, so Garza did.

At the time Garza, 52, was in an Ohio state prison, serving part of what would ultimately be a 14-year sentence on charges including criminal sexual conduct.

“I put myself in the situation by my choices, and it’s the consequences,” he said in a telephone interview. “Something needed to change, because I couldn’t believe I got to the point where I was actually so selfish, that I didn’t care about how I impacted someone else’s life.”

Many of a magician’s most basic tools — ribbons, knives, coins — are not available in prison. So Garza sent Jay a list of permitted items, including toothbrushes, cigarettes, pencils, playing cards and plastic bottles. Jay designed tricks that used these limited materials, and Garza began making his own props, like balls and poker chips, from glue and toilet paper.

He would dip toilet paper in water, shape it and let it dry completely — this took about a week — before coating it in layers of glue, each of which also had to dry before the next layer could be applied. He said the props were often confiscated or destroyed by guards during routine searches, and he would have to start again.

To Garza, magic was a way of ordering time. After the first week in prison, he said, a question presents itself: “What do you do? And you look at it like, ‘I’ve got two years, I’ve got 10 years, I’ve got the rest of my life in this place. What am I going to do with my time?’” Some people pursue a G.E.D. He got into magic.

Before his 2012 arrest, Robert J. Williams, 30, was best known for eating a light bulb in under 34 seconds. If magic tricks rely on making the impossible look real, his stunts involved doing real things that look impossible. Williams has eaten a watch (“it’s time consuming,” he joked), swallowed swords, breathed fire and pierced parts of his body (jaw, hand or bicep) with long spokes.

The day after his 22nd birthday, Williams said he was arrested after his 11th attempted bank robbery. He was incarcerated, first at Rikers Island and then the Moriah Shock Incarceration Correctional Facility, a minimum-security prison in upstate New York, before being released in 2014.

Without access to props, Williams’s magic became more psychological, he said, and more creative: He started focusing on acts like mind-reading and hypnosis. Sometimes he put on an hourlong show with a single prop, like a pencil: “A pencil can stab something, a pencil can write, a pencil can vanish,” he said in a telephone interview.

Since at least World War I, hospitals have used magic for its documented therapeutic effects. Programs within the criminal justice system are rarer: Starting in 2007, the Hocus Pocus Project sent magicians into juvenile detention centers and hospitals in New York before running out of funds 10 years later.

It was organized by the Conjuring Arts Research Center, whose director, William Kalush, said the program faced skepticism. He said people would ask, “What do you teach them, how to escape from handcuffs?” But he added, “anybody who’s done anything creatively understands the joy of having something that you’ve invented for yourself.”

Rafiel Torre, 55, said that in 2003, he was convicted of murder and sentenced to life in prison without the possibility of parole, and he now has exhausted his appeals. With no access to the internet, he has gleaned most of his magic knowledge from books, letters from Jay and other magicians, and whatever magic he could catch on TV.

Torre said he sculpts his own props out of sponges. For string, he pulls thread out of his underwear. During stretches in solitary confinement, where playing cards are forbidden, he found that he could fashion four makeshift cards from his daily milk carton.

“Everybody wants to feel like they matter. And in prison, most of us don’t,” said Torre, now incarcerated at the Substance Abuse Treatment Facility and State Prison in Corcoran, Calif. With magic, he said, “I can practice, and make my mind go someplace else. I get taken away for a minute.”

Magicians sometimes talk about the moment right after they pull off a trick, before the rational mind sets in, and the viewer is transported, briefly, out of reality. “You make them for a few seconds believe you’re doing the impossible. And for me, for a magician, you see that look on their face — ” Torre paused. “I can’t equate it to anything else.”

After Garza was released from prison, he was astounded by how much easier it was to get audiences to feel that sense of awe. He didn’t have to overcome the prison’s atmosphere of fear, powerlessness, and suspicion. “They were already open to it. And that blew my mind,” he said.

Garza now works as a professional magician in Cleveland, though his normal gigs in bars and restaurants have evaporated because of Covid-19.

In some ways, Garza said, his work on the outside feels less urgent than his performances in prison. “We’re deemed a population of people that are so terrible, so low-worth that we are not allowed to be out in the world.”

But being able to overcome that feeling even for a moment, he said, “That’s the magic of magic.”

Surfacing is a biweekly column that explores the intersection of art and life, produced by Alicia DeSantis, Jolie Ruben and Josephine Sedgwick.