IPL 2020: Rajasthan Royals gearing up for latest edition after an eventful and busy off-season

It will soon be Indian Premier League (IPL) time once again as the annual six-week long cricketing extravaganza gets ready to return for the 2020 edition.

A part of the annual cricket calendar since 2008, the IPL is unlike no other T20 franchise league with its array of international superstars and the best of India’s domestic talents coming together to concoct a vibrant and entertaining mix of cricketing action.

The IPL is sport and entertainment in equal measure and India’s undying love for anything cricket has seen the tournament evolve into a beast over the course of 12 completed editions. With each franchise developing a passionate and loyal fan base, packed stadiums and massive crowds for even training sessions are a common sight when the IPL is under way in all its glory.

For nearly six weeks every year, the IPL dominates India’s landscape like no other. The faces of local and overseas stars are plastered across every billboard in town while IPL talk is all you see or hear over various mediums such as televisions, radio and social media. Nearly every discussion in Indian households, workplaces and public spaces revolve around the IPL when the show is on.

Meanwhile, the cricketing action on the field is chockablock as players, coaches and billionaire team owners jet around the venues across India.

Some call it a cricketing spectacle while others call it a never-ending party. A few might even call it a circus with the glaring glitz, the theatrical ‘auction’ of the players and constant drama.  However, for fans and neutrals alike, there is no denying that the IPL is one of the greatest shows involving the historic sport. But while the tournament nearly brings India to a standstill for about two months every year, what do the franchises do in the lengthy off-season?

Apparently, they do quite a lot in the remaining 10 months as well. At least, according to Rajasthan Royals chief operating office Jake Lush McCrum.

“We are very active throughout the year. Our big aim is to create a franchise which has a 365-day engagement with the fans,” he told Sport360 in an exclusive chat.

“Our marketing and digital side is continuously working and that is an area we have invested heavily in the last year. We have a big internal digital team and an in-house video team who travel around creating content from our players. So that side is continuously active.

“On the cricket side, we are actively reviewing player performances around the world, trials throughout the period along with multiple strategy and review sessions.

“If you compare our management team compared to other franchises in the IPL, most franchises have a team of around five people who work all year round, whereas we have a team of 25-30 people doing that. We look at new players coming into the market who might be worth pursuing in the next auction.”

Champions of the inaugural IPL edition in 2008, the Royals have failed to reach the final of the competition ever since. Their successful campaign was almost fairytale like, with a then 37-year-old Shane Warne leading an unfancied team bereft of major stars all the way to the title.

In fact, the Royals have never been one of the more extravagant spenders in the IPL and had largely taken a conservative approach in most auctions. It is a team which has shot the likes Ravindra Jadeja, Yusuf Pathan and Sanju Samson into stardom over the years. However, there has been a noticeable shift in their recruitment strategy in recent editions, with the franchise splashing the cash in the auctions. Their US$1.96 million (Dh7.19m) purchase of star England all-rounder Ben Stokes in 2018 was the most expensive in history while they have also spent big bucks over the likes of Jofra Archer, Jaydev Unadkat and England stalwart Jos Buttler in the last two editions.

McCrum attributes this loosening of the purse strings by Rajasthan to the US$ 2.55 billion media rights deal signed by the IPL in 2018. He also maintains that the Royals remain committed towards unearthing unknown gems.

“I wouldn’t say that our strategy has changed in the sense that we are always trying to find the undervalued talent,” he said.

“That has continued over the last two years as well with the likes of Shreyas Gopal who was bought for only 20 lakh INR (Dh10, 000) and then Riyan Parag who was bought for the same price. So that strategy of developing young talent is still there.

“Even now, we have our pre-IPL camp going on in Nagpur and we have all our Indian players here. In a way, it is also a chance for us to trial players for the next season. We have a lot of fast bowlers and spinners here and we are always keeping an eye out for young undervalued talent.

“We are continuously searching for new players all year round. We have loads of video analysis coming in and a lot of data to help us find these undervalued players. What has changed is the new IPL media rights deal which came into force in 2018. That has helped us become profitable as a business, as have all other franchises. As a result, we are able to spend our full purse amount in the IPL auction and still remain profitable. 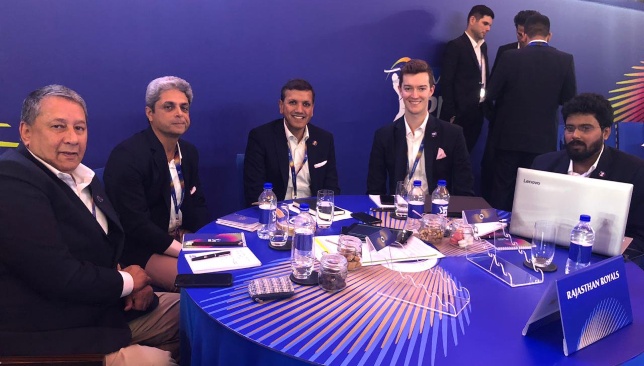 McCrum (second from right) and the Royals contingent at the IPL auction.

“This means we can buy players like Ben Stokes, Jofra Archer and Steve Smith which will hopefully lead us to winning trophies and continuously compete for the title. It is not like we have changed our strategy, it is just that the profitability allows us to spend a bit more on the star players.”

The recruitment of players, according a McCrum, is a year-round process for the Royals.

“Our process is continuous. During the IPL we are tracking players, as well as after it. As we get closer to the auction, our analytical team in Chennai will be sending through videos daily to our head of cricket (Zubin Bharucha) and Andrew McDonald (head coach) about players who have performed well in the league as well as those that are interesting,” McCrum explained.

“Andrew then reviews these players with more updated information and they are then moved into a priority list if they are of interest. As we then get even closer to the auction, we run multiple trials.

“We will run a couple of trial sessions just before retention and then some trial sessions before the auction. This helps us see players on the ground by putting them in match scenarios and situations and see how they deal with the pressure.

“Someone might have only 12 deliveries to make an impact in a match but it tells us a lot about them. This is how we got interested in Aniruddha Joshi who we signed in the latest auction. He came to our trial and performed exceptionally well. That gave us the confidence to buy him in the auction.”

The IPL auction, meanwhile, is a grandstand affair and can be called a spectacle in its own right. It can turn players into millionaires overnight as their names go under the hammer, although not everyone gets to be lucky. Given the immense competition for spots, many players go unsold and find no takers among the eight franchises. On the franchises part, it requires a lot of strategising to acquire their desired targets and Royals leave no stone unturned to prepare for the auction.

“After the player trials, we then compile a big shortlist of players to review as we build up to the auction,” he said.

“We then run some auction stimulations with our analysts in Chennai where all of us are in a room. Each of us takes a team and each of has researched the multiple requirements of that particular team. We run multiple stimulations with a rough value of the players. This helps us build our decision tree which we follow in the real auction. 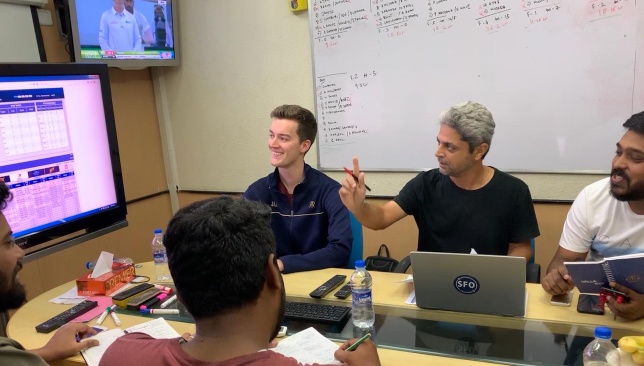 McCrum and Zubin Bharucha participate in the auction stimulations.

“It obviously has a lot of variables and we build our squad off that. We have a priority list of players and then we have the flexible options depending on how the rest of the auction pans out. This helps us in attaining around 95 per cent of the players we want and we even save a couple of million dollars.”

With aspirations of increasing their fan base, the Royals will be playing two of their home matches in the upcoming season in the Assamese city of Guwahati. With Guwahati being the hometown of Assam prodigy Riyan Parag, the Royals are bound to draw huge crowds in those two clashes.

While the move is welcome one for cricket fans in the North East region of India, there are always questions over whether it might dilute the identity of a team which carries Rajasthan in its time. McCrum, however, disagrees.

“We have played in 15 different cities throughout the IPL, we have played in multiple countries. What we have built is a global fan base and across India that continues to be passionate. This fan base supports us no matter what players we have.

There are teams where if one player leaves, they would lose half of their fan base. Through all these years, we have built a loyal fan base who support us continuously. We are still playing five matches in Jaipur which is our fortress and we are excited about winning matches in front of our loyal fans in Rajasthan. But we also want to grow the reach of IPL in India and the North East is the next region.

“They have millions of cricket fans and a really strong up-and-coming cricket community and structure. I think the ACA (Assam Cricket Association) have done a lot of great work at grassroots level and we want to support that. We think it’s a great opportunity to engage with millions of fans and give them the opportunity to enjoy the best sporting entertainment event in the world.”

One venue where the Royals could play in the future is Ahmedabad which has recently become home to the largest capacity cricket stadium in the world. With the newly built Motera Stadium boasting a capacity of 110, 000 spectators, the Gujarat capital city will definitely be a lucrative option for several franchises going forward.

“Ahmedabad is an amazing stadium. I haven’t been there since it was renovated but the pictures are astonishing,” said McCrum.

“Every year we review all stadiums that are in India so I am sure we will look at Ahmedabad too next season. This year we looked at Jodhpur but the stadium wouldn’t have been ready in time for the IPL. We also looked at Lucknow.”

In keeping with Royals’ aspirations to become a global brand, the franchise has signed a deal with Dubai Expo 2020 to be lead sponsors for the upcoming season.

“A defining feature of Rajasthan Royals, and indeed the IPL, is diversity and the ability to unite the greatest athletes from around the world.

“In a similar way, Expo 2020 Dubai will unite 192 counties with incredible displays of innovation and creativity. We could not be more excited to bring the sponsorship to life for our fans.”

Whether the Royals can end their decade long title drought in the upcoming IPL edition remains to be seen, but they are definitely managing to make all the right noises off the pitch.

Serie A is back: Ronaldo’s goals, Lazio’s…

Global stocks drop with Trump expected to hit back at China