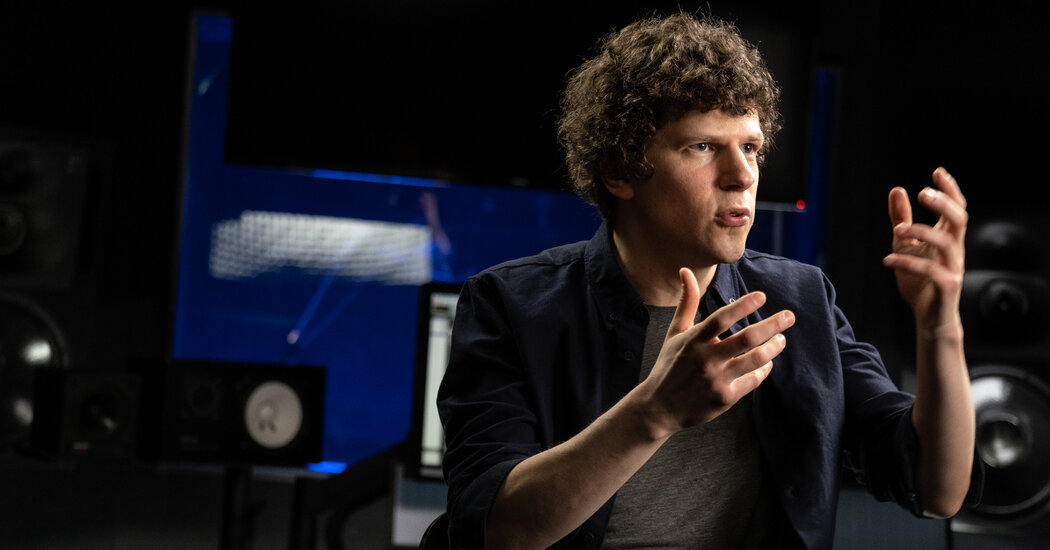 If you’re missing the chilly joy of ducking into a movie theater on a sweltering day, welcome to the club.

Ditto for attending concerts, plays, sporting events and awkward variety shows on the last day of summer camp. Our usual forms of entertainment are scarce right now, but here’s a fresh alternative: Jesse Eisenberg’s Audible Original, “When You Finish Saving the World.”

The idea for the five-hour, 17-minute audio drama, available on Tuesday, grew out of a conversation between Eisenberg — the star of movies such as “The Social Network” as well as an author and playwright — and a friend who confessed that he had no emotional connection to his newborn daughter.

“He was mortified and felt terribly guilty. I thought this was an interesting dynamic to explore,” Eisenberg said in a phone interview. “Then I met these great producers who told me about a new format which is fiction created exclusively for audio. The internal struggle of a character who is emotionally a bit stifled seemed perfect for that medium.”

“When You Finish Saving the World” tells the story of the Katz family over 30 years. First, we hear from Nathan (voiced by Eisenberg), a young father struggling to connect with his newborn son; then Ziggy (Finn Wolfhard), that same baby, now grown into a 15-year-old blundering through adolescent angst in 2032, which makes the present look downright blissful; and, finally, Rachel (Kaitlyn Dever), a wide-eyed, well-intentioned student trying to get her bearings at Indiana University in 2002. Her path is about to make a zigzag that will lead her to become Nathan’s wife and Ziggy’s mother.

Each character takes shape through his or her own series of audio files. Nathan’s are intended for a couples’ therapist and Ziggy’s for a futuristic bot therapist he has been “sentenced” to see. Rachel’s cassette tapes are intended for her high school boyfriend, who is awaiting deployment to Afghanistan.

These dispatches are whispered and wept from a variety of locations, including a guest room, a bathroom and a Subway sandwich shop. They give you the forbidden thrill of reading someone else’s mail, with the added bonus of being able to hear the sender’s voice. The experience is reminiscent of watching a play — the intimacy and urgency of “Dear Evan Hansen” come to mind — to the extent that brief pauses between sections are as jarring as the house lights coming up in a hushed theater.

Rachel Ghiazza, the head of U.S. content at Audible, said Eisenberg’s approach is “genre-bending” and “pushes the boundaries of what audio storytelling can do.” This podcast-weary walker would have to agree.

One might wonder about the logistics of producing anything during a pandemic, let alone a three-part drama with music and sound effects such as a baby crying, a party raging, a button clicking on an old-fashioned tape recorder. (Keen-eared Subway enthusiasts may question the crinkly noise of a sandwich being unwrapped — it sounds like it may be the wrong paper.)

Here’s how it all came together. Eisenberg spent several months writing the script, even meeting with veterans to find the right military base for Rachel’s story. “When a friend who was stationed in Karshi-Khanabad in Uzbekistan told me about his experiences, I knew I had the right location,” Eisenberg said. “All of the military stories are based on friends’ experiences, and I lined them up on the same timeline as U.S. politics in 2002, so Rachel would have to struggle to navigate two opposing worlds: a boyfriend stationed overseas and an antiwar, liberal college campus.”

In the early weeks of 2020, Eisenberg recorded his part in a Jersey City studio, then traveled to Vancouver’s Gastown neighborhood to record with Wolfhard in a studio owned by the singer-songwriter Bryan Adams. Wolfhard’s section happens to include singing and a slew of made-up slang delivered with a fluency only an actual teenager could muster.

Wolfhard, 17 and best known as Mike Wheeler on the Netflix series “Stranger Things,” said: “It was therapeutic. I got to be kind of a brat for a change. Hopefully I’m not as much of one in real life.”

Of his invention of the hipster lexicon of the future, Eisenberg said, “Ziggy is one of these pretentious kids who adopts something before general society agrees that it’s palatable. My only inconvenience was, anytime I came up with a new word, I would immediately search in Urban Dictionary and discover that it meant something that was horribly sexually perverse.”

Wolfhard put Eisenberg in touch with Dever (a Golden Globe nominee for “Unbelievable”) and, in March, she and Eisenberg met up at a Los Angeles coffee shop, Joan’s on Third, to discuss the project. “Jesse was the last person I shared a cookie with in the real world,” Dever said.

“It was classic chocolate chip,” Eisenberg recalled. “Had I known the world was about to change, I would have gotten something else.”

With California on lockdown, logistics presented a challenge. “Where the suspense came in was figuring out how to record Kaitlyn’s part of the story,” Ghiazza said. The team at Audible put together a kit containing “everything she needed to turn her home into a professional recording studio” — including a microphone, audio interface, monitor, Bluetooth mouse, pop filter, microphone stand, headphones and cabling.

Dever said she could hear Eisenberg in her headphones, but otherwise she was on her own in a bedroom closet. “There was something about being in the comfort of my own home that made everything more relaxed and casual. It took the pressure off,” she said.

“When You Finish Saving the World” is also being made into a movie, with some adjustments — like taking place in the present day. Other details will remain the same: Julianne Moore, who plays Ziggy’s mother, runs a shelter for victims of domestic violence in the film, just as Rachel does in the audio version.

“She’s a mother who is a hero to thousands of people but feels less comfortable as a mother to one,” Eisenberg said.

As for what listeners take away from “When You Finish Saving the World,” Eisenberg hopes it is empathy. “In stories that take place from multiple characters’ perspectives, where you see the same world through different eyes, I think there’s a macro message that the world is full of complicated people, not heroes and villains,” he said. “Everybody’s trying their best. If you try to understand their intentions, you might understand their behavior better.”

Will official data show that the US recovery has stalled?