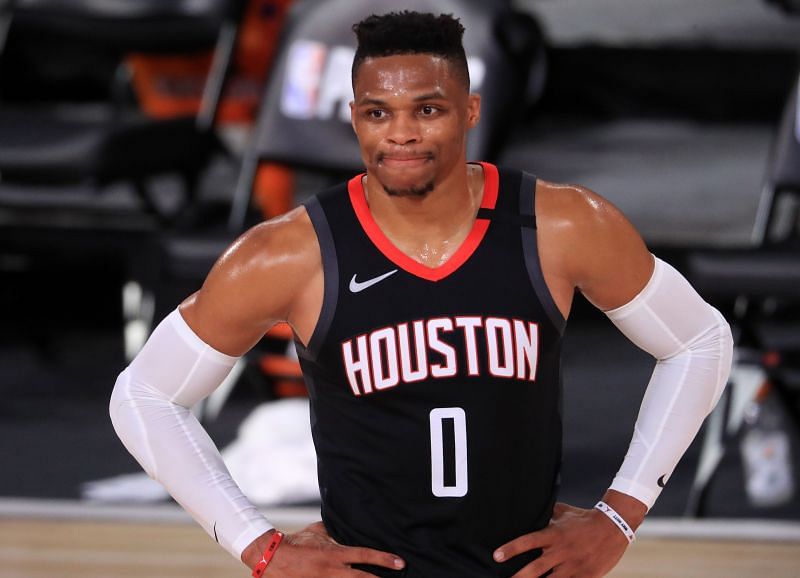 After yet another disappointing postseason run that was followed by the departure of Daryl Morey, the Houston Rockets have been surrounded by a whirlwind of NBA trade rumors which have speculated that the Rockets could look to trade away Russell Westbrook.

Former NBA player Jalen Rose has spoken about the same and has opined about what the franchise should look to do with Westbrook.

NBA Trade Rumors: Jalen Rose believes that the Houston Rockets could be better off without Russell Westbrook

During an interaction on the show ‘Jalen and Jacoby’, Rose had this to say in this regard:

Jalen Rose further went on to talk about how the efficacy of a teams’ offense gets reduced when the ball is taken out of the hands of the best player in their roster. In the Houston Rockets’ case, that player happens to be James Harden.

Rose’s words sound harsh but may be true. Russell Westbrook does indeed tend to take the ball out of James Harden’s hands. But the only thing it ever results in is Harden standing at half-court waiting for the rest of the team to attack.

.@kendrickperkins is TIRED of the Russell Westbrook disrespect!

“If you were starting a franchise right now, you are not gonna sit up here and tell me that you’re gonna pick Paul George over Russell Westbrook. That’s just not happening!” pic.twitter.com/56em5DyM3D

Keeping the ball in Harden’s hands may not only do the franchise a world of good but could also perhaps help them get further in the NBA Playoffs. And for this reason alone, the Houston Rockets must consider trading away Russell Westbrook this off-season.

When asked about what the future may hold for the Houston Rockets’ lineup after the firing of Daryl Morey, Rose had this to say:

“When you look at the Houston Rockets, next year they’re going to be a traditional basketball team.”

Rose further said that the exit of Daryl Morey could mean the return of normalcy in the Houston Rockets’ lineup, alluding that it could only be a ‘good’ thing for the franchise.

You might hate the contract (three years left, over $40M per), but a pursuit of Russell Westbrook — if the Rockets look to move him — has to be explored by the #Knicks. One reason why #NBA should root for it is how much it would wake up the NY market. Russ vs KD would be spicy.

Indeed, if the NBA trade rumors in this regard turn out to be true, the Houston Rockets could be a different side next season. However, it remains to be seen if the franchise would be better or worse of for that.

Also Read: NBA Trade Rumors – Why LA Lakers must go after Bradley Beal in their endeavor to add a third star alongside LeBron James and Anthony Davis.

Auto sales make a come back in China

Covid-19: Government identifying 30 crore who will get vaccine on priority