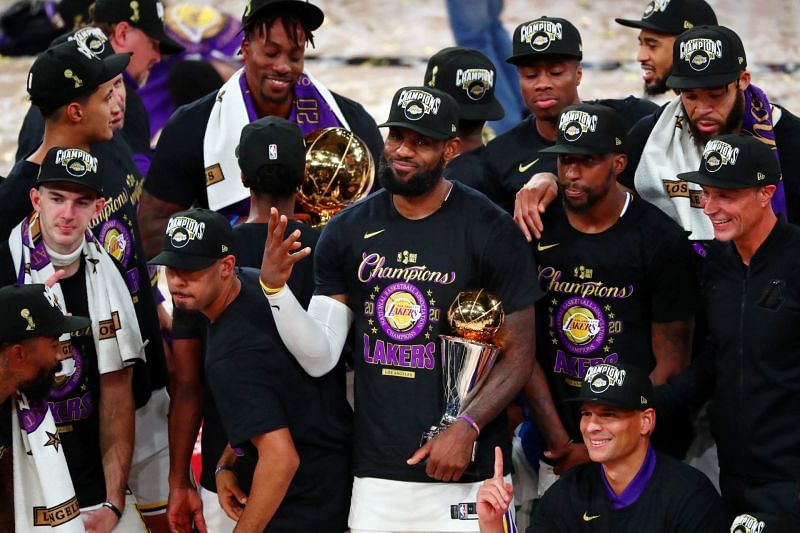 After winning the 2020 NBA Championship, the LA Lakers aren’t resting on their laurels. They team is aiming to repeat the feat and several NBA Rumors surround the franchise, given the short offseason duration in which they must attempt to add new pieces. While the Lakers were dominant last season, other contenders have already begun to improve and acquire new players. The LA Lakers must do the same if they intend to emerge from the increasingly difficult Western Conference.

For most of the offseason thus far, the LA Lakers were focussed on their centers. JaVale McGee and Dwight Howard were the topics of numerous NBA Trade and Free Agency discussions. After much deliberation, LA Lakers center JaVale McGee has picked up his player option worth $4.2 million and will remain a member of the LA Laker’s lineup for next season, as per The Athletic’s Shams Charania.

This gives the LA Lakers plenty to think about, as they have high-level centers on their roster for next season. With Dwight Howard establishing himself as a key piece in the 2020 NBA Playoffs and DeMarcus Cousins set to return from injury, many speculate that three-time champion, JaVale McGee, could be traded now that he has opted-in into his player option.

Apart from the three listed centers, Anthony Davis prefers to play center during crunch time and it wouldn’t make sense for the team to have four starting-caliber centers on the roster.

The Athletic’s Shams Charania reported that the LA Lakers have informed Quinn Cook that he is being waived by the franchise ahead of the 2020-21 NBA season.

The LA Lakers are trying to free up as much cap space as possible. Cook has a $1 million guarantee on his $3 million deal, which gives the LA Lakers $2 million in cap space. If the franchise decides to spread his $1 million over three years, it would give them an extra $667k. Cook played an average of 11.5 minutes per game and averaged 5.1 points.

Would NOT have won that 🏆 without them both! Thank you and love! By the way I’ll see y’all in person soon anyways. Lol. 🙏🏾✊🏾👑 https://t.co/MuBspVgHns

LA Lakers superstar LeBron James used his social media handles to bid goodbye to his teammates, Danny Green and Quinn Cook, while acknowledging that the LA Lakers wouldn’t have won the title without their help. Danny Green was traded to the OKC Thunder for Dennis Schroder earlier in the offseason.

Here’s Why Women Apply Long Vermilion During the Prayers

Working on Delhi Crime assuaged my guilt about moving on:…