Bollywood actress Kangana Ranaut congratulated the new Chief Minister of Maharashtra, Eknath Shinde, who took the oath as the 20th Chief Minister on June 30. The ‘Dhaakad’ actress shared a photo of the new CM and hailed his ‘inspiring success story.’ She also referred to him as one of the ‘most important and powerful people’ in India.

For the captions, Kangana Ranaut wrote, “What an inspiring success story….From driving auto-rickshaw for a living to becoming of the most important and powerful people in the country…congratulations sir” followed by a joined hand emotion. 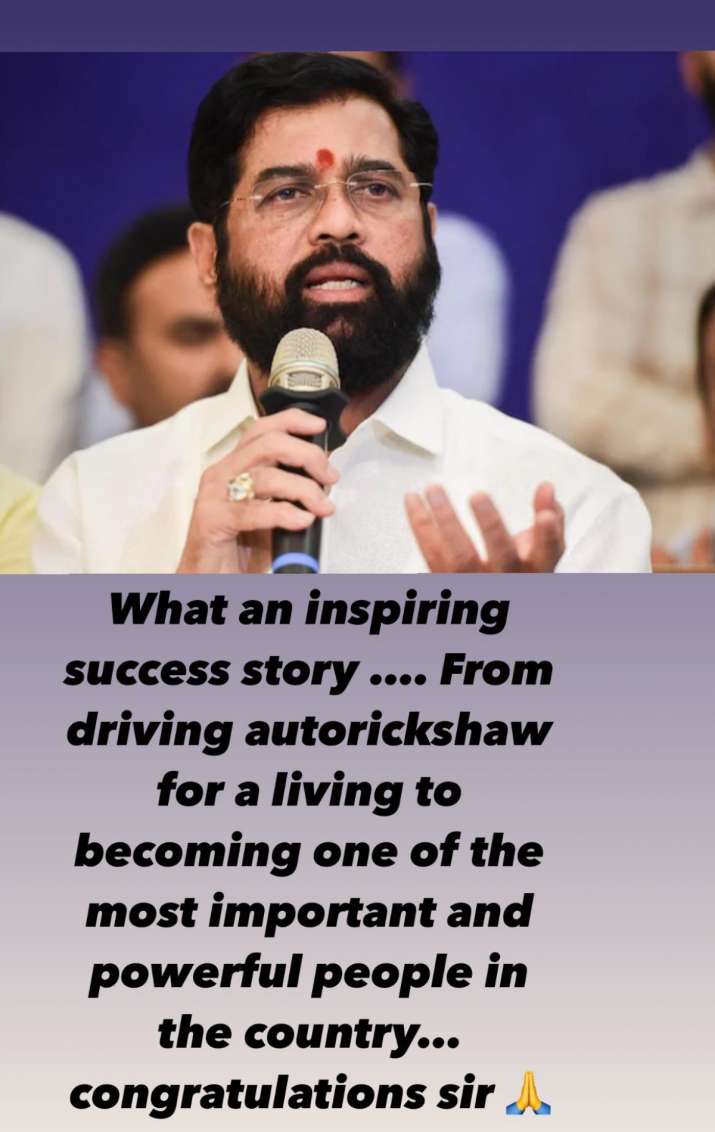 Meanwhile, the 10-day-long Maharashtra political potboiler came to an end, with rebel Shiv Sena leader Eknath Shinde taking oath as the Chief Minister of Maharashtra and Bharatiya Janata Party’s Devendra Fadnavis signing up as the deputy chief minister of the state.

Over the past few years, the ‘Manikarnika’ actor had been facing a rift with the former chief minister Uddhav Thackeray, and also slammed him on various occasions through her social media. ALSO READ: Kangana Ranaut recalls 2020 remarks made on Uddhav Thackeray as he resigns, says ‘jab paap badh…

The actress took a sharp jibe at Thackeray in her latest video posted on Instagram. She recalled the comments that she had previously made against Thackeray after the BMC demolished her office in Mumbai over alleged illegal construction. Also, she invoked the Hanuman Chalisa row and said ‘when evil takes over, destruction is imminent. After that, there is creation.’

“After 1975, this time is the most important time in history. In 1975, JP Narayan’s slogan had shaken the corridors of power. In 2020, I had said the democracy was a promise, those who break this promise due to arrogance, their pride would surely shatter,” she said in a video on Instagram. “Hanuman ji is believed to be the 12th avatar of Lord Shiva. Now if the Shiv Sena bans Hanuman Chalisa, then not even Lord Shiva could have saved them. Har Har Mahadev. Jai Hind, Jai Maharashtra,” Kangana Ranaut added.

Sharing the video, she wrote, “Jab paap badh jata hai toh sarvnaash hota hai aur usske baad sarajan hota hai (When evil takes over, destruction is imminent. After that, there is creation).. And the lotus of life blooms …”

The ‘Queen’ actress will be next seen in ‘Tejas’ in which she portrays the role of an Indian Airforce officer. The film is slated to release later this year. Along with that, she also has ‘Emergency’ in which she will be portraying the role of Smt Indira Gandhi.

Uncharted is getting its own roller coaster at…