Kangana Ranaut is known to speak her heart out without mincing any words. She never fails to express her opinions on the ongoing subjects related to films, politics or national interest. Recently, the actress took a dig at Akshay Kumar starrer Raksha Bandhan’s co-writer Kanika Dhillon after it was reported that she deleted her older tweets which were claimed to be ‘Hindu-phobic.’ The actress on Tuesday shared a media report stating that Kanika has removed her tweets which ‘hurt the religious sentiments of people’ and were ‘Hinduphobic’ in nature. It also mentioned that within a span of 30  minutes, Kanika had deleted 17 tweets.

Kangana captioned the post, “Ha ha nothing affects them as much as financial loss… only the fear of financial loss can make them delete Hindu phobic and anti India tweets, nothing else… interesting.” 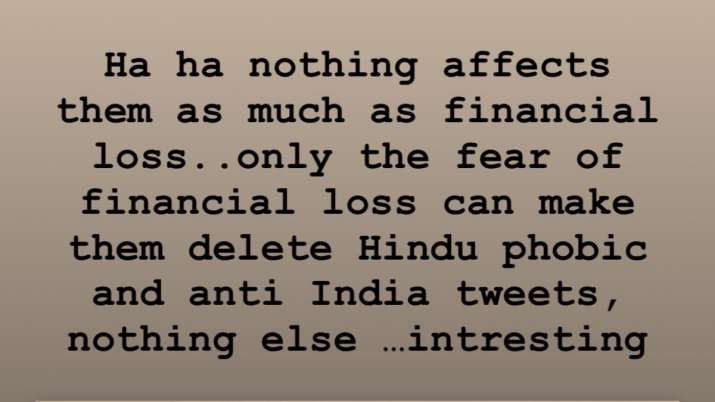 Meanwhile, ‘BoycottRakshaBandhan’ has been tredning on social media platforms ever since Kanika’s older tweets came to light. Social media users reshared her tweets claiming that she is anti-Hindu.

Raksha Bandhan stars Akshay Kumar and Bhumi Pednekar in the lead roles. The film is scheduled to release on August 11. To note, Raksha Bandhan marks Akshay’s second collaboration with Bhumi after their 2017 release Toilet: Ek Prem Katha. Directed by Aanand L Rai and written by Himanshu Sharma and Kanika Dhillon, the film is produced by Colour Yellow Productions, Zee Studios, and Alka Hiranandani in association with Cape Of Good Films.

Apart from Akshay and Bhumi, the film also features Sahejmeen Kaur, Deepika Khanna, Sadia Khateeb and Smrithi Srikanth who will be seen as Khiladi Kumar’s sisters. The film was shot in Delhi last year.

Watch the trailer of the film below:

Jane Hill: BBC presenter on the ‘cruel’ disease that runs in her family – ‘Terrifying’

Watch the Pokémon Presents stream at 3PM ET for updates on ‘Pokémon Scarlet,’ ‘Violet’ and more

The foldable iPhone is a pipe dream: here’s why Apple…

Automata Anime Will Tell an Original Story as Yoko Taro is…