The TV host and actress put up a “hugot” post on Instagram Saturday which featured the quote “Choose those who choose you.” She told followers she hoped to open a love life forum on the post.

Among the commenters was Batangas Vice Governor Mark Leviste who commented, “I choose you.”

While a fan, one @iammcg78, expressed excitement at a “social distancing courtship,” Aquino replied, “No thank you, no offense.”

She explained to another fan (@tetet_ig), “It’s not healthy to entertain someone when you know in your heart that feelings for another haven’t been totally extinguished.”

“Repairing what’s broken is a job only for the one who still grieves because the new person had nothing to do with what is your personal pain from the past,” she said.

“Unless I resolve that, I have no business letting someone new into my life.” 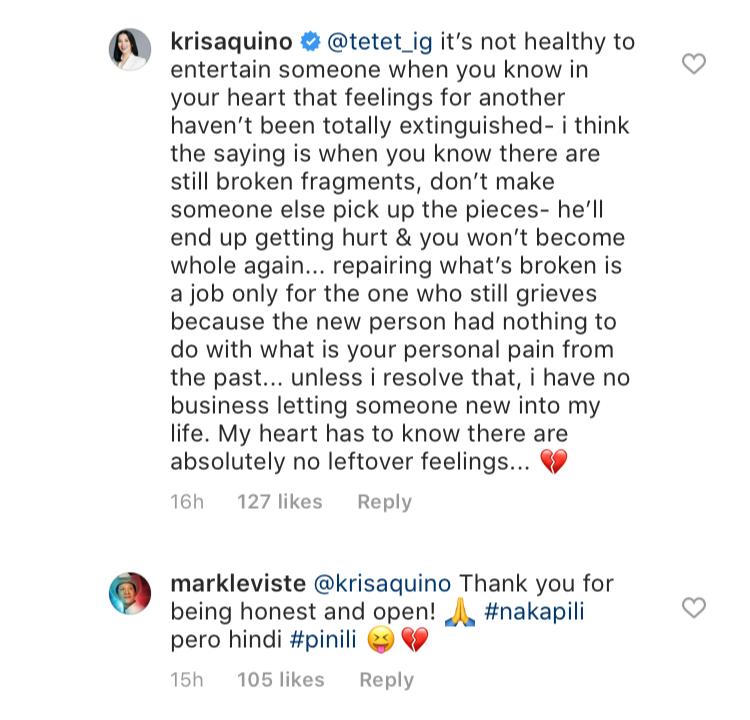 Leviste seemed to take the let-down well as he responded, “Thank you for being honest and open! #nakapili pero hindi #pinili (Made a choice but wasn’t chosen).”

Replying to another fan (@rrj_ljt73) who asked why she would not give him a chance, she mentioned that he lacked a “sensitivity chip.” “He wasn’t very polite [with] his text messages… that’s why I chose the safe out—bringing up someone from the past—it’s much more proper because nobody is to blame.” 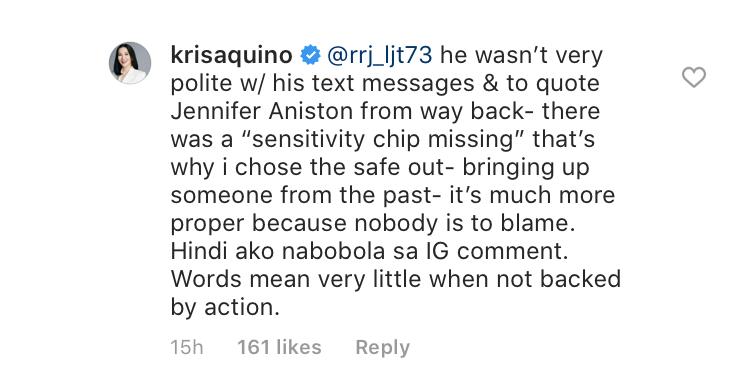 “Looking for someone single, aged 41?” he wrote.

Aquino told him upfront that she preferred to be friends after heartbreak by “players” and “elected officials.”

Her romantic history includes a previous marriage to PBA player James Yap and had a relationship with former Quezon City Mayor Herbert Bautista.