‘Latte and the Magic Waterstone’ Review: A Hedgehog’s Journey 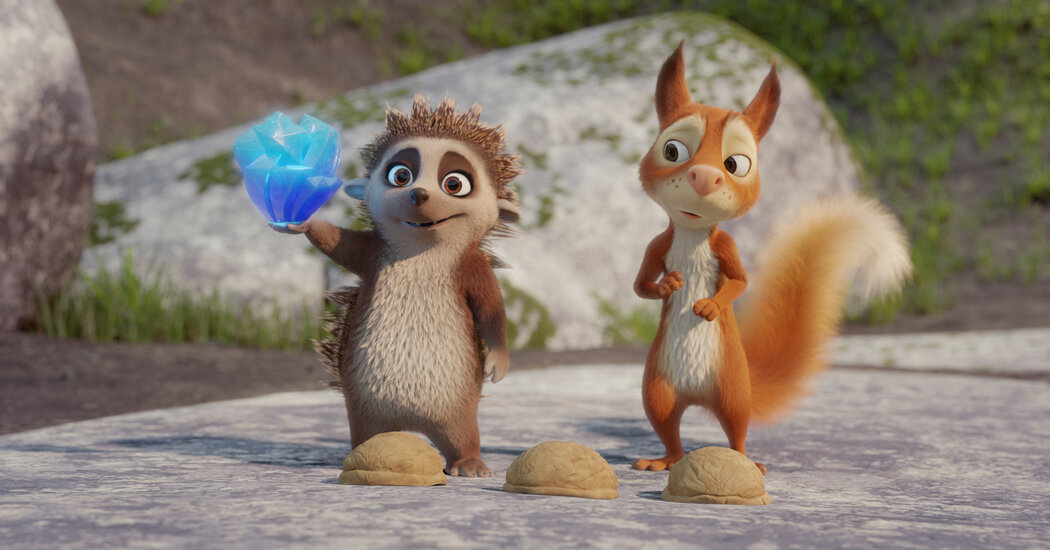 The new Netflix animated film “Latte & the Magic Waterstone,” the latest entry in a long, distinguished tradition of cute animals embarking on perilous Odyssean quests, serves up some sweetness but otherwise keeps its laughs mild and its themes unimaginatively simple.

Based on the children’s book by Sebastian Lybeck, and directed by Regina Welker and Nina Wels, the movie is about an impetuous, grouchy hedgehog named Latte and her anxious squirrel friend Tjum, who journey to reclaim a magic stone stolen by a bear king. The script, by Andrea Deppert and Martin Behnke, offers little by way of surprises, and the few idiosyncratic details (say, an eccentric, seemingly psychic frog and a sleuth of dancing, water-ballet-performing bears) aren’t exploited for their full comedic effect. The C.G.I. animation is generally too slick and oversaturated, though scenes when the film shoots for a mystical quality, with phosphorescent pink flowers and radiant, electric-blue crystals, are satisfying eye candy.

A hungry lynx, shifty wolves, rocky gulfs and rugged terrain: You can fill in the details on your own. But beneath the rote narrative, there’s a whiff of a note about class and society: the small woodland creatures struggling to survive while the royal bears, enjoying their place at the top of the food chain, lavish in their bounty in a majestic castle. And there’s the loner hedgehog, learning the value of community, rallying for a redistribution of resources for the benefit of all. Has the magic stone perhaps brought not just water but a lesson on the values of socialism?

Nah. “Latte” doesn’t want to scare off the tykes with too much big-kid politics, even though films like “Wall-E” and “Zootopia” have proved that more nuanced stories about society can work even in children’s films. It’s too bad too — Latte was looking a bit revolutionary, and a lot more fun, for a second.

Latte and the Magic Waterstone
Not rated. In German and English, with subtitles. Running time: 1 hour 29 minutes. Watch on Netflix.

Mike Trout’s newborn son was named with baseball in mind

Shirley Ann Grau, Writer Whose Focus Was the South, Dies at…

Doctors, students get busy in the kitchen

“Kevin Durant is the best NBA scorer ever”…