In a week in which DC Comics are launching all manner of new comic book characters, Stargirl: The Lost Children has more than any, even Lazarus Planet: Assault On Krypton. Some of them we know, versions of existing characters, some teased in previous Flashpoint Beyond, Golden Age and Stargirl comic books, some radical revamps of previous characters, some given Who’s Who listings and some brand new ones. 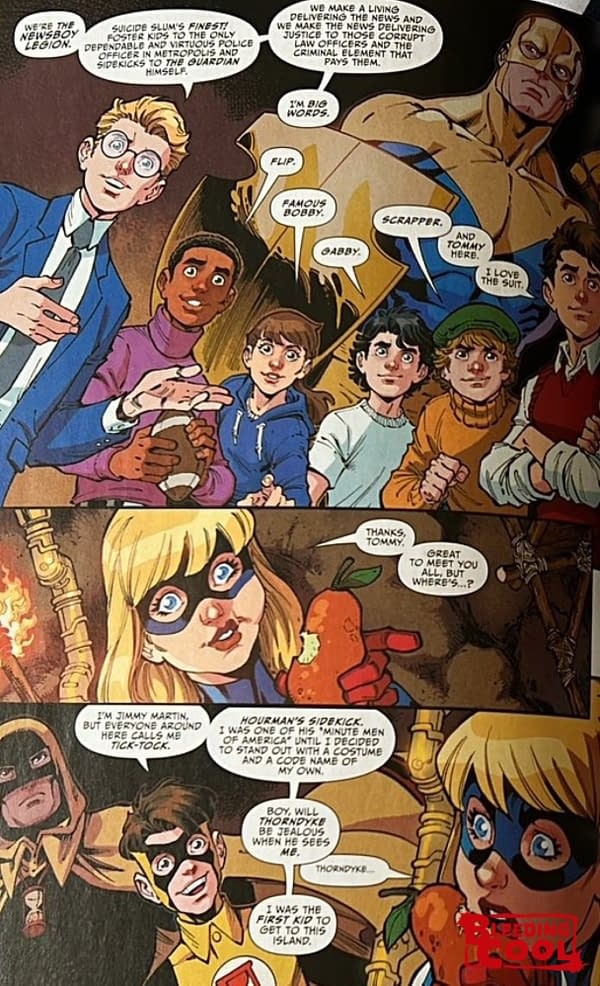 Beginning with the Newsboy Legion and Tick-Tock… a Golden Age character and also the name of the fastest growing social media app… that will be fun. 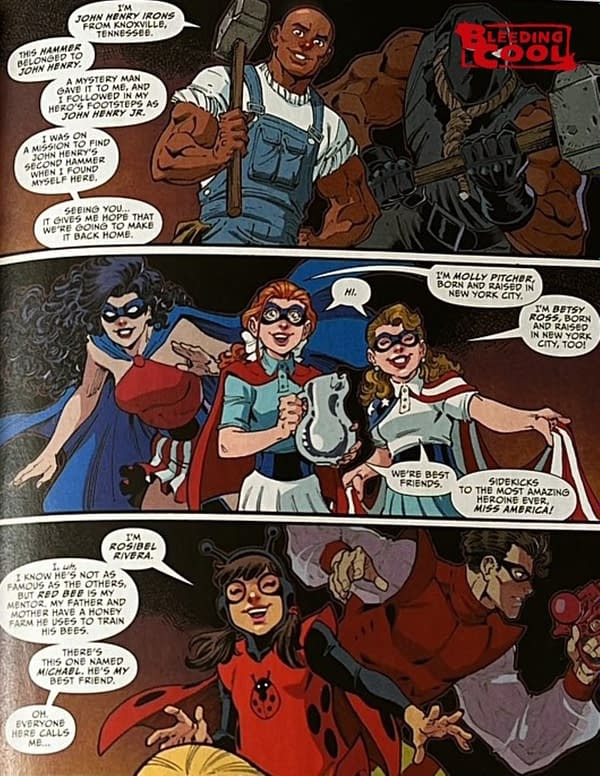 “John Henry Jr wields one of the hammers forged by John Henry. The hammer gave John Henry Jr. great strength, was seemingly impervious, and could create intense shock waves when striking the ground. The mysterious elderly man who gave John Henry Jr. the hammer urged him to seek out the other, believing there to be even greater power when both of John Henry’s hammers were wielded together. The other hammer was never found.”

“In the spring of 1941, one of the first female superheroes appeared on the scans In New York City—Miss America. Early in her career. Miss America saved a school from a mysterious saboteur, inspiring two outcast teenagers and best friends. Betsy Rose and Molly Preacher. to take up masked identities of their own to help find the criminal. Thus, Betsy Ross and Molly Pitcher were reborn”

“After immigrating with her parents to the United States from San Salvador, and without any friends, 14-year-old Rosibel Rivera spent the summer working on her parents’ honey farm, Big Bee Ranch. It was here she met Rick Raleigh, a local assistant district attorney who had a great interest in bees. What Rosibel did not know at the time was that Mr. Raleigh was the masked hero known as Red Bee and that her father, Miguel, was secretly helping Raleigh train his crime-fighting bees. “

“Salem Rula Nader is the daughter of an Armenian American immigrant and a woman who fled the tabled city of witches and warlocks, Limbo Town. In 1936. Salem’s parents abandoned their six-year-old daughter to save themselves from the “Limbo Town Curse” and retreated to an unknown dimension. Young Salem was left to inherit her mother’s Limbo Town Curse.”

“In 1943, Gloria James’s father, Professor Bran James, worked with Roy Lincoln as a chemist, helping him develop a liquid that could open any lock without damaging it_ Professor James was killed during an attack on the lab by a pair of criminals looking to steal the lock-solving liquid for themselves. Upon learning of her father’s death, Gloria also discovered that Roy Lincoln was the controversial new hero known to authorities in Washington. D.C. as the Human Bomb. “

“Raghu Seetharaman was sent to an orphanage at the age of 10 after his parents tragically died in a fire. Raghu found an old book of trivia and thus began his lifelong obsession with knowledge. In high school. Raghu played in teen trivia competitions across the United States, earning the nickname “Quiz Kid”.”

And courtesy of Cory Baxter, the side-kick of Rip Hunter, Time Master, your first proper full-on appearance of The Boom, Judy Garrick, daughter of Jake Garrick…

“Judy Garrick, the daughter of Jay and Joan Garrick ,was the Boom, teenage sidekick to the first Flash. Jay first met Judy when she accidentally traveled back in time and helped her father during one of his earliest adventures in 1940.” 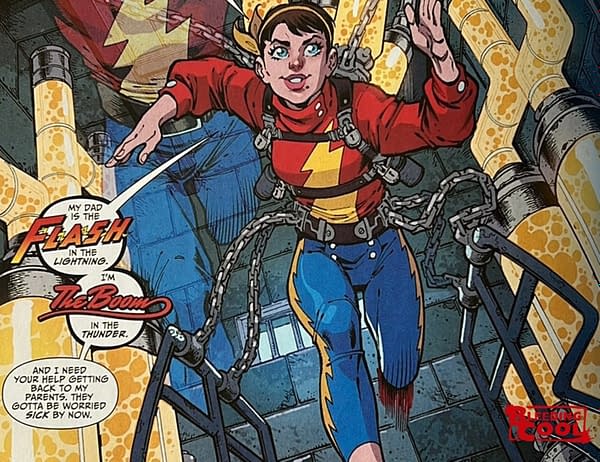 All heading in your direction this week… among many others…

STARGIRL THE LOST CHILDREN #3 (OF 6)
(W) Geoff Johns (A/CA) Todd Nauck
Stargirl comes face-to-face with the eighth soldier of victory, Wing, and a whole host of sidekicks from the past! But amongst the familiar faces are many Courtney’s never even heard of before. Where are these kids from, what happened to them, and why were they erased from time?! The New Golden Age continues here!
Retail: $3.99 In-Store Date: 01/17/2023