WhatsApp may soon let you hide your online status

Streaming in Canada on Prime Video, Crave, Disney+ and…

Jul 3, 2022
Google has been known to release information about an upcoming Pixel model well in advance of its release in an effort to cut off third-party leaks. It did this with the Pixel 4 and last month during I/O, it displayed photos of the upcoming Pixel 7 series. Toward the end of the month, a Pixel 7 prototype ended up on eBay and a few days after that, a Pixel 7 Pro prototype was sold to a Reddit subscriber on Facebook Marketplace.

Besides Pixel 7 series prototypes, Pixel 6a units have gone up for sale before being officially introduced

The gentleman who purchased the Pixel 7 Pro had no idea that the device he had bought had not yet been officially announced by Google. In fact, he thought he had purchased a Pixel 6 Pro even though smartphone enthusiasts can easily distinguish between the rear camera bars on both models. The guy who bought the Pixel 7 Pro prototype was able to use it for about three weeks before Google caught on and wiped the device. 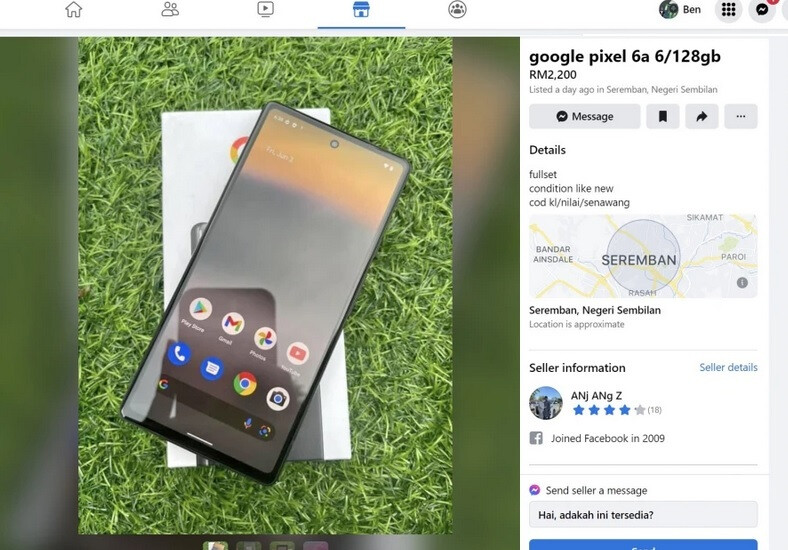 On Facebook Marketplace, some one has been selling the Pixel 6a which has yet to be officially announced

And as they say in those late-night television ads, “Wait! There’s more.” According to a tweet from German writer Nils Ahrensmeier (via 9to5Google), there is a listing on Facebook Marketplace posted by someone out of Malaysia trying to sell a Pixel 6a. Yes, the Pixel 6a was already made official on May 11th. However, pre-orders won’t begin until July 21st and the mid-ranger won’t be released until the following week (July 28th).
The person offering the Pixel 6a in advance (at a price in Malaysian currency equivalent to about $500) previously had posted the unboxing of the device on a TikTok video. Unlike the Pixel 7 and Pixel 7 Pro units sold, the Pixel 6a handsets do not appear to be prototypes and have simply been sold too early. That doesn’t mean that it is okay for you to buy one and use it.

Surely Google will seek to lock the phones just as it did with the Pixel 7 Pro prototype that was sold. And the manufacturer would be well within its rights to do so. The Pixel 6a will be equipped with a 6.1-inch OLED display with a 1080 x 2400 resolution screen. That works out to an aspect ratio of 20:9 and the display will refresh at 60Hz which was the standard refresh rate for smartphones a few years ago.

Under the hood, we should find the same 5nm Google Tensor chipset built by Samsung that is used to power the Pixel 6 and Pixel 6 Pro. The mid-ranger will sport 6GB of power-efficient LPDDR5 memory along with 128GB of storage (UFS 3.1).

On the back, the Pixel 6a will feature a primary camera with a 12.2MP sensor, and a second camera (this one ultra-wide) backed by a 12.2MP sensor. The front-facing hole-punch selfie snapper features a sensor weighing in at 8MP. As usual, the star of the show will be Google’s photo production capabilities. The 4410mAh battery will charge at 18W. The phone will come out of the box with Android 12 pre-installed.

The phone will be updated three times by Google to Android 13, Android 14, and Android 15. It also will get five years of Android security updates.

Color options for the Pixel 6a include Sage, Chalk, and Charcoal. Since there aren’t multiple configuration choices to pick from (6GB of RAM and 128GB of storage is the only option available) the process of buying the phone might seem easier, especially with just one price to remember. For example, in the states, the Pixel 6a will cost $449.

It was not designed to be a casting coup

WhatsApp may soon let you hide your online status

These 5 Netflix releases will have people glued to their…

The CIA’s Undercover Girl in Magazine…