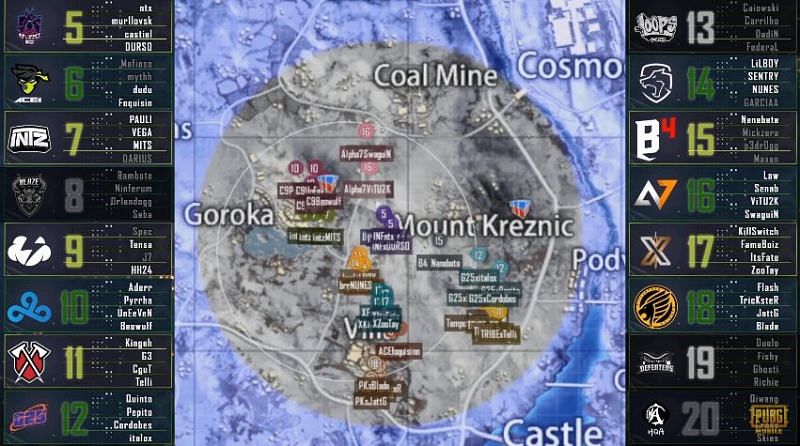 Day 15 of the PUBG Mobile Pro League Americas Season 2 has concluded, with Team Queso maintaining their pole position in the overall table. Twenty-four top teams from the region, split into three groups, are battling it out in the League Stage.

The League Stage of the PUBG Mobile Pro League Season 2 Americas will go on till 18th October, i.e today, with the top 16 teams set to advance to the finals that are scheduled from 22nd September to 25th October.

Day 3 of the fourth (last) week of the PMPL Season 2 Americas started with Execute winning the first match on Vikendi with six kills. INTZ took four frags while Cloud 9 notched up five kills to finish in third place.

The second game on Erangel saw a victory for Team Queso, who picked up nine kills. Loops Esports secured the second position with nine eliminations.

Tempo Storm emerged victorious in the third match on Vikendi with twelve eliminations to their name while The Unnamed claimed ten kills to finish in second place. Cloud 9 finished third with four frags to their name.

The fourth game of the day, which took place on Miramar, was won by The Unnamed, who registered nine kills while Execute finished second by laying waste to eight enemies. Meanwhile, Loops Esports eliminated 10 players in the lobby.

Loops Esports emerged victorious in the final match of Erangel with 4 kills while Tempo Storm went on full aggressive mode and took 13 kills in the match.

Patriots vs. Broncos coverage map: Where can NFL fans watch the Week 6 game on TV?

BJP leaders in Bihar hitting out at LJP under pressure from Nitish Kumar: Chirag Paswan