Review: A Sci-Fi Classic Featuring a Multiverse of Stooges 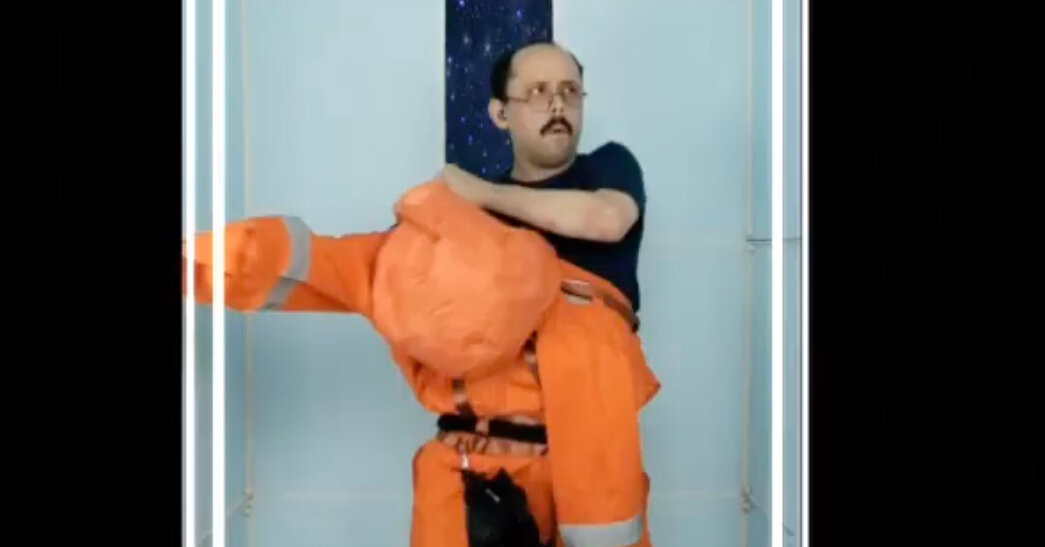 With its freshly color-coded cardigans, my pandemic closet was looking pretty sharp, I thought — until I saw Joshua William Gelb’s. Soon after Covid-19 hit New York, he emptied his, painted it white, reinforced it with plywood, removed its door and turned it into a cross-disciplinary performance lab. (Here’s how he did it.)

You wouldn’t think that the 4-foot-wide by 8-foot-tall space, approximately the same shape as an iPhone screen, would be big enough for a play, let alone an avant-garde company. Yet the closet, only 2 feet deep, is one of the stars of Gelb’s Theater in Quarantine series, which since late March has produced, on a biweekly schedule, some of the new medium’s most imaginative work from some of its simplest materials. As in silent movies, clowning, movement and mime are usually part of the mix.

“The 7th Voyage of Egon Tichy,” which was livestreamed on Thursday evening and will remain available in perpetuity on Gelb’s YouTube channel, has all of those and then some. Based on a 1957 story by Stanislaw Lem, the Polish science fiction writer most famous for “Solaris,” it concerns an astronaut named Egon who, passing through a minefield of gravitational vortexes, is caught in a causal loop paradox that bombards him with innumerable (and insufferable) alternative selves.

Lem’s story is a satire of the infinite human capacity for self-defeat, with the various Egon incarnations bickering and undermining one another as the gyrations of space-time bend them into conflict. When “a meteor no bigger than a pea” pierces the ship’s hull, destroying the rudder, everyone has ideas about fixing it — but since it’s a two-man job, making cooperation essential, nothing actually gets done. Philosophical cleverness is the story’s top note; beneath it you may scent the sad bouquet of solitude, even among a crowd.

That makes the tale wonderfully apt for our social-distancing moment, if not an obvious match for a small camera and a tiny stage. Adapting Lem’s story, the playwright Josh Luxenberg has thus replaced the satire with slapstick: The virtuosic Gelb, playing all the Egons, is often to be found wriggling through his ship’s trapdoors or bopping himself on the head with a skillet. Instead of Intergalactic Groundhog Day the result is more like the Three Stooges in Space, except there are as many as 26 stooges involved and they’re all as bossy and testy as Moe.

If the closet, representing all the chambers of the spaceship, is one of the show’s stars, the other is Gelb himself; no other humans appear in “The 7th Voyage” — nor have any appeared live so far in the Theater in Quarantine series. That’s in part because Gelb, who has asthma, is loath to leave his East Village railroad flat or otherwise take risks with the coronavirus. But, chicken-and-eggwise, that sense of isolation is also the product (or result) of a bracing aesthetic that can arise from deprivation.

Not that the production is technologically impoverished. Using standard phones, cameras and computers running software repurposed for digital production, the director Jonathan Levin has devised a sophisticated mise en scène. To “stage” the multiple-Egon scenes, he layers recorded takes of Gelb with live ones in which he interacts with himself. By turning the camera 90 degrees, he creates scenes that simulate weightlessness and horizontality, much as the director Stanley Donen made it appear, in “Royal Wedding,” that Fred Astaire was dancing on the ceiling. In this case, though, lacking a rotating set on an MGM soundstage, Gelb has to adjust his posture to create the illusion of floating at the top of the closet while actually supine on its floor.

Considering the shoestring budget — Theater in Quarantine, working with Sinking Ship Productions, put the show together for $6,000, most of it going to pay the artists — “The 7th Voyage” looks and sounds terrific. The set and costume design by Peiyi Wong are homemade marvels reminiscent of both Cornell boxes and coffins; the staticky video design by Jesse Garrison and the spacey music by M. Florian Staab smartly update the ominous vibe of 1950s sci-fi.

But as is often the case with new modes of presentation, hyperattention to surfaces comes at some expense to depth. Even at only 35 minutes, “The 7th Voyage” is emotionally slim, with a busy skin and not much psychology. Likewise Lem’s story, which implies truths without filling them in, can read like a mathematical proof. Both are elegant and nimble and dry.

That’s not necessarily a bad thing, especially as established theaters wait out the pandemic, lumbering and slumbering toward Bethlehem. It’s more of a nascent thing. Theater in Quarantine only recently added words to its repertoire; in May it presented “an unauthorized edit” of Beckett’s “Krapp’s Last Tape.” (An adaptation of “The Secret Miracle” by Borges is scheduled for Aug. 27.) But as the company advances further into spoken theater, I hope it finds ways to flesh out its smart playfulness with — how can I put this? — more human gravity.

Coronavirus Pandemic: You Will Be Fined For Driving Without…