Review: ‘In Love and Warcraft’ Serves Romance for Noobs 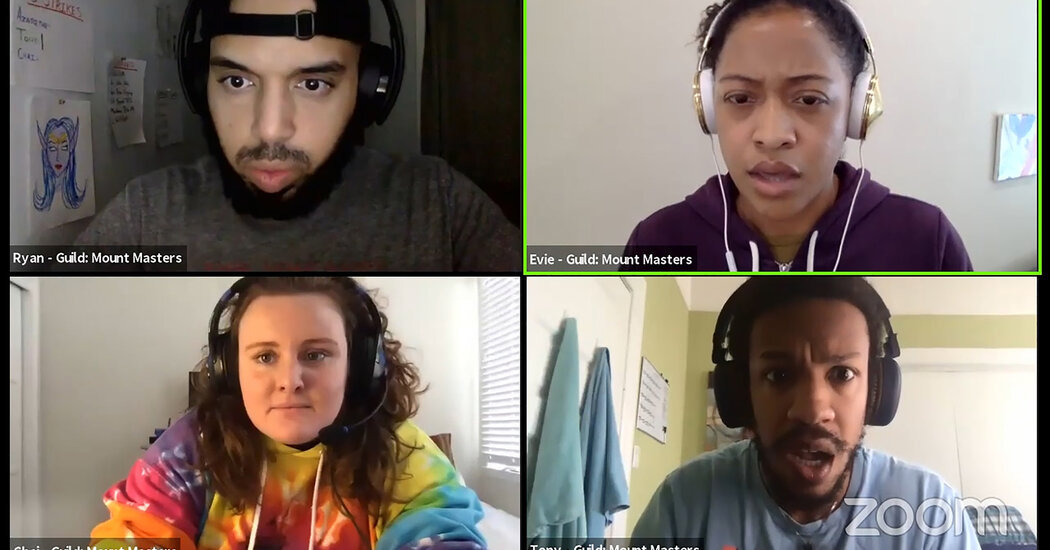 Thirty-seven years ago, a wise woman with teased hair and a leopard-print skirt told us that love is a battlefield. Pat Benatar wasn’t talking about the battlefields of Azeroth, the world of the popular online role-playing game “World of Warcraft,” but surely warring mages and paladins, too, may fall victim to the affairs of the heart?

The answer is yes — at least according to the dated clichés and gender politics in “In Love and Warcraft,” presented via Zoom by the American Conservatory Theater and Perseverance Theater. The play, written by Madhuri Shekar and directed by Peter J. Kuo, follows a young woman who is an avid player of the fantasy game and struggles with intimacy in our age of ubiquitous screens. Though it premiered onstage in 2014, the play could have been a timely comedy for our isolated times, and yet the antiquated writing and stumbling execution never measure up.

“In Love and Warcraft” covers familiar rom-com territory: Take “The Big Bang Theory,” with its nerdy socially awkward protagonists and the problematic pro-incel depictions of relationships, and you already have the spirit. College senior Evie (Cassandra Hunter), a gamer with an online boyfriend she’s never met in real life, is inexperienced when it comes to sex and dating, yet she has a Cyrano de Bergerac-esque side hustle ghostwriting love letters for sweethearts unable to put words to their affections. But when she falls for a client, Raul (Hernán Angulo), she’s forced to confront her own hangups about dating IRL.

Let me make a proposition here and now: Death to the virginal nerd trope. Or, at the very least, let’s make it a little more interesting.

Evie has a unique philosophy of love. She approaches relationships like she approaches gaming — a series of strategies and maneuvers to get the intended result. But the character is little more than a 2-D rendering. Even when the play graduates her naïveté and first-time sex jitters into a psychological inhibition, it spends too long spinning its wheels about the source of her romantic discomfort (Is she asexual? Is she gay? Has she been a victim of assault? Has she had some other traumatic experience?) before ultimately shrugging it off.

The rest of the cast (Wesley Guimarães and Madeline Isabel Yagle) struggle to draw substance from the other characters, too — largely pointless fluff figures, like a sassy gay hairdresser with bloody sex tales and a fake Hispanic accent. The actors — all members of ACT’s MFA class — are earnest, but their performances lack chemistry and depth. And Kuo’s sluggish direction, alongside the superfluities of Shekar’s script and the cast’s aerobic attempts to breathe life into inconsequential characters and static scenes, make the two-hour show feel interminable.

There’s also the matter of the technology: The production often tries to present the illusion of characters being in the same room, but the screens are often misaligned, so the characters aren’t always on the same plane or even facing the right direction. And for a show that draws on the world of gaming, there’s little incorporation of gameplay until a final scene, when an extended sequence throws us into Azeroth but then leaves us there for too long.

There’s more than enough material here for an innovative production — one about alternative ways people choose to connect outside of traditional, heteronormative models; one that has more fun with the theme of online gaming and draws more affectionately from the unique relationships and communities people build through them; or one that takes into account more generally the way so many of our social interactions are built around technology.

For all the magic and adventure promised by the game central to its premise, “In Love and Warcraft” fails to take things to the next level.

In Love and Warcraft
Available on demand through Sept. 25; act-sf.org