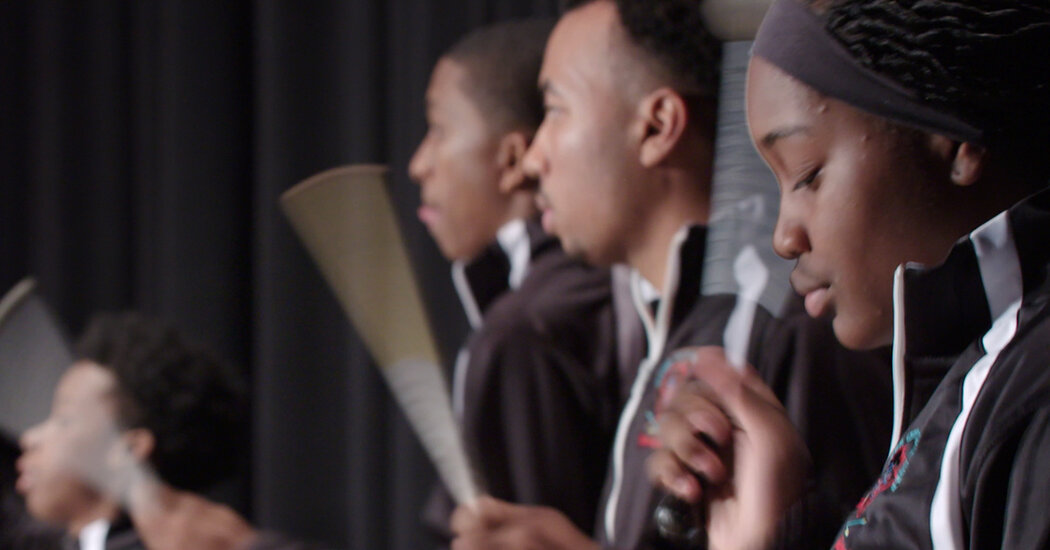 Early on in the beautiful documentary “River City Drumbeat,” two leaders from the River City Drum Corp teach elementary school students in Kentucky a drum lesson. Albert Shumake, a new father who has been involved with the corp since his childhood, inspires students by bringing them back to their elemental beginnings. He reminds the class that the first sound they heard was their mother’s heartbeat. As he speaks, his mentor Nardie White accompanies him on a drum, following Shumake’s lead with a solid and simple beat.

River City Drum Corp — the grass-roots community center at the heart of this profile from the filmmakers Marlon Johnson and Anne Flatté — offers drum classes for children from early childhood to their high school graduation. Its founder, White, recalls building the center from the ground up with his late wife, Zambia Nkrumah, in an effort to give children a chance to engage with Black art and history. Shumake wonders in awe at where he might have been without the drum program. And some of the students whom White and Shumake shepherded reflect gratefully as they look ahead to college. By the end of the film, White will pass the leadership of the River City Drum Corp to Shumake, handing over the stewardship of the community they share.

The documentary is shot in a vérité style — there are no talking heads, and we learn who the subjects are by spending time with them, simply observing them at home and at the center. Though the movie does include footage of drum performances, it doesn’t move at the clip of sticks on snares. Instead, the film listens for this community’s heartbeat, finding its steady pulse just as expected: healthy and strong.

How to download Free Fire from Google Play Store in 2020

loan restructuring: Recast of individual loans due to coronavirus: Who, how and when