Salman Rushdie stabbing: “I am shaken beyond words. Appalling,” Kangana Ranaut said reacting to the gruesome attack on Salman Rushdie. Rushdie, who faced Islamist death threats for years after writing “The Satanic Verses”, was stabbed by a 24-year-old New Jersey resident identified as Hadi Matar on stage on Friday while he was being introduced at the event of the Chautauqua Institution in Western New York. A bloodied Rushdie was airlifted from a field adjacent to the venue to a hospital in northwestern Pennsylvania where the 75-year-old writer underwent surgery.

“Another day another appalling act by jihadis. The Satanic Verses is one of the greatest books of its time… I am shaken beyond words. Appalling,” Kangana said in a statement shared by the actress on her Instagram Story. 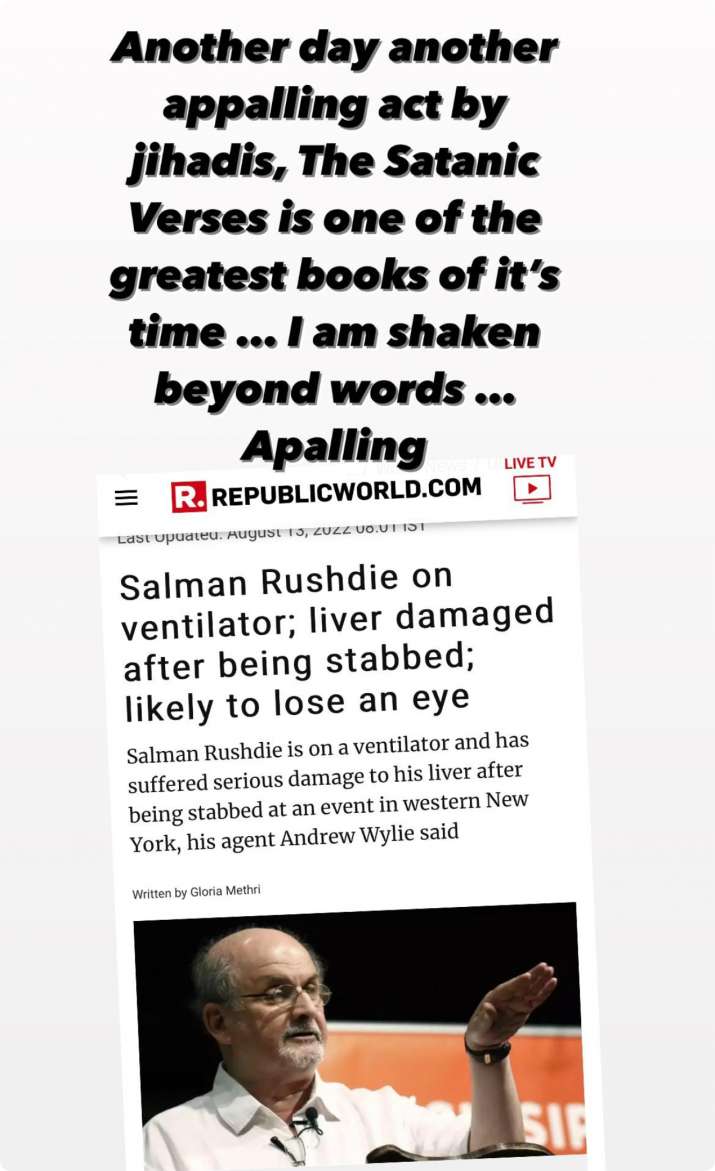 In a statement late Friday night, Rushdie’s agent Andrew Wylie said: “The news is not good… Salman will likely lose one eye; the nerves in his arm were severed; and his liver was stabbed and damaged,” dpa news agency reported. The attacker stormed the stage at the event held in the Chautauqua Institution attended by hundreds of people at around 11 a.m. on Friday and stabbed the 75-year-old Indian-born novelist, according to a police spokesman.

Several event staff and spectators then rushed the suspect and brought him to the ground and a police officer arrested the 24-year-old male identified as Hadi Matar from Fairview, New Jersey.

Rushdie was treated by a doctor who was in the audience until rescue workers arrived and took the author to hospital by helicopter.

He was stabbed at least once in the neck and in the abdomen, authorities said. Rushdie, who won the Booker Prize for his novel “Midnight’s Children”, was unable to speak. He “will likely lose one eye; the nerves in his arm were severed, and his liver was stabbed and damaged,” the writer’s agent Andrew Wylie told The New York Times.

The attacker is thought to have acted alone, the spokesman added.

Rushdie was giving a lecture at a cultural centre as part of a series titled “More than Shelter” which intended to discuss the US as a safe haven for exiled writers and persecuted artists. Because of his 1988 work “The Satanic Verses”, a fatwa was issued against Rushdie by then-Iranian revolutionary leader Ayatollah Khomeini calling for the author’s death.

Some Muslims felt their religious sensibilities were offended by the work.

Whether Friday’s attack was at all related to the decades-old fatwa was unclear.

The author spent about 10 years under police protection in the United Kingdom, living in hiding after Iran’s late leader Ayatollah Ruhollah Khomeini issued a fatwa calling for Rushdie’s execution.

A bounty of over USD 3 million has been offered for anyone who kills Rushdie, who has been a prominent spokesman for free expression and liberal causes.

Since 2000, Rushdie has lived in the United States.

Rushdie was being introduced at about 10:45 am when the assault happened, CNN quoted a witness as saying.

Alone in the Dark is coming back for more scares – Destructoid

YouTube works on an online store for its Streaming Video Services: Report

Tips And Tricks For Avoiding These Common Mistakes While…