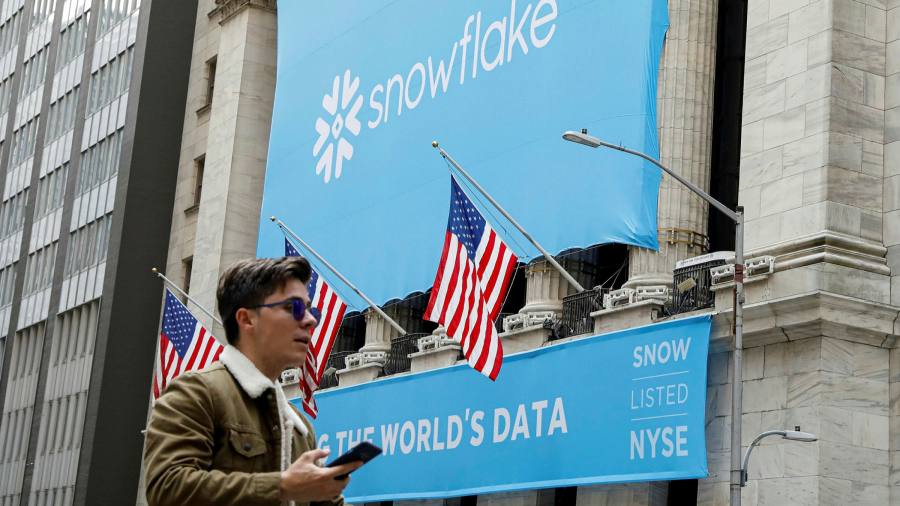 Irrational exuberance or the new reality? The US stock market rally that has shrugged off the pain in the real economy in the wake of Covid-19 shows little sign of running out of steam. Despite markets falling back since the August peak amid fears of a resurgence of the virus, investor appetite for equities remains undimmed. Wall Street just witnessed its biggest week for initial public offerings since May last year, when Uber came to market. Shares in Snowflake, a cloud-computing business, doubled on their first day of trading on Wednesday, valuing the lossmaking company at more than $70bn.

The extraordinary rally has been driven as much by exceptional monetary policy as by growth-hungry investors fearful of missing out on the next Tesla. On the same day as Snowflake’s initial public offering, the Federal Reserve signalled it expected to keep interest rates near zero at least through 2023. This promise of cheap money for longer is helping to push cash into the market — there is a scramble to invest in nearly everything on offer.

The obvious example of this is the boom in special-purpose acquisition vehicles, or Spacs, which list their shares on the premise that the promoters have a great deal lined up in the future that will make their backers a decent return. Seasoned financiers, entrepreneurs and former politicians are all putting their names to Spacs, with tens of billions of dollars raised on little more than the hope that these plans for deals will come to fruition.

Stock market bears fear a repeat of the 1990s dotcom bubble that prompted Alan Greenspan’s warning of irrational exuberance. That era saw internet companies achieve inflated valuations based on little more than hot air, while stocks of other companies were shunned. Today’s bears point to the stretched valuations of many recent IPOs as well as the indiscriminate appetite for shares of any business that can claim the technology badge. The usual metrics of valuing a company’s prospects have been dropped in the rush to catch the next rally.

There are crucial differences this time round. The fundamentals of the Big Tech companies that have driven the market rally are built on more solid ground, with strong balance sheets and cash-generating capability. A greater cause for concern, however, lies in the dominance of these stocks — which has only been amplified during the pandemic. Analysts at JPMorgan point out that the combined weighting of technology and communications stocks, as well as Amazon, in the S&P 500 index is 45 per cent. That contrasts with a concentration of just over 20 per cent for financials at the height of the credit bubble ten years ago.

This skewed nature of the market comes with the obvious risk that if any of these titans stumbles, it could trigger a wider sell-off, bringing down retail investors with it. Recent falls have taken some of the froth out of tech stocks, but many small investors are turning to more risky equity derivatives, hoping to maximise their gains if stock prices rise.

The coming months will test the market’s resilience. Schools have reopened and people are returning to their offices even as coronavirus cases rise in parts of the US and much of Europe. Equities might not so easily shrug off the damaging effects of lockdowns a second time around. A contentious US election will add to the volatility. There are clear signs of a market bubble, yet for the foreseeable future low rates will keep supporting equities and buoy the hopes of many that the rally is the beginning of a new reality. The real test will come when the easy money tap is turned off by central banks.

Tweet Buster: Power of smallcaps, price vs value & market movies to binge on

The Edge talks U2’s ‘All That You Can’t…