It was in December 2019 that Triumph Motorcycles had announced collaboration with Eon Productions for the upcoming James Bond movie ‘No Time To Die’. Now, the company has taken the wraps off the limited edition Triumph Scrambler 1200 Bond Edition. As the name suggests, the Scrambler 1200 gets a 007-inspired paint scheme along with 007 branding all around the motorcycle. Triumph will manufacture only 250 such units and each unit will get an individually-numbered plaque billet riser clamp, each one will be completely unique. Customers of the Scrambler 1200 Bond Edition will also get a special James Bond handover pack which includes a numbered letter hand-signed by Triumph’s CEO Nick Bloor, a beautiful Scrambler 1200 Bond Edition bike cover, and a premium leather rucksack. This is the first time a motorcycle has been officially linked to a Bond movie. 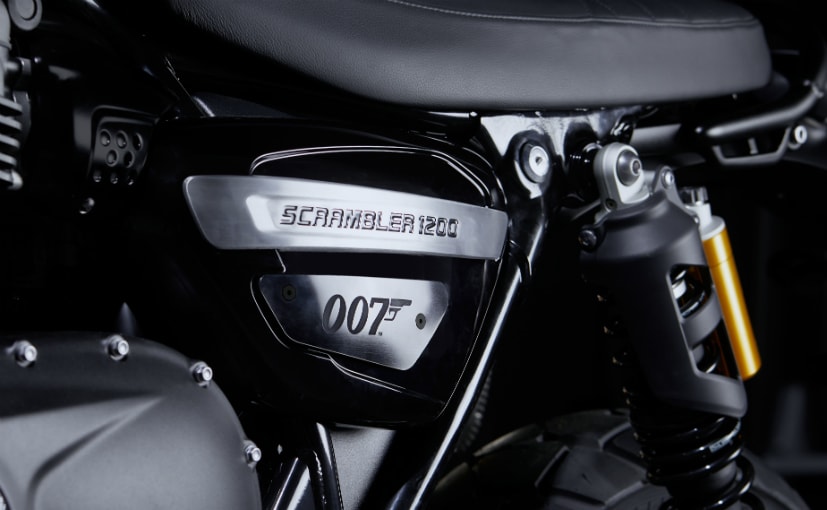 The Scrambler 1200 features prominently in the 25th James Bond movie ‘No Time To Die’ where the titular character is played by Daniel Craig. Inspired by the motorcycle ridden in the movie, the Scrambler 1200 Bond edition is based on the top-spec Scrambler 1200 XE variant and apart from the distinct paint scheme, the motorcycle gets an exhaust number board and 007 branding on the lower side panels. The leather seat also gets an embroidered logo and even the instrument console has a unique ‘Bond’ inspired startup screen. The Bond-inspired motorcycle also gets blacked out front forks, high value engine badges with gold accents, Arrow silencer with carbon fibre end caps, headlight grille and a variety of black anodised bits. The Scrambler 1200 Bond Edition is powered by the Bonneville 1200 cc, liquid-cooled, parallel-twin engine tuned to put out 89 bhp at 7,400 rpm and 110 Nm of peak torque at 3,950 rpm. The Triumph Scrambler 1200 XC comes with a full-colour TFT screen with a long list of features, and also includes optional Bluetooth connectivity which offers turn-by-turn navigation and even GoPro controls from the handlebar. The Scrambler 1200 XC offers a choice of six riding modes as well – Road, Rain, Sport, Off-Road, Off-Road Pro and a customisable Rider mode.

The new Triumph Scrambler 1200 Bond Edition is available to order in markets around the world from today. We expect a few units to be sold in India as well. The prices for the motorcycle are yet to be announced.

UK Car Output Could Fall To Lowest Level In Decades After…

The cry of the heart that had to be answered