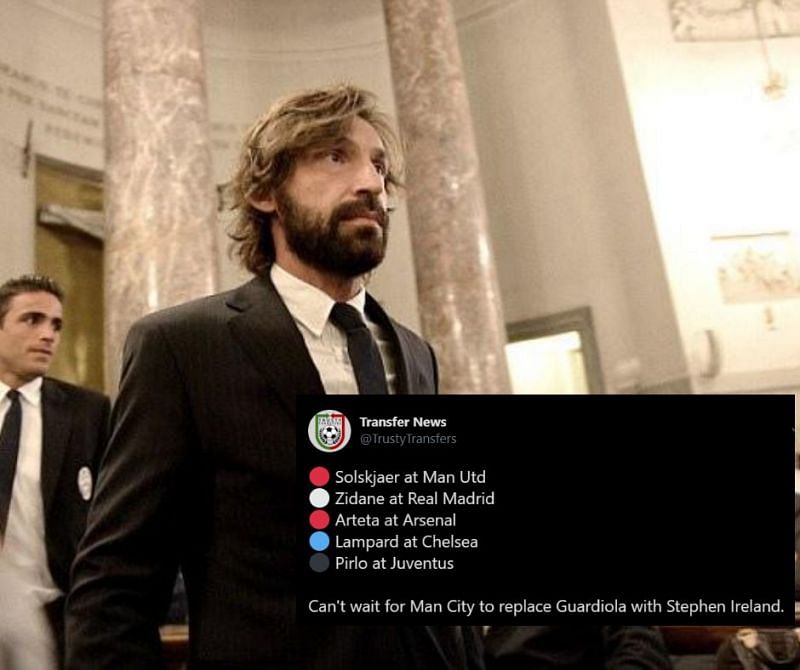 Hours after sacking manager Maurizio Sarri, Juventus are set to name former captain Andrea Pirlo as the new manager of the club. The Italian World Cup winner was appointed as the head coach of the Under-23 team only 9 days ago; quite the promotion.

Juventus crashed out of UEFA Champions League last night courtesy of away goals, despite a 2-1 win over Lyon in the second leg of their round of 16 clash. The club hierarchy have since moved swiftly and axed Maurizio Sarri, who had recently lifted the Scudetto with the Old Lady.

Many established names including Zinedine Zidane, Mauricio Pochettino, and Antonio Conte were linked with the vacant managerial position. However, according to a plethora of Italian outlets, including reliable journalist Fabrizio Romano, Pirlo is set to be announced as the the new manager of the Old Lady.

This might come as a surprise, but it follows a recent trend adopted by many big European clubs to promote someone who has previously represented them. Manchester United, Arsenal, and Real Madrid are some of the clubs to have previously adopted this policy.

Twitter couldn’t hold back as the news broke about:

Pirlo being announced as the new Juventus manager:

Andrea Pirlo will be the new Juventus manager, confirmed. Total agreement has been reached with Pirlo after sacking Maurizio Sarri – it will be official soon. Here we go! ⚪️⚫️ #Juventus #Pirlo @SkySport

I’ve interviewed Pirlo and I found him quiet, a bit dull and monotone. Certainly not someone who inspires you with words

Then again you could say same about Zidane

It took Andrea Pirlo just 9 days to work his magic at Juventus!

Pirlo with the quickest promotion in football. Without taking charge of a single Under-23 game, he is set to become Juventus’ new first team coach

Must have been a stunning 9 days’ work with the youngsters.

And then there were conspiracies…

Two theories on Pirlo hiring:
1. Pre-agreement with Pep or Zizou for 2021 and Pirlo is interim coach. Didn’t want to give Inzaghi/Poch three year contracts
2. They really believe Pirlo is the right man for the job and he made a pitch similar to what Conte did in 2011.

You see what we are saying?

This is a truly massive gamble. Pirlo has zero experience of coaching a team, let alone a team the size of Juventus. Seems Agnelli wants to emulate Pep/Zizou, but without a stint in the youth team. Unreal……

Juventus appointing Andrea Pirlo as manager is a nod to Chelsea appointing Frank Lampard.
Both men, club legends in their own right, replacing Maurizio Sarri whose brand of football divided opinion to extreme levels among supporters.

People complain that Sarri doesn’t promote youth. Look at him promoting Lampard and Pirlo as the managers of two big European clubs.

No Pirlo, no party!

Can’t wait for the day when Man City replaces Pep with Richard Dunne.

Pirlo head coach of Juventus while Scholes was a kit man at Oldham btw.

Wouldn’t we love to see that?

After the Oscars, what’s next for silent stars of The Artist?