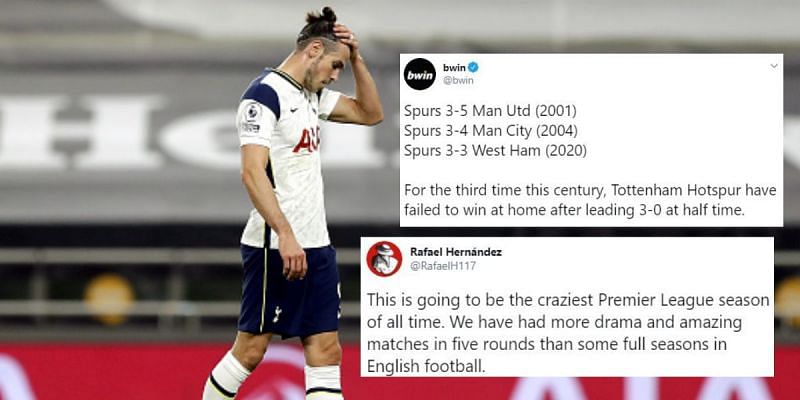 Tottenham Hotspur and West Ham United played out one of the games of the season, as the two sides shared the points after a dramatic 3-3 draw. Jose Mourinho’s side squandered a three-goal lead late in the game, with the Hammers scoring a stunning equalizer to steal a point in North London.

Quickfire goals from Son Heung-Min and Harry Kane put Spurs in the driving seat, with the latter scoring a brace and providing an assist for the first goal. West Ham, however, produced one of the greatest comebacks in Premier League history, as they scored three goals in the last five minutes of the game.

Fabian Balbuena’s strike and an own goal from Davinson Sanchez gave West Ham hope heading into the closing stages of the game, as the away side threatened to pull off the unthinkable. Deep into stoppage time, Manuel Lanzini’s stunner from outside the box capped off an unlikely comeback from the Hammers and sparked wild celebrations from the players.

Here are the best reactions from one of the games of the season so far.

This is going to be the craziest Premier League season of all time. We have had more drama and amazing matches in five rounds than some full seasons in English football.

Manuel Lanzini just wrapped up the Goal of the Season award with that phenomenal strike. Mourinho, Bale and Kane taking a big L. Shouldn’t have taken Sonny off at three zero. Moyesy just graduated from King of Zoom to King of the comeback. This league, this season. Inject it. 💉 pic.twitter.com/pFU0hERfwZ

Thirty minutes ago United shouldn’t have sacked Mourinho and Tottenham were winning the league and now they’ve just drawn 3-3 with West Ham. pic.twitter.com/k8Vkx6dUWK

The Barclays’ scriptwriters have run it back to the mid 00’s this season. Unreal scenes every week

Giants’ CJ Board carted off with neck injury following scary hit vs. Washington

BP returns to profit but warns of volatile outlook