5 Hilarious memes only gamers will understand 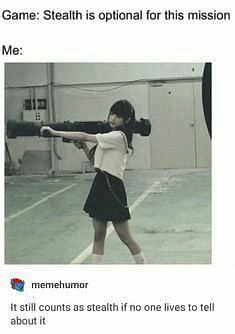 Video games have always been a great source of jokes and funny moments. ‘Having fun’ is at the very root of gaming. It has, over the past few years, led to countless hilarious memes that have cropped up on various social media platforms.

Further, some memes are challenging to crack, and you need to have prior experience to understand them. In this article, we look at some of the hilarious memes that only gamers will understand.

5 Hilarious memes only gamers will understand

First off, we have a meme which analyzes a widespread gamer reaction in missions that require ‘stealth’. These types of missions are common across a range of games, and the expectation is that gamers will make their way like a Ninja, and without making a sound. However, gamers generally play for hardcore action, and often end up killing everybody in sight:

The second meme deals with another situation we have all been a part of. Sometimes, when a part of the map hasn’t been unlocked, or requires the completion of a mission, the road would be blocked with an object.

Sometimes, however, the objects look insufficient, and would practically fail to get the job done in reality. Of course, things aren’t always practical when it comes to video games.

Thirdly, we have a meme which talks about the demise of split-screen gaming. Most multiplayer games are now online, and people hardly go about splitting screens anymore. Of course, it was all for the greater good!

Next on the list, we have another meme that talks about the troubles of online gaming, especially on low-end devices with bad networks. It often happens that it is the sudden familiar lag which tells you that the enemy is near, rather than the in-game mechanics.

Finally, we have a meme which teaches gamers to respect each others’ differences, and encourages them to create a more wholesome society. True players respect every platform!

While we did promise five, the following meme ultimately illustrates the extent of trouble and financial suffering that gamers willingly live through. The next meme is relatable and authentic.