A Woman Takes the Podium at Salzburg 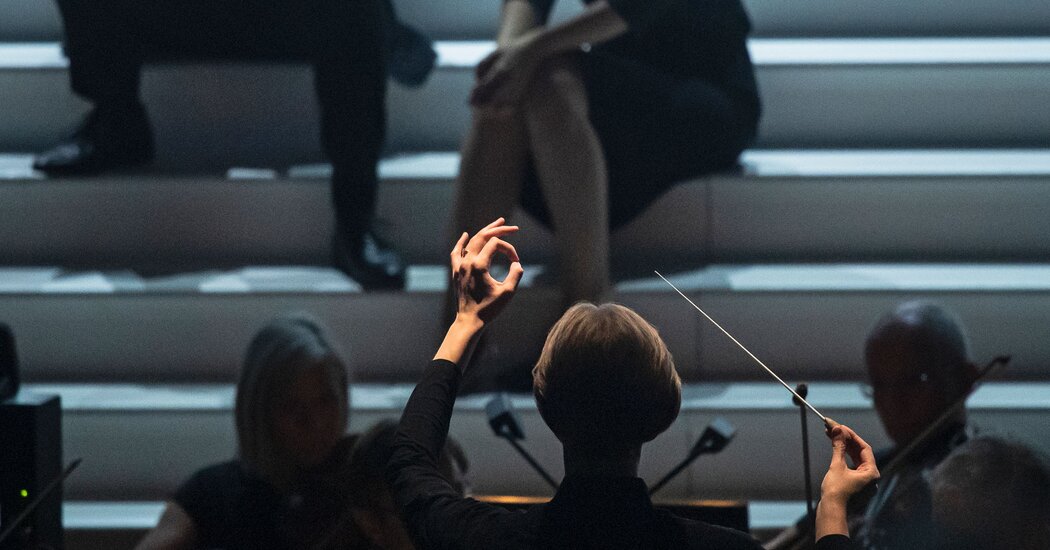 SALZBURG, Austria — Joana Mallwitz, the first woman invited to conduct an opera at the Salzburg Festival in the event’s 100-year-history, doesn’t want to talk about gender.

This summer, the German conductor, who is general music director of the Nuremberg State Theater, is leading performances of “Così Fan Tutte” at a festival that is going ahead, against all odds, amid a global pandemic. Mozart’s 1790 comedy about partner-swapping is one of two operas (along with Richard Strauss’s “Elektra”) headlining a modified festival program that has been engineered to conform to strict safety and hygiene restrictions.

While there are many prominent female musicians, a woman on the podium is still a comparatively rare sight on both sides of the Atlantic. Women hold the top position in only a handful of Germany’s more than 130 orchestras.

“I’m still amazed about all the situations where it’s still possible to be ‘the first woman ever,’” Ms. Mallwitz, 34, told me when we spoke in mid-July. We met between rehearsals for an interview in the Salzburg Festival complex, sitting at opposite ends of a table to ensure that we were at least six feet apart. We kept our masks on, and I tried hard to read her reactions in her piercing blue eyes.

“Conducting a Mozart opera with the Vienna Philharmonic at the Salzburg Festival is, of course, a tremendous honor for me, but I’ve conducted Mozart operas my whole life at major houses, and I wasn’t asked to conduct at Salzburg just because I’m a woman. That’s not how it works,” she said with a trace of irritation.

Ms. Mallwitz was originally announced to lead a new production of “Die Zauberflöte,” which has been postponed until next summer. Instead, the festival’s director, Markus Hinterhäuser, called to ask if she were interested in conducting a special abridged version of “Così,” which is much more of a chamber piece than “Die Zauberflöte.”

Mr. Hinterhäuser has been credited with filling the festival’s sails with fresh wind since he took over as Salzburg’s artistic director in October 2016. He has made artists like the stormy Greek-Russian conductor Teodor Currentzis and the Polish director Krzysztof Warlikowski (who furnishes this summer’s “Elektra”) central to the festival’s profile.

That Ms. Mallwitz, who was voted “Conductor of the Year” in 2019 in a poll conducted by the magazine Opernwelt, was asked not once, but twice, to conduct at this year’s festival points to Mr. Hinterhäuser’s eagerness to enlist her talents. But it also signals a desire on the part of the 100-year-old festival to set a precedent by finally engaging a female conductor. (Only two women — Anne Manson in 1994 and Julia Jones in 2004 — have led opera performances there, both as replacements.)

Ms. Mallwitz was born in Hildesheim and studied at the prestigious University of Music, Drama and Media in Hanover, where she was accepted into a training program for gifted students at the age of 13. (One of her classmates was the pianist Igor Levit, who is performing the complete Beethoven piano sonatas at Salzburg this summer.)

During Ms. Mallwitz’s studies, the Hamburg State Opera appointed its first female music director, the Australian conductor Simone Young. She became an inspirational figure for Ms. Mallwitz, who had recently fallen in love with the symphonic repertoire through studying scores.

“I didn’t know her personally,” Ms. Mallwitz explained. “But for me, as a teenager, this story about this Australian woman who was coming to Hamburg, the most beautiful city in Germany, to lead the opera house, that was naturally a big deal. It was cool. So one shouldn’t underestimate the power of role models.”

After graduation, she spent several seasons working at the opera in Heidelberg, as a vocal coach and as a Kapellmeister (or, roughly, house conductor). In 2014, when she was 27, Ms. Mallwitz became conductor of the opera house in Erfurt, the capital of Thuringia, ranking her among the youngest general music directors in Europe. After four years in Erfurt, she moved to the Nuremberg State Theater, one of Germany’s leading opera houses. During her first season, she conducted a new production of Prokofiev’s “War and Peace” and made her debut at the Bavarian State Opera, in nearby Munich, with a revival of Tchaikovsky’s “Eugene Onegin.”

Ordinarily, the Salzburg Festival would present “Così” uncut — over three hours of music — and with an intermission. But these days call for unusual measures. Working with the production’s director, Ms. Mallwitz put together a version of the score that clocked just over two hours without intermission. She recalled that the composer frequently made changes to his scores to satisfy certain singers or theaters.

“I’m convinced that Mozart himself would have also found a possible way to stage ‘Così’ in 2020,” she said.

At “Così’s” premiere, on Aug. 2, Ms. Mallwitz elicited precise and propulsive playing from the Vienna Philharmonic, in effect the house band. Performances continue through Tuesday.

Ms. Mallwitz’s measured and detailed reading fit with the intimate staging the director, Christof Loy, had devised on a largely white set. The close collaboration between director and conductor, who had worked at a furious pace to put a full production together quickly, resulted in a heightened onstage intensity between the young singers.

“The opera isn’t called “Covid fan tutte,” Mr. Hinterhäuser said in an interview, explaining the festival’s decision not to stage the work in a socially distanced way. (The singers and musicians are regularly tested for the virus.)

At the end of the performance, the audience roared its approval. It was immediately clear that Salzburg had a hit on its hands. The festival’s audience has a reputation for being conservative; no one, however, seemed remotely skeptical about seeing a woman facing the Vienna Philharmonic.

“Orchestral intimacy is her strength,” Jan Brachmann, the classical music critic for the Frankfurter Allgemeine Zeitung, one of Germany’s leading newspapers, wrote of Ms. Mallwitz’s work. “There is no nagging, whipping or goading. Here one hears the confidence in a music that has no need for external effects,” his review continued.

“A lot has changed in the space of a single generation,” Ms. Mallwitz said, adding that today’s young female conductors owed a lot to pioneers like Ms. Young. “She really broke ice. I’m convinced that 20 or 30 years ago she had to fight battles that we don’t need to anymore.”

She explained: “It’s possible that being a woman in this profession used to mean you needed to act more macho or more masculine just in order to survive in that world. That’s just not who I am.” Despite being warned, during her studies, that she needed a thick skin and swagger to make it as a conductor, she decided to go for it anyway.

“The way it’s worked out for me in Nuremberg and now Salzburg just shows you what is possible nowadays.”

Investment by PE/VCs halves to USD 4.1 bn in July: Report