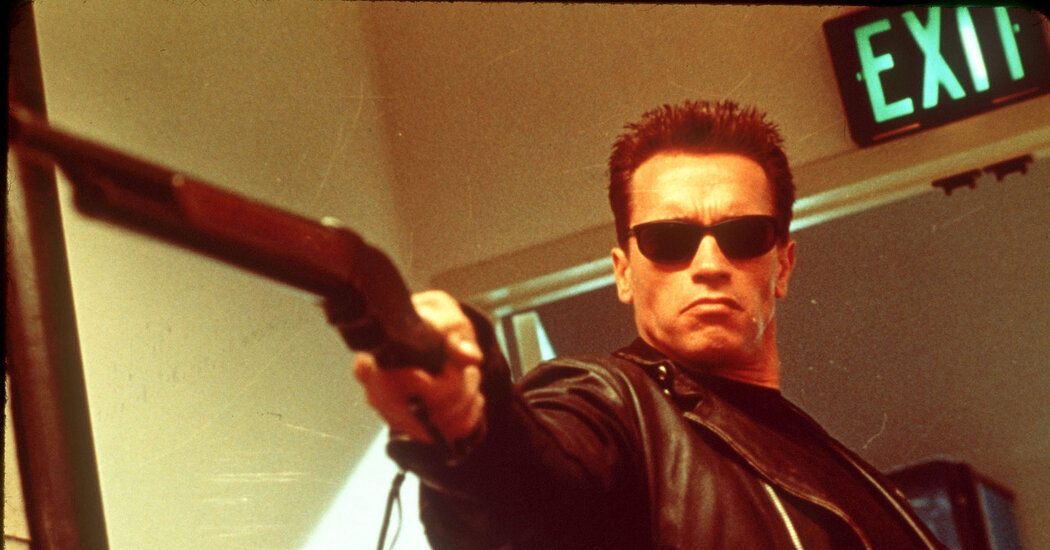 Like everyone, I lose track of time these days. Some people react to that kind of limbo with comfort viewing that creates a familiar routine, like detective series or cooking shows. But I turn to a George H.W. Bush-era blockbuster about time travel and killer robots so I can feel a bit better about the world.

The movie is “Terminator 2: Judgment Day,” and I know what you’re thinking. What is so comforting about Arnold Schwarzenegger exchanging endless rounds of gunfire with a relentless liquid-metal android? Why don’t I just catch up on prestige television, say, or bask in the complete works of the Criterion Channel? (Which, full disclosure, I also do.)

First let’s make sure we’re on the same page, since I’m hearing reports that this franchise may have several sequels. “Terminator 2” (1991) is the one where Arnold’s Terminator is sent from the future to protect the eventual savior of humanity, a 10-year-old named John Connor (Edward Furlong). Skynet, the A.I. computer that will nuke civilization, dispatches a shape-shifting assassin called the T-1000 (Robert Patrick) to kill John and look really cool.

What follows is essentially a feature-length chase scene, like a bad dream. After taking the form of a police officer, the T-1000 pursues John and his mother, Sarah (Linda Hamilton), who’s sprung from a mental asylum. Explosions, fusillades and eye-popping special effects ensue. I never said this was a quiet, meditative gem. But I watch all of it compulsively, as if I didn’t already know the plot’s future.

In all honesty, I’m a bit surprised to be mooning over “Terminator 2” in public. As the top-grossing movie release of 1991 and part of the pop culture vocabulary, it’s no discovery. Many admirers of James Cameron’s 1984 original, “The Terminator,” look askance at his sequel’s catchphrases and sheer size. Not to mention that much of my career as a critic and as editor at Film Comment has involved spotlighting much lesser-known movies — often small-budget or foreign, very few starring Schwarzenegger.

But if I may gratuitously quote Jean Renoir from “The Rules of the Game”: “Everyone has his reasons.” Here are mine.

It’s reassuring to watch a movie where the stakes are apocalyptic at all times. After a day’s hassles and ongoing catastrophes, I like to settle into my couch and watch a seemingly invincible quicksilver angel of death hold the fate of humanity in the balance.

The appeal is simple. I look at imminent nuclear Armageddon and the subsequent hopeless war with unfeeling, self-replicating machines who possess murderous capabilities that might as well be necromantic magic. And I think to myself, “Eh, I guess things could be worse.”

You know where you stand in “T2” — namely, on the brink of global annihilation and entirely dependent on the survival of a moody, erratic preteen whose hobbies include arcade games and credit card fraud. Some might object that the real world also faces ample mortal threats, pandemic and otherwise. Why subject oneself to this robotic unpleasantness to relax? Chamomile tea, for example, is reliably soothing, and, prepared correctly, does not involve mass casualties.

I think the difference with the world’s horrors is that every single time I watch “T2,” it comes to an end. The nightmares remain in the realm of fiction. (So far.)

“Terminator 2: Judgment Day” is a breathtaking peak during a pivotal moment in blockbuster filmmaking: a dazzling combination of highly expressive digital effects and thrilling analog effects — stunt work, chases, and action set pieces whose influence can be seen to this day.

These visual wonders still dazzle. I love the peculiar unnerving heft of the T-1000’s liquid metal: you feel as if you could reach out and touch it, a physicality that’s rare in digital effects. The mind-bending metamorphoses serve as the shimmering physical embodiment of the story’s cold-sweat paranoia: the enemy inspires awe and fear and could be anyone, anything, anywhere.

For its technical accomplishments, the movie went on to win four Academy Awards, out of six total nominations. It’s a rare sequel with all pistons firing, when so many franchise installments today feel belabored and airless (including later “Terminator” visits).

Enough about liquid metal. I love the energy and detail brought by the actors who populate “T2.” Patrick gives us one of cinema’s very finest androids, a model of patient menace. Hamilton is a ferocious action hero, in a movie starring Schwarzenegger. (Some quibble over her character’s voice-over, but if I went through all that Sarah Connor does, I’d want to talk, too.) Furlong makes for a credibly awkward kid. And as the tech guru Miles Dyson, Joe Morton conveys the wholesome curiosity that unwittingly hastens doomsday.

Finally, there are the note-perfect walk-ons — hapless people who cross paths with the unthinkable while getting coffee or answering the door. In my mind, they all get their own friendly Terminators who come back and save them (and give a cornball thumbs-up while lowering into molten steel). I don’t think too much about the possibility of time-travel paradoxes. I’m just getting through the day.

Stream on Fubo; rent or buy on Amazon, Google Play, iTunes and Vudu.