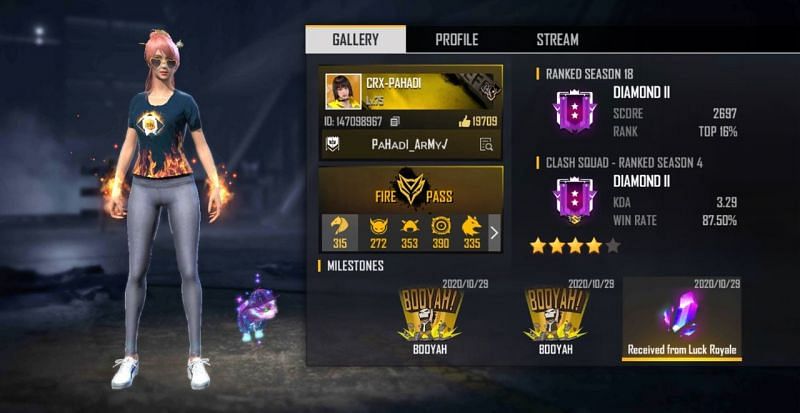 The popularity and the vast number of players that Free Fire enjoys have set the tone for this game’s overall development, including content creation and the esports scene.

CRX Pahadi is a professional Free Fire player for Critical X and a YouTuber. He was also the MVP at the recent Free Fire India Championship (FFIC) Grand Finals.

In this article, we look at his in-game details.

In the Ranked Season 18, CRX Pahadi has taken part in 71 squad matches and remained unbeaten on 15 occasions, which comes down to a win rate of 21.12%. With 251 kills in these matches, he has managed a magnificent K/D ratio of 4.48.

The streamer has also played five duo matches, winning two. He has registered 29 kills at a jaw-dropping K/D ratio of 9.67.

In solo games, the esport athlete has participated in 14 solo games and has a lone victory. He has amassed 81 kills for a splendid K/D ratio of 6.23.

Pahadi started creating content on YouTube over one year ago. Since then, he has uploaded 402 videos on his channel. Currently, he has over 545k subscribers and has over 28.5 million views combined.

History and Significance of the Celtic Festival to Remember the Dead

Leading the way in affordable housing

The Match 3 purse: How much money will Charles Barkley,…

Tom Jones wife: How did Sir Tom and Linda meet? ‘Most…