DHSUD sets stage for future of housing and urban development

Along with stakeholders in Marawi City, Secretary Del Rosario leads the groundbreaking for the 50-bed Marawi General Hospital to be constructed right inside the ground zero.

The Department of Human Settlements and Urban Development (DHSUD) started its full operations in January this year, immediately focusing on laying a solid foundation that would set the tone and direction of the housing sector for years to come.

We have started crafting the National Housing and Urban Development Strategic Plan, which is a 20-year roadmap for housing and urban development in our country. It consolidates the short-, medium- and long-term strategies, plans and programs of the DHSUD, our key shelter agencies (KSAs) and our stakeholders. This will be ready and set for review and approval by the National Human Settlements Board (NHSB) by the first quarter of 2021. 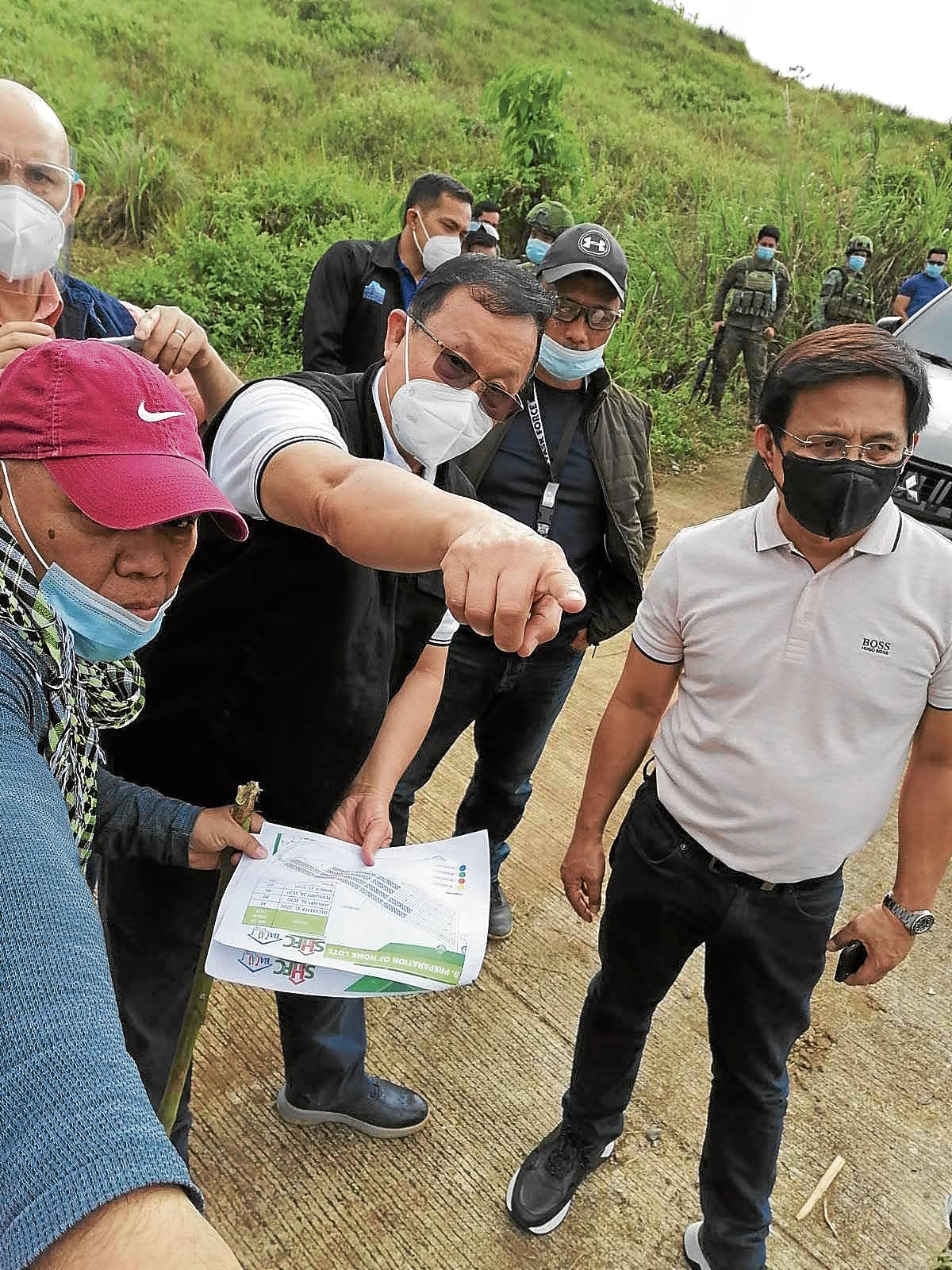 Secretary Del Rosario issues instructions for the ongoing development of an area in Barangay Patani.

The NHSB’s inaugural meeting in October, of course, is an important milestone for the department. In fact, the housing “super body” took off with the approval of three board resolutions that shall serve as its backbone. It would also ensure that all proposals have undergone thorough study, supported by all stakeholders in the housing sector.

In the same month, the DHSUD also spearheaded the celebration of the National Shelter Month, which was highlighted by the launch of an intensified campaign against real estate scammers. The department is currently preparing a joint memorandum circular with the Departments of Justice and of Interior and Local Government to provide more teeth to our efforts to protect homebuyers.

The department likewise signed a joint memorandum circular led by the Anti-Red Tape Authority (ARTA) for the streamlining of the permitting process for common towers that would further bolster the country’s ICT facilities. Our partnership with ARTA would allow the department to champion the Ease of Doing Business in the country. We have so far finalized the guidelines on securing permits for the building of ICT infrastructure.

While we are still in the process of personnel procurement to fill up our manpower requirement to at least 70 to 80 percent in 2021, we have expanded operations to all 16 regions throughout the country. Hence, we are now providing services to every corner of our country. 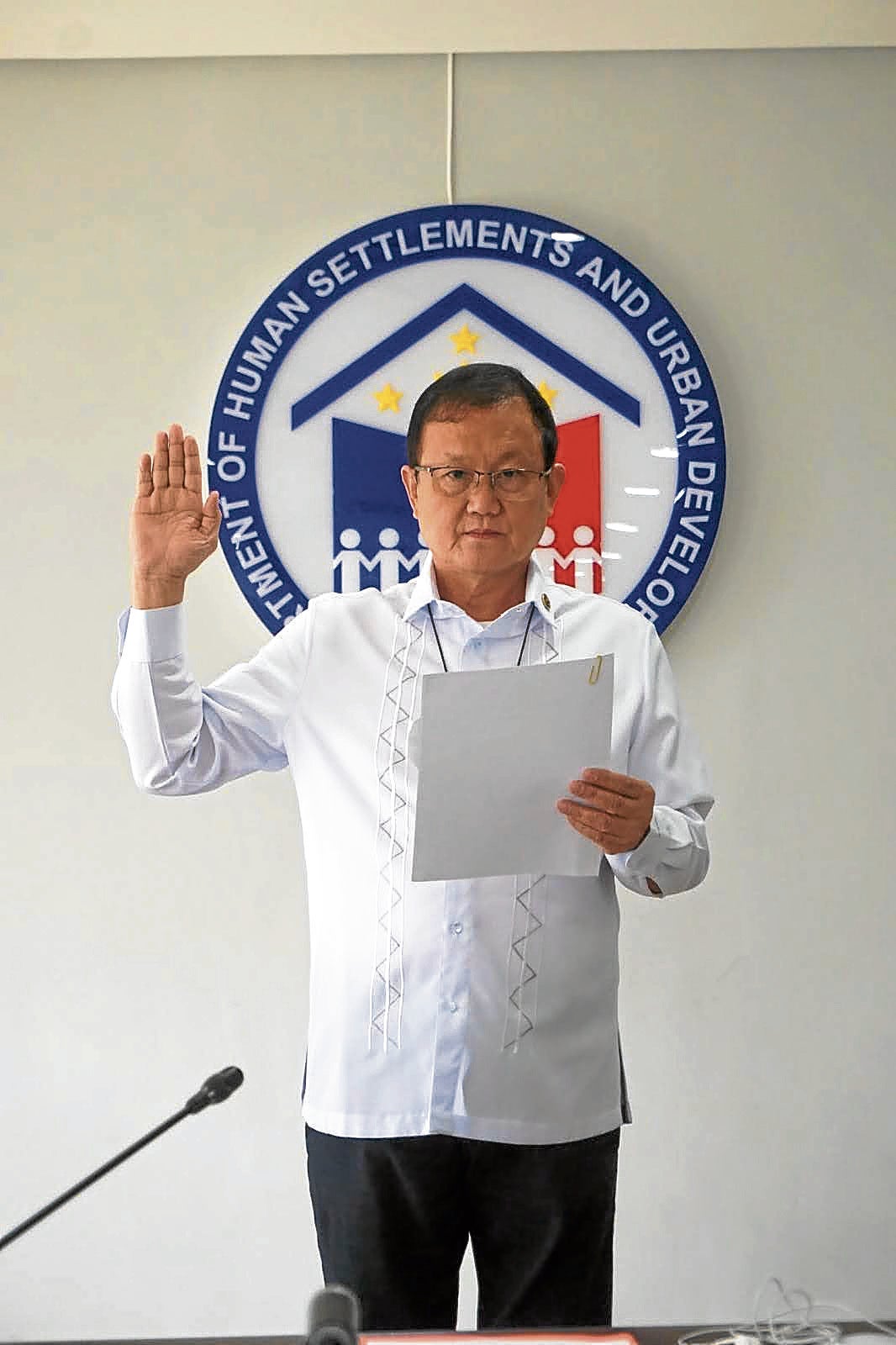 Housing czar takes oath as chairman of the National Human Settlements Board.

Pursuant to its mandate, the DHSUD’s Environmental, Land Use and Urban Planning and Development Bureau and its regional offices have started conducting inventory of idle government lands. They are now working closely with local government units to update and mainstream their respective Comprehensive Land Use and Local Shelter Plans, whose importance have been highlighted by the recent flooding caused by the series of typhoons in Luzon.

The Housing and Real Estate Development and Regulation Bureau (HREDRB), for its part, has been reviewing and amending policies in close collaboration with our partner-developers and concerned stakeholders to ensure synchronized public and private efforts in the housing industry. The DHSUD’s doors are always open to all stakeholders’ inputs for better policies and programs.

Meanwhile, the Homeowners Association and Community Development Bureau (HOACDB) facilitated the conciliation of 3,204 HOA complaints with an average success rate of 68 percent during the first half of the year. It also received 1,282 applications for HOA registration, and conducted 2,640 orientations on the Magna Carta for the Homeowners Associations (R.A. No. 9904). It is now in the process of confederating around 24,000 HOAs.

All the other DHSUD support services have also delivered what was expected of them. In July, the Public Assistance Service launched The Shelter, our official publication which chronicled the department’s plans, policies, programs, activities and accomplishments. It will serve as a bridge in delivering the good news to our stakeholders.

The Planning Service is now in-charge of finalizing the 20-year housing roadmap, along with the DHSUD’s institutional and sector plans. The Administrative Services is at the helm of manpower recruitment in close collaboration with our Placement Board while the Finance, Internal Affairs and Legal Services are preoccupied on how to strengthen our internal processes. 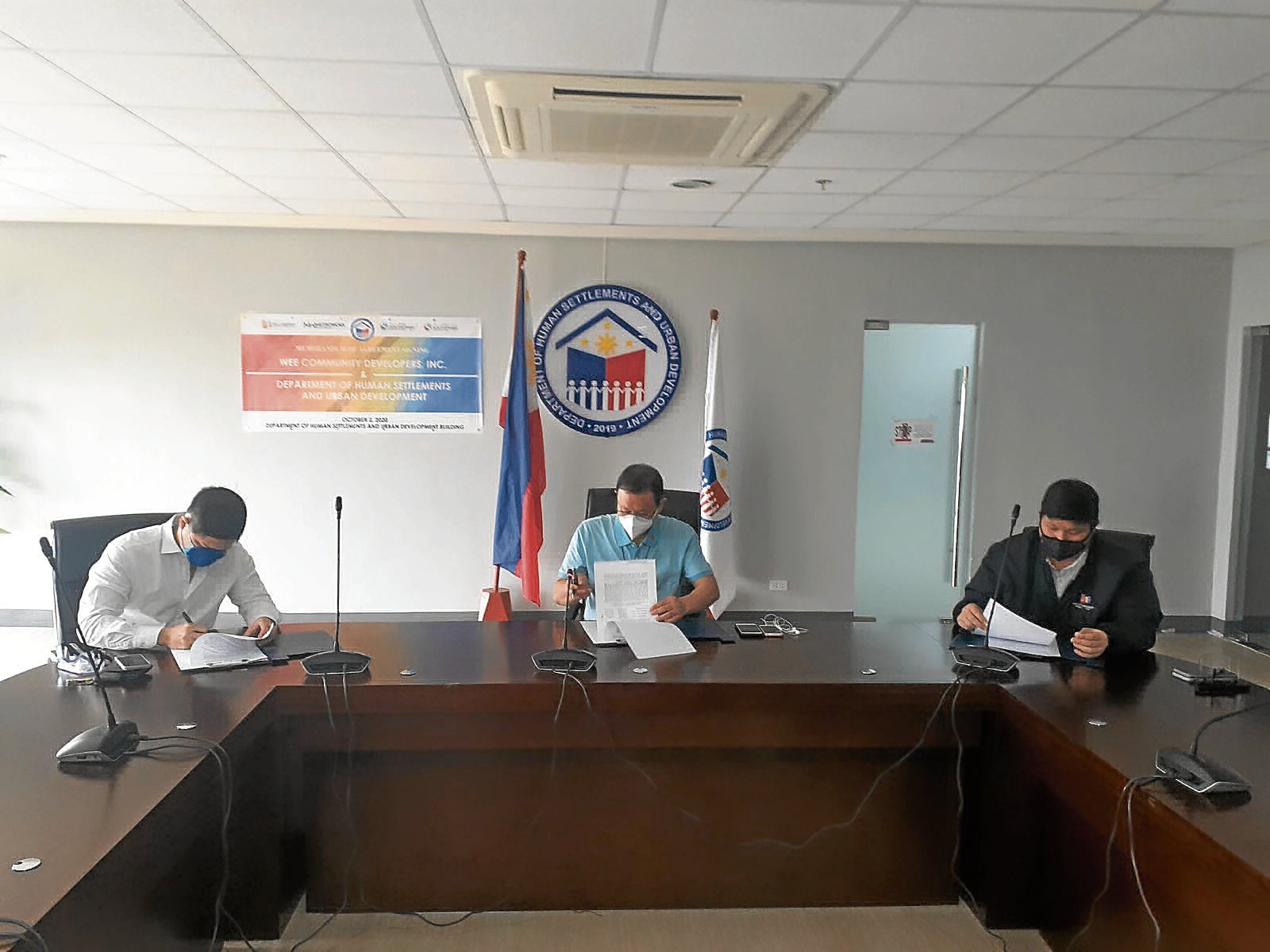 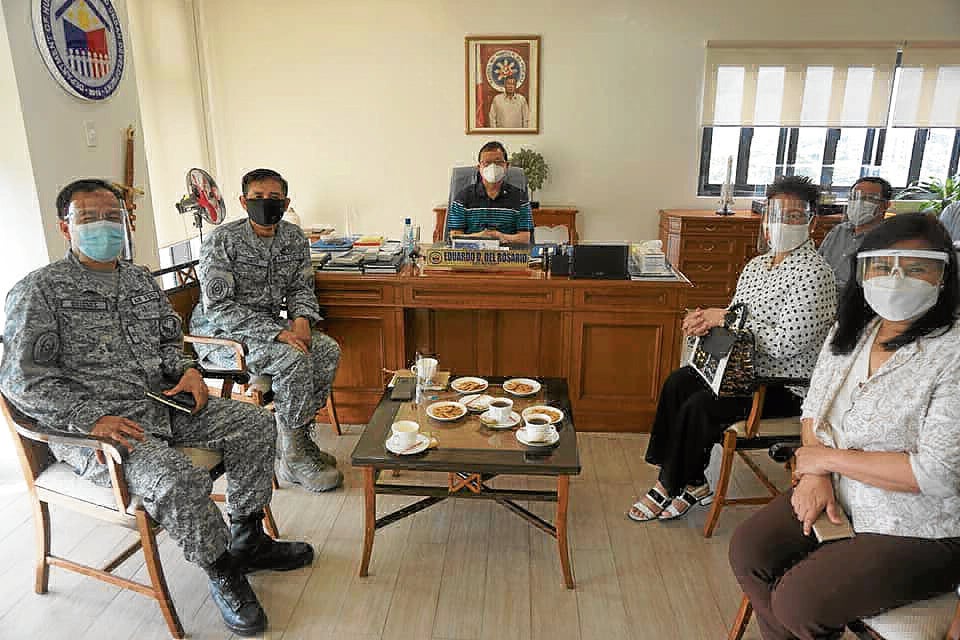 Secretary Del Rosario hosts officers of the Armed Forces of the Philippines and Pag-IBIG Fund for a meeting about their partnership at his office.

In terms of housing units financed and constructed from January to June this year, the National Housing Authority (NHA) built a total of 9,820 housing units. The Home Development Mutual Fund (HDMF) or Pag-IBIG Fund financed 20,631 units, while the Social Housing Finance Corp. (SHFC) with 5,761 financed units.

Because of the limitations brought about by the ongoing COVID-19 pandemic, the entire housing sector had to cut 27.85 percent of its housing production targets for 2020.

However, our KSAs immediately shifted to pro-active measures to mitigate the adverse effects of the health crisis to the housing sector. The shelter agencies implemented three-month moratoriums in the payment of monthly amortization for housing and other loans, benefiting at least 5.5 million members in compliance to Bayanihan 1 and another 60-day moratorium per Bayanihan 2.

We also issued a directive to provide a grace period for home buyers from developers under their in-house financing during the enhanced community quarantine (ECQ). 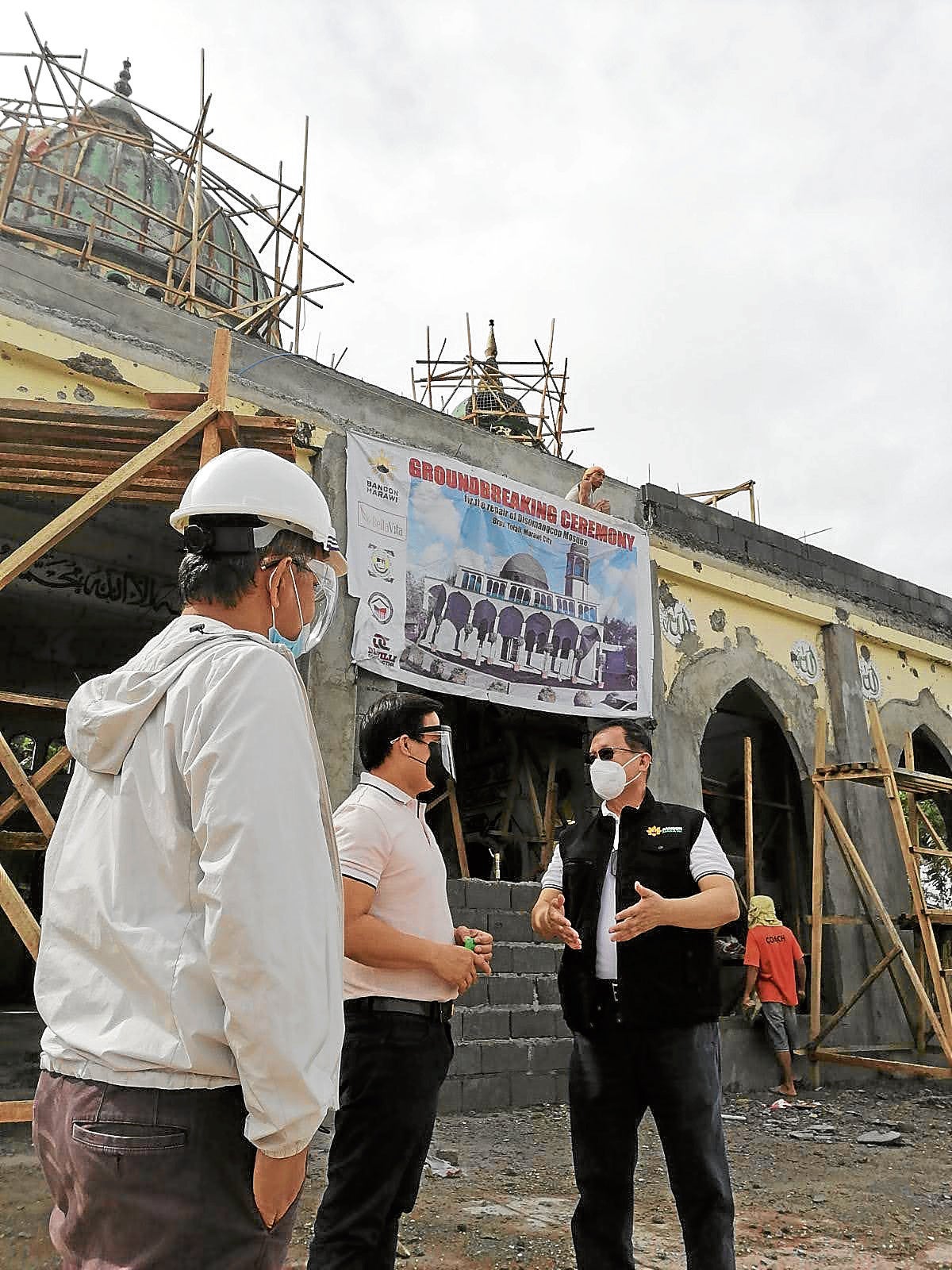 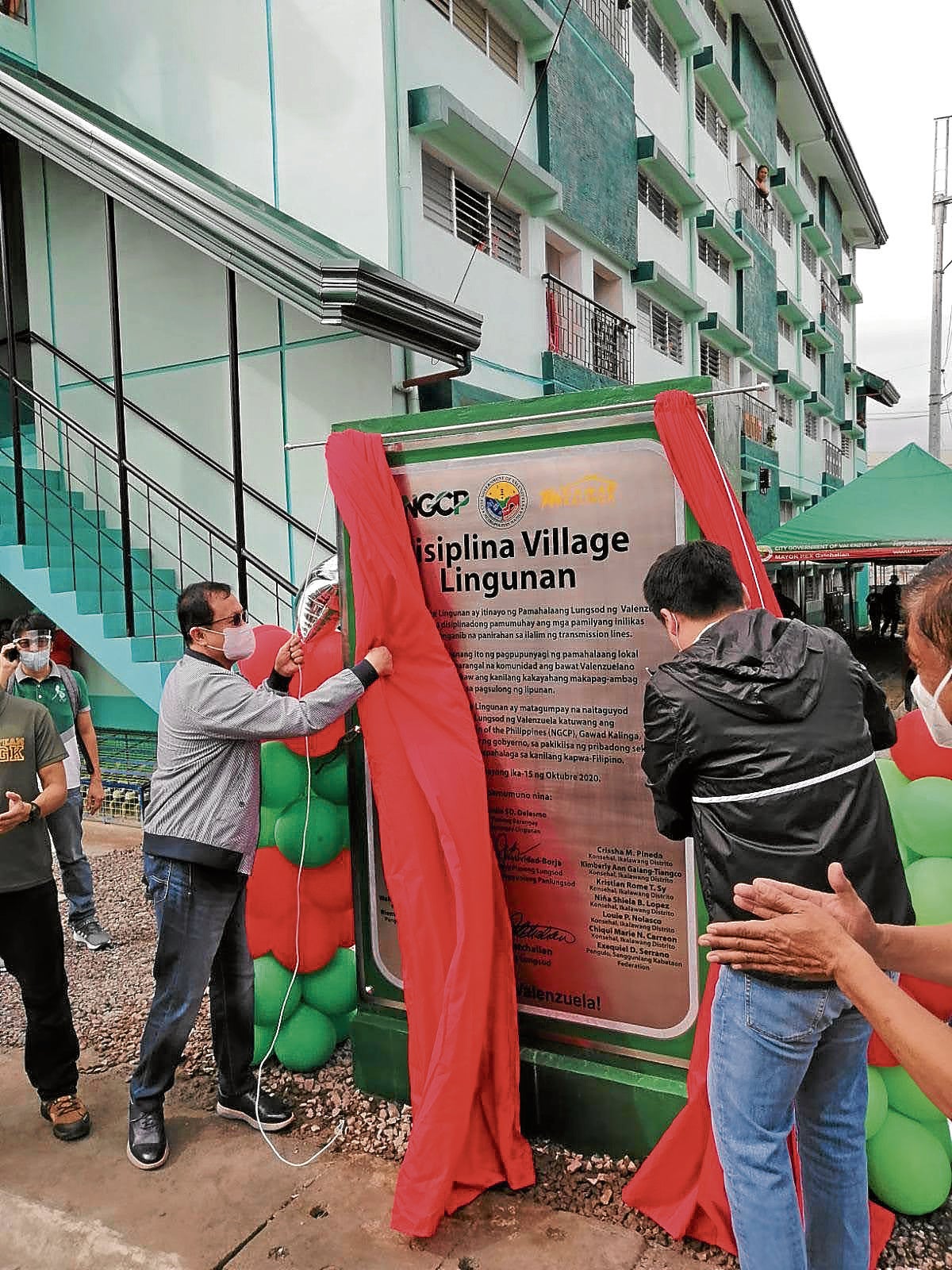 Pag-IBIG Fund also expanded its Housing Finance Construction Loan facility to P10 billion to assist partner-developers, especially the small ones, to cope with the adverse effects of COVID-19 pandemic.

Among the other financial interventions were loan restructuring and lowered interest rates in support to Bayanihan 1 and 2.

In behalf of private developer groups, the DHSUD lobbied for the resumption of construction works in real estate which was granted by the Inter-Agency Task Force for the Management of Emerging Infectious Diseases in June 2020. Hence, more than 55,000 workers immediately returned to work for the much needed employment and caused the resumption of construction of more than 400,000 housing units.

HOAs were also enjoined to assist the government in the implementation of ECQ and general community quarantine protocols.

The department has also been quick to respond and extend initial financial assistance to victims of multiple calamities and successive strong typhoons that hit the country in the latter portion of the year in close collaboration with the Department of Social Welfare and Development. 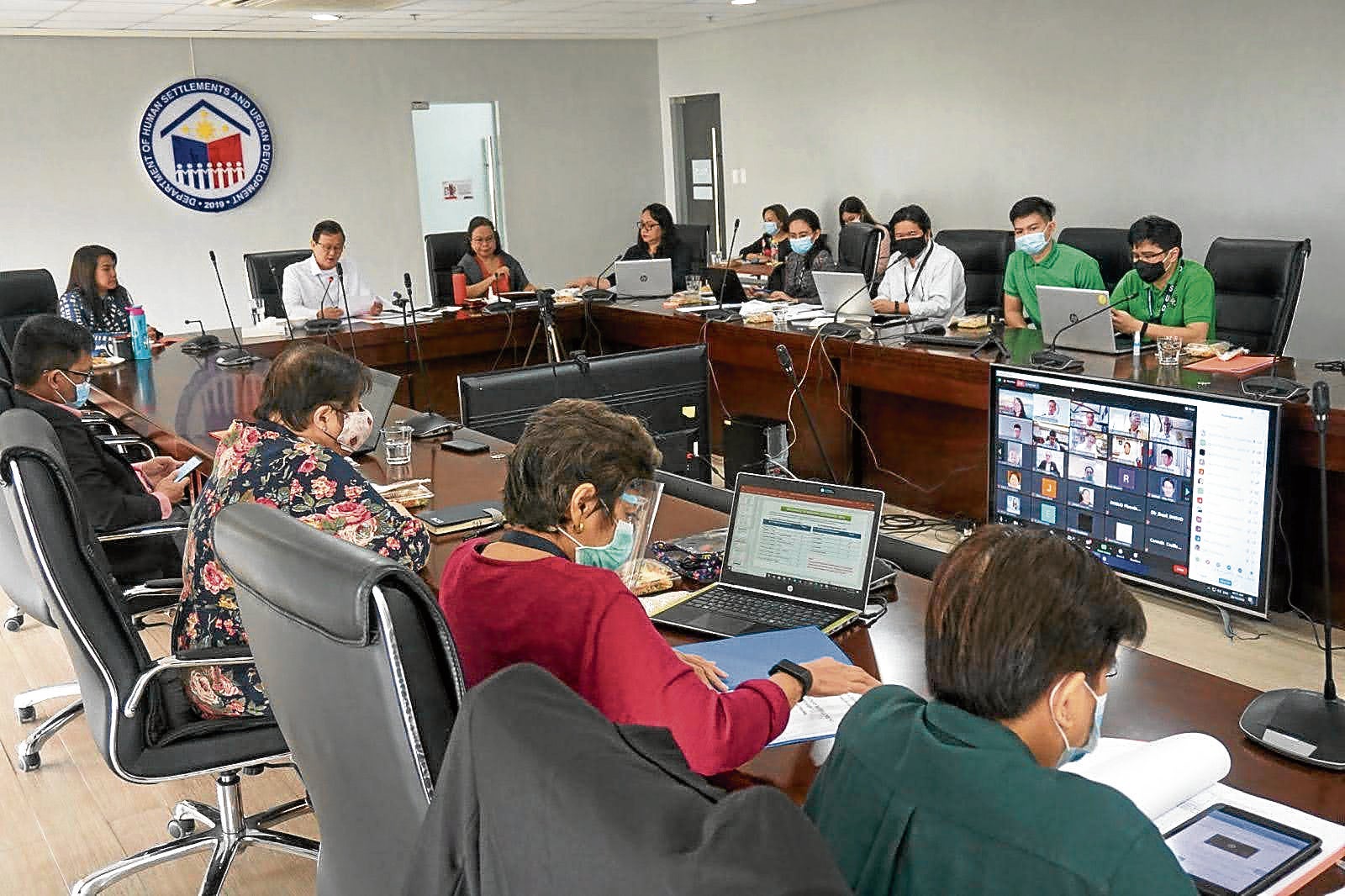 DHSUD Secretary Eduardo D. Del Rosario presides over Management Committee Meeting that went on even amidst the COVID-19 pandemic.

After President Duterte approved the release of a P3.56-billion budget with Special Allotment Release Order (SARO) to the different implementing agencies in April and May this year, the construction works for facilities destroyed during the five-month siege inside the Marawi City’s Most Affected Area (MAA) went full blast, and in fact, have already started in July.

Towards the end of this year, simultaneous groundbreaking and laying of foundations for critical infrastructure in Marawi City such as road networks, bridges, barangay centers, school buildings, the Grand Padian Central Market and Mosques finally took off.

Also, service providers have temporarily provided limited supply of electricity and water in sectors now occupied by IDPs who have already reconstructed their houses in MAA, a telling sign that “ground zero” is slowly returning to normalcy. Families have already started rebuilding their destroyed homes. These efforts are complemented by permanent shelters in various stages of completion.

Together with the 56 implementing agencies that form Task Force Bangon Marawi, I reiterate our commitment to complete the rehabilitation of Marawi by December 2021 or definitely within the term of the administration in fulfillment of President Duterte’s guidance that Marawi must rise as a prosperous city again.

With such a busy year and a rather unconventional start, the DHSUD forges forward to face existing and future challenges of the housing sector head on.

Boney Kapoor expresses anger over Maidaan and RRR clash at…

Beverley Bryan: the British Black Panther who inspired a…

Who is David Culley? Texans bringing in veteran NFL…