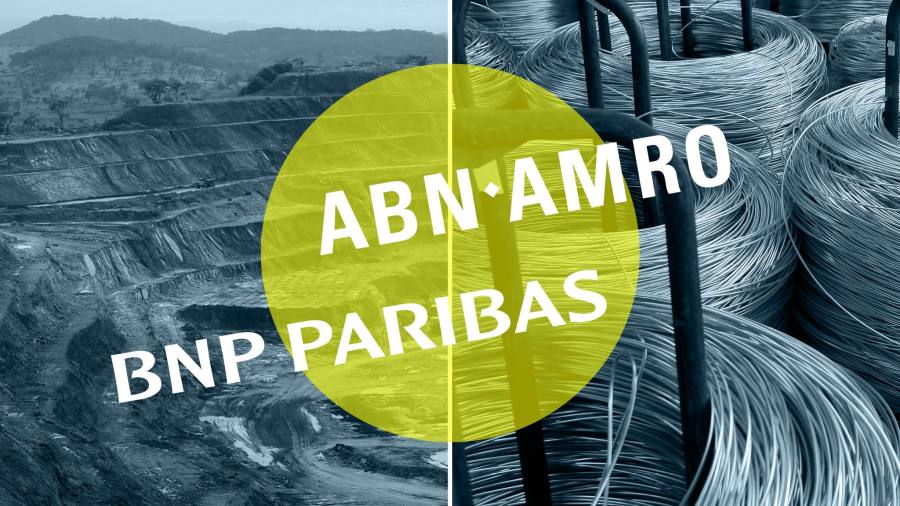 Some of Europe’s biggest banks are turning their backs on the business of financing the global market in raw materials, amid a series of scandals, large losses and increasing regulation.

This week ABN Amro announced it was exiting commodity trade financing, a business whose roots with the Dutch bank stretch back to 1824 when King William I of the Netherlands founded its predecessor to finance the East Indies colonies.

It followed last week’s news of a decision by BNP Paribas to pull back from financing the sector amid questions over the future of its Geneva-based branch, which had played a key role in establishing the modern oil trading industry.

Banks lend to traders of energy, agricultural and metal commodities through facilities encompassing borrowing bases, revolving credit lines and simple letters of credit. With a single supertanker capable of hauling a cargo of crude oil valued at more than $80m — or far more when oil prices are higher — the sums involved can be substantial. The retreat of ABN and BNP risks making the financing of raw materials more difficult at a time when the global economy is already reeling from coronavirus.

Commodity traders, which operate on razor-thin margins, said they expected that less competition would naturally cause costs to rise. The largest of them believe they may be beneficiaries if smaller competitors are squeezed out.

“If more banks withdraw from the sector then everyone could face higher financing costs, especially the smaller players,” said an executive at a major commodity trading house. “It’s likely to be part of a cycle and we wouldn’t be surprised to see more exit, before stronger banks fill this space. But in the short-term less competition will be a factor.”

The most immediate issue has been a series of alleged frauds revealed as commodity prices slumped in March and April in the face of government measures to try and halt the spread of the pandemic.

The most high profile was Singapore-based Hin Leong Trading, one of Asia’s biggest fuel traders. A police investigation is under way after its owner admitted to $800m of undisclosed losses.

ABN has previously been criticised by analysts for taking excessive risks to make up for a lack of scale across its corporate banking division, which includes trade and commodity finance. This led to several large one-off losses, including more than €200m linked to Hin Leong.

Meanwhile BNP decided to pause lending to commodity trade houses after being hit by losses at Coex Coffee in the US, as well as GP Global Group and Phoenix Commodities in the Middle East.

Clifford Abrahams, chief financial officer at ABN, said the bank did not take on riskier customers than peers, but added that its relatively small size meant any exposure to high-profile frauds had a bigger impact.

“If you’ve got a big, diverse portfolio you can afford to absorb the occasional big loss — we are a smaller bank in that area so those losses may be more visible,” he said.

However, while larger banks may be more insulated from the risks of fraud, the entire sector is exposed to rising regulatory costs.

Under Basel IV reforms, which come into force over the next few years, banks have less leeway to determine the risk weightings attached to their corporate loan books, requiring them to have more capital to protect against losses.

ABN’s corporate and investment banking division, for example, would need to have a third more capital than under previous arrangements.

“It makes the risk/return calculations that much tougher,” Mr Abrahams said. “That’s another reason behind our decision to focus on Europe where we have clear links with our other businesses, so there’s a better chance of earning a good return.”

Commodity traders are now asking whether the exit of two high-profile European banks will spark a wider trend.

“Banks are thinking very hard these days about their strategy,” he said. “It may not lead to complete withdrawal but some scaling back will definitely happen, so if I was a midsized trader I would be worried.”

The response to ABN’s announcement, which was part of a broader review of its corporate and investment bank, highlighted why peers may be tempted to follow suit. Shares in the bank jumped 7 per cent despite reporting a second successive quarterly loss.

ABN told analysts that pulling out of trade finance would be easier than restructuring projects at other investment banks. Its balance sheet is made up of relatively simple loans, and its mainly Asia-based customers had little crossover with the rest of its businesses.

“If it will be as easy to close it down without impacting the rest of the bank as management says, why has it taken so long?” said Kian Abouhossein, an analyst at JPMorgan. “The question is not why now, but why wasn’t it done five years ago?”

He suggested the gaps left behind by banks such as ABN and BNP are likely to be filled by more local lenders in Asia or Japanese banks. “I don’t see the other Europeans jumping in,” he said.

Baldev Bhinder, managing director at Blackstone & Gold, a specialist commodities law firm in Singapore, said there was a “big issue” with transparency and visibility at smaller commodity houses. Banks would increasingly want more information on clients than just a strong-looking set of accounts.

“They used to lend to SMEs with good balance sheets,” Mr Bhinder said. “But I think we’ve come to a stage in the process where we must accept that balance sheets might not be the full picture.”

The biggest commodity traders are not going to run out of lenders any time soon. Trafigura, a top three independent oil trader, has loan arrangements in place with 135 banks.

But ABN was seen as one of the most prominent. It was among the bookrunners on an $8bn revolving credit facility for Vitol, the world’s largest independent oil trader, in 2019, and its US arm was joint lead on a $1.8bn facility for Swiss-based Mercuria the same year.

Mr Lambert said: “It sends a signal when a bank of this stature exits the space.”

Varner among three tied for lead at Wyndham Championship