In a new study, two bones found on Islandmagee situated on the east coast of County Antrim of Northern Ireland have been confirmed to be of two prehistoric dinosaurs. This is a rare discovery as these are the only dinosaur bones to be found on the island. Also, the fossils are dated back to the Hettangian age of the earliest Jurassic period which dates back to somewhere between 201.3 to 199.3 million years ago.

The study has been published in the journal Proceedings of the Geologists’ Association. Initially, it was speculated that the fossils belonged to just one dinosaur, but further analysis revealed that they were of two different dinosaurs. The first one is a part of a femur (upper leg bone) identified to be of a four-legged herbivore dinosaur Scelidosaurus. The second of the two bones is part of the tibia (lower bone) belonging to a Sarcosaurus-like two-legged carnivore dinosaur.

The conclusion was drawn after a high-resolution 3D digital model of the fossils produced by Dr Patrick Collins of Queen’s University Belfast which was later analysed by the researcher Robert Smyth and Professor David Martill of the University of Portsmouth.

Robert Smyth said: “Analysing the shape and internal structure of the bones, we realised that they belonged to two very different animals. One is very dense and robust, typical of an armoured plant-eater. The other is slender, with thin bone walls and characteristics found only in fast-moving two-legged predatory dinosaurs called theropods.” 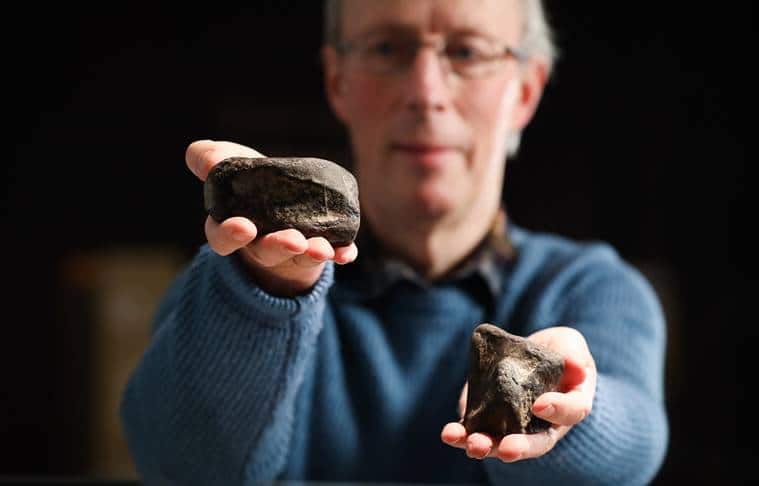 Dr Mike Simms, of National Museums NI, with the theropod tibia on the left and the Scelidosaurus femur on the right

“Despite being fragmentary, these fossils provide valuable insight on a very important period in dinosaur evolution, about 200 million years ago. It’s at this time that dinosaurs really start to dominate the world’s terrestrial ecosystems.”

On the other hand, Professor Martill made a distinctive observation comparing it with marine iguanas of today as he said, “Scelidosaurus keeps on turning up in marine strata, and I am beginning to think that it may have been a coastal animal, perhaps even eating seaweed like marine iguanas do today.”

The bones were discovered by the late Roger Byrne, a schoolteacher and fossil collector. Byrne donated them to Ulster Museum along with other fossils he found. They will be put on display once the restrictions are lifted.

Dr Mike Simms of National Museums NI lauded the discovery as he said, “This is a hugely significant discovery. The great rarity of such fossils here is because most of Ireland’s rocks are the wrong age for dinosaurs, either too old or too young, making it nearly impossible to confirm dinosaurs existed on these shores. The two dinosaur fossils that Roger Byrne found were perhaps swept out to sea, alive or dead, sinking to the Jurassic seabed where they were buried and fossilised.”

Express Tech is now on Telegram. Click here to join our channel (@expresstechie) and stay updated with the latest tech news.

For all the latest Technology News, download Indian Express App.

Yo Yo Honey Singh’s new song ‘First Kiss’ will leave you tapping your feet. Watch video

How the IPL cash-cow delivered even amid coronavirus pandemic

Princess Eugenie is ‘modest’ and emphasises her…

Sunil Gavaskar Felicitated By BCCI On 50th Anniversary Of…