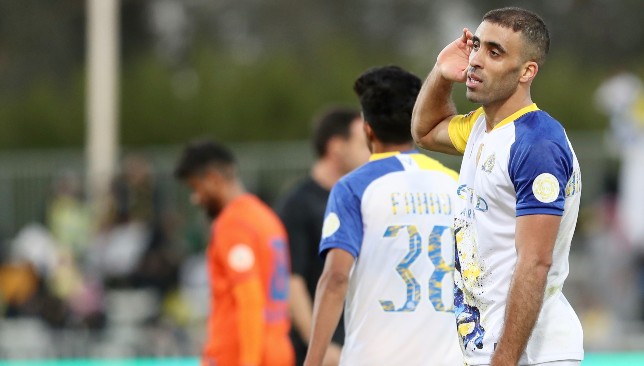 The Saudi Professional League is back.

August 4’s end to the five-month hiatus caused by coronavirus has ensured a return to the storylines that dominated before this, unexpected, break.

Each of the 16 top-flight sides will need to rely on a key man throughout the remaining weeks of this unique 2019/20 campaign. With the help of Wyscout and SofaScore, here is our selection:

A return to the SPL after 10 years away has gone superbly for Abha.

Tunisia playmaker Saad Bguir is a big reason why they are comfortably in mid-table and their fellow new arrivals from MBS League, Al Adalah and Damac, sit in the bottom two.

Bguir – who is carrying knock for this week’s resumption – has double the goal tally (eight) of his nearest team-mate and contributed two more assists (seven) than anyone else. For context about how supremely he’s performing, the ex-Esperance star’s combined tally of goals and assists (14) is one ahead of Al Ahli Jeddah superstar Omar Al Somah’s.

A strong end will drive Abha up the standings and cement interest in the coveted 26-year-old. Al Ittihad – who are next up on Tuesday – and Al Wehda reportedly lead the chase. 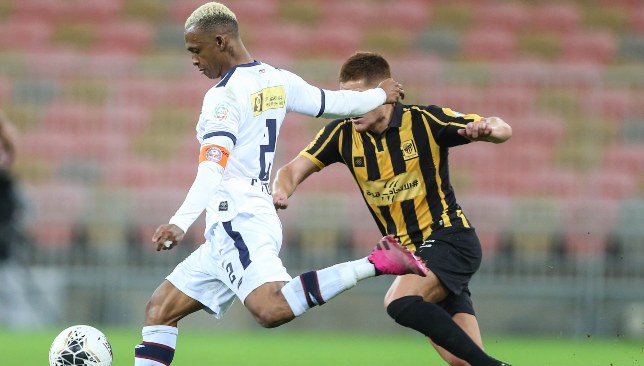 Al Adalah have it all to do if their first taste of top-flight football isn’t to be a short one.

For a six-point gap to safety and worst SPL goal difference of -20 to be corrected, the form of Madagascar striker Carolus Andriamatsinoro is defining.

The 30-year-old is top scorer on eight strikes, yet has notched once in his last 13 top-flight outings. He is also, notably, trailing an xG (expected goals) of 12.6 – the competition’s fourth-highest.

He must get back on the goal trail, ASAP. 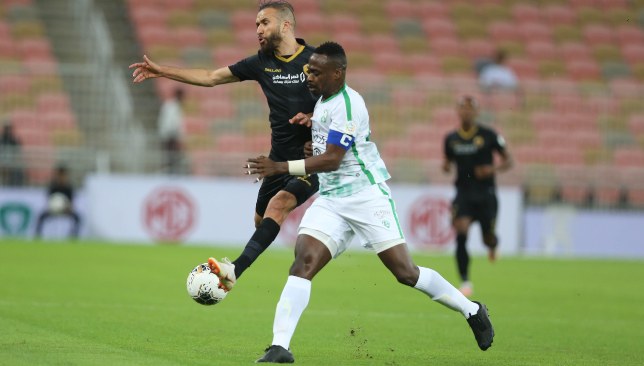 The goals of Syria superstar Al Somah will always be vital for Ahli, yet it is a forgotten figure who could be key in the challenges ahead.

Saudi Arabia centre-back Motaz Hawsawi has only been fit enough to feature three times in the SPL since 2018/19 kicked off.

A recent return to training, however, provides hope of experience being injected into Vladan Milojevic’s backline. His, potential, presence will also provide added competition to Mohammed Al Fatil and the emerging Abdulbasit Hindi, plus another option if friendly experimentation with a three-man defence continues. 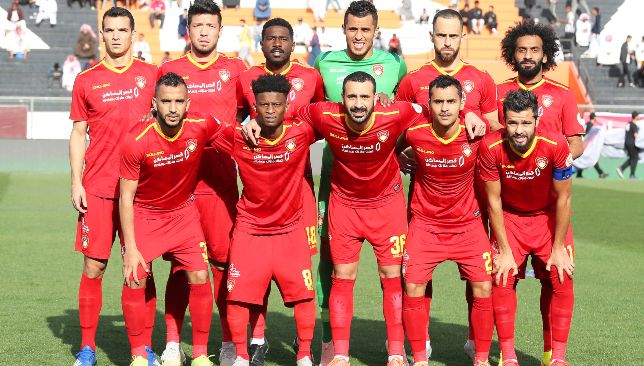 Problems at both ends of the pitch have defined second-bottom Damac’s troubled SPL comeback for the first time since 1982.

A beacon of quality, however, has been provided by Algerian goalkeeper Moustapha Zeghba. The January arrival from Wehda has offered a step-up in quality to compatriot Chamseddine Rahmani.

This will need to continue for a five-point gap to 13th to be bridged. Especially as only Al Hazem’s Malik Asselah (84) has made more saves than him this term (79). 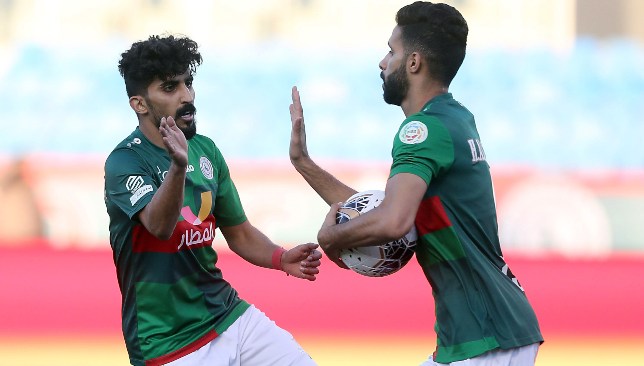 There isn’t a great deal for Ettifaq to play for.

The Commandos are 10 points from danger in 10th and 10 points off third-placed Wehda in the race for AFC Champions League football. They will also have to do without fast-paced Al Ahly and Morocco striker Walid Azaro, who is now blacklisted by the Saudi Arabian Football Federation after refusing to extend his loan.

This contentious departure could see further responsibility handed towards resident Saudi Arabia star Mohammed Al Kwikbi. The winger, at his best, is a flamboyant dribbler, also blessed with a searing turn of pace.

This season, however, has been beset by niggling injuries and the distraction of a contract saga which was only ended in January. His four assists from 15 run-outs is the best at Ettifaq, though a pair of goals is well down on 2018/19’s benchmark six.

It is now up to him and ex-Leeds United attacker Souleymane Doukara to fill the void left by Azaro. 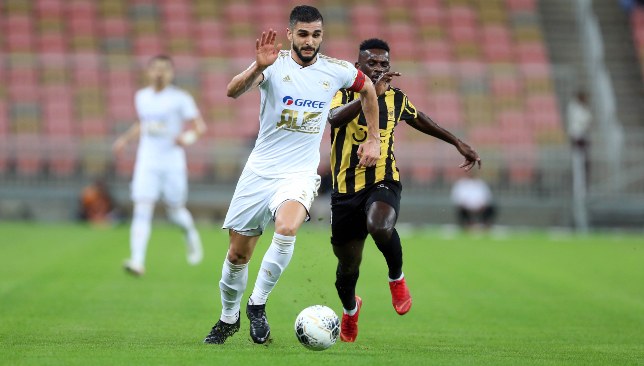 Pericles Chamusca’s ironclad side will never be cast as the division’s great entertainers.

Playmaker Youssef El Jebli leads the way with six goals, which is a third of Al Nassr’s Abderrazak Hamdallah’s tally. A fourth-best defence – breached only 26 times – has provided the bedrock for a campaign that may yet deliver Asian football.

Skipper Igor Rossi embodies everything that is good about the club. The Brazilian centre-back – formerly of Hearts – has made the most interceptions (175) and blocked the second-most shots (19). 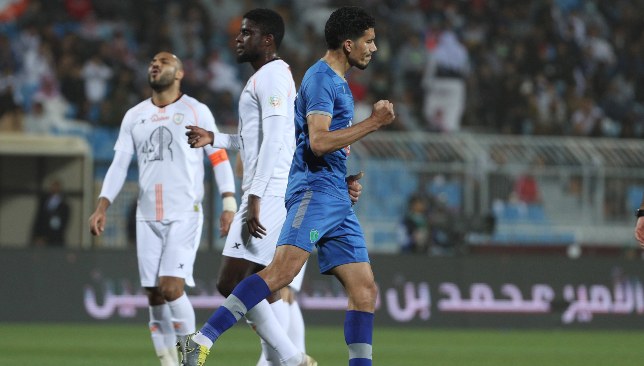 This has been a miserable campaign for third-bottom Fateh.

The shock 2012/13 champions have been in the drop zone since match-week 3. They also witnessed a five-match undefeated streak punctured at rivals Adalah before the enforced stoppage.

Enduring optimism about reeling in Ittihad (four points ahead) and Hazem (five points ahead) will be sustained if Morocco centre-back Marwane Saadane can maintain his standards. The 28-year-old’s six goals in 21 matches make him the highest-scoring defender in the division. 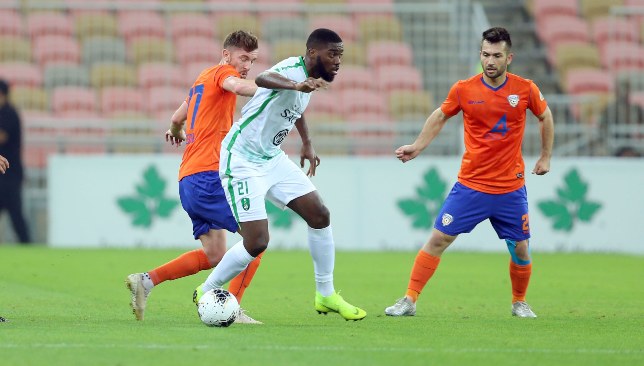 Worries about relegation have long been banished by Jorge Simao’s outfit.

Part of this confidence is founded upon the, startling, impact exerted by January pick-up Carlos Villanueva. The ex-Chile playmaker has recorded four goals and three assists since a bitter end was provided to his three-and-a-half-year tenure at Al Ittihad.

Only Arsenio (seven) has more assists for Fayha, while waylaid compatriot Ronnie Fernandez (seven) and Ghana winger Samuel Owusu (five) are the only team-mates to outscore him. They’ve all been in situ at King Salman Sport City Stadium throughout the campaign.

August 24’s return to Itti should be an interesting watch. Shame there will be no supporters to greet a returning hero. 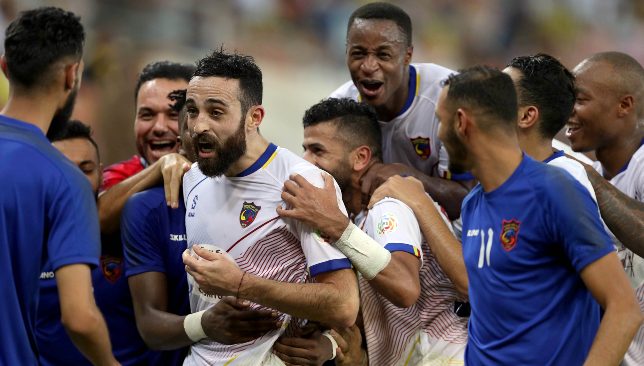 A nervous end to 2019/20 is guaranteed for Hazem, who sit two places and five points from devastation.

Their joint-second-worst defence (41 conceded) has been bailed out by an attack orchestrated by Driss Fettouhi. The former Morocco Under-23 midfielder has excelled in a playmaking role, largely off the left flank.

An impressive tally of eight assists is just bettered by Al Faisaly’s Youssef El Jebli (nine) in the SPL. At Hazem, his three goals make him second-top scorer behind Brazilian centre-back Alemao (four).

Fettouhi is essential to hopes of survival. 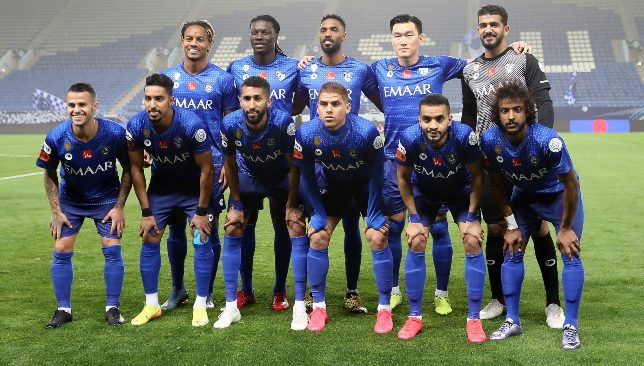 Where do you start with Hilal’s galaxy of stars?

An unheralded cog, however, has grown in prominence this term. Goalkeeper Abdullah Al Mayouf has been freed from the presence of Oman icon Ali Habsi and responded with a series of stellar performances.

An increasing importance is highlighted by the fact none of his team-mates come close to his 1,800 minutes of SPL action this season, across 20 games. This is, already, a marked improvement on 2018/19’s 830 minutes from nine fixtures.

From experiencing only nine SPL run-outs last season, he’s the only Hilal player to perform in all 1,800 minutes this time.

A six-point lead will need to be protected and the Saudi Arabia shot stopper has proved to be an exceptional last line of defence. 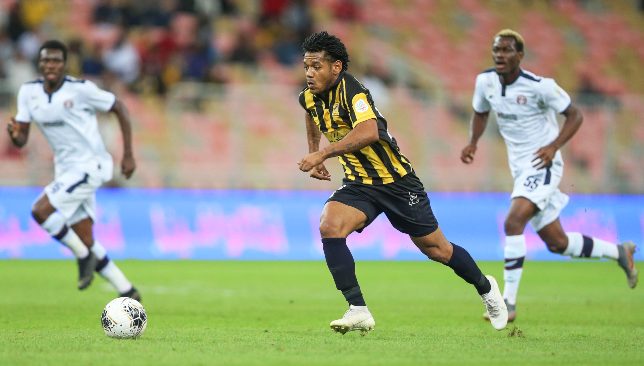 Alarm bells continue to ring in the yellow and black half of Jeddah.

Since the cessation of play, alone, their relegation-haunted supporters have witnessed Saudi superstar Fahad Al Muwallad go AWOL upon his return from a doping ban and then come back into the fold, centre forward Aleksandar Prijovic be sentenced to three months home detention for refusing to obey a curfew imposed in Serbia and hear revelations from president Anmar Al Haili to MBC in May that debts had risen to 200 million riyals.

Amid this maelstrom, Romarinho’s continuation after his own contract wrangle is a significant development. The Brazilian forward’s 11 goals is eight more than any team-mate and no-one at Ittihad can better an assists tally of three.

His strikes have been directly worth five points. The Tigers would be in the drop zone without them. 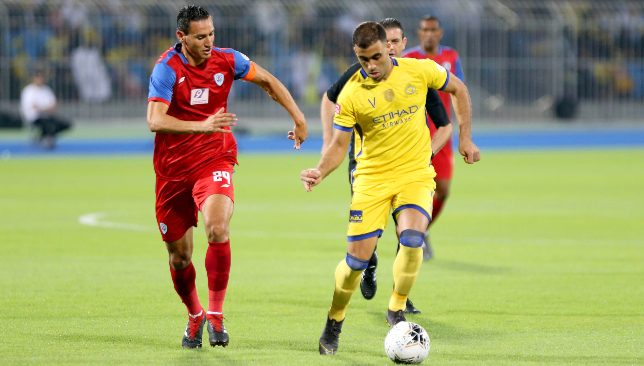 There is an awful lot of work to do for the champions, who sit six points behind Riyadh rivals Hilal.

This is where the peerless Abderrazak Hamdallah comes in – and there is room for improvement even for 2019’s global top scorer.

His last eight SPL appearances of 2018/19 contained a, frankly ludicrous, 19 strikes. A repeat down the final stretch is required to haul in Hilal, once again. 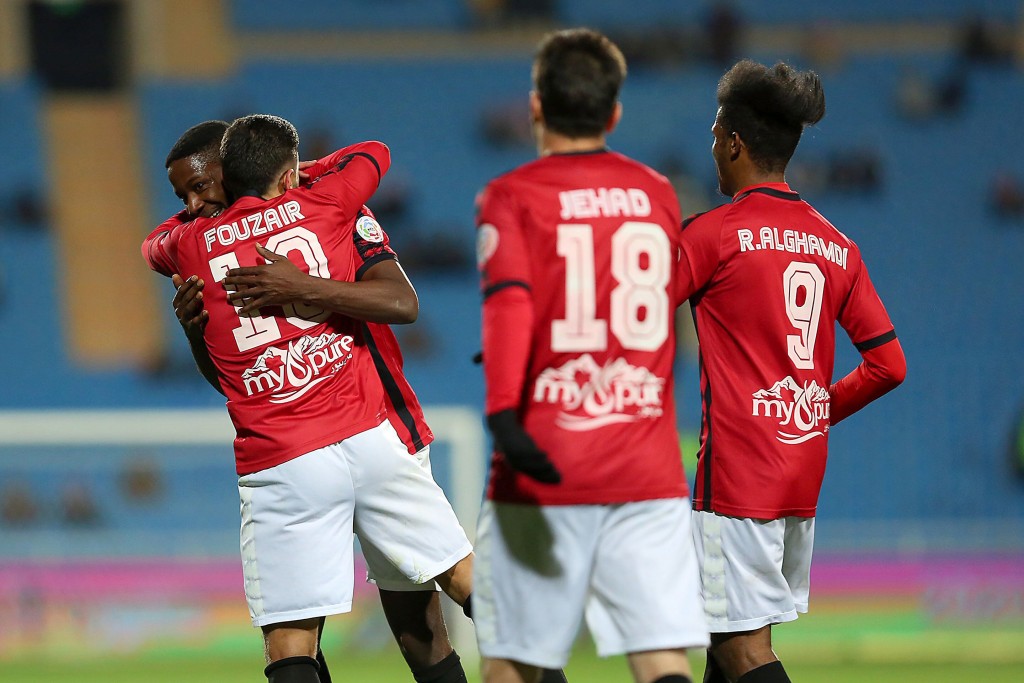 They sit a solid seventh, despite boasting the division’s fourth-leakiest rearguard (41 conceded) and a leading marksman in the tireless Mohammed Fouzair who has netted on just six occasions.

Improvements could be made at both ends of the park. Defence, though, is the obvious starting point.

Cameroon international Arnaud Djoum has experienced a refined debut campaign upon arrival from Hearts, even breaking free to produce three goals and three assists. A return of 41 interceptions, however, is well below Karim Aouadhi’s 112 for Abha that leads the way among defensive midfielders. 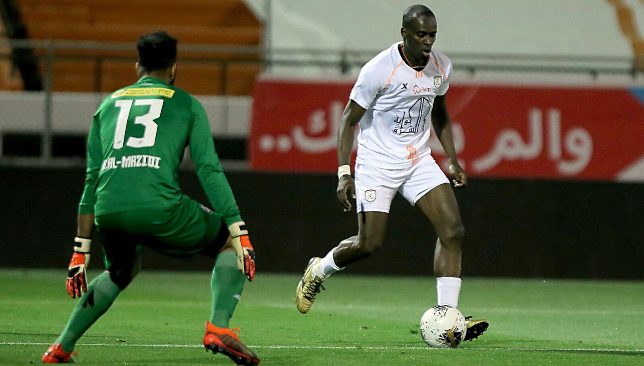 Goals were a problem that proved beyond the talents of Jorge Almiron and Luis Garcia.

Shabab’s return of 28 in 22 matches played is the lowest in the top half and fifth-worst overall. Much was expected of January addition Makhete Diop after a headed winner on debut at Hazem, yet only two more have followed in six games since.

For new head coach Pedro Caixinha to thrive, the form of live-wire Colombian Danilo Asprilla is key. The winger, at his best, can be both unplayable and an exceptional team-mate.

A tally of five goals and six assists speaks volumes. His 156 dribbles put him fourth in the SPL, while no other player can match a cross accuracy of 41.5 per cent.

An increase in volume – 82 crosses is enough for joint ninth – would be, gratefully, welcomed by Diop and breakthrough Saudi striker Abdullah Al Hamdan. 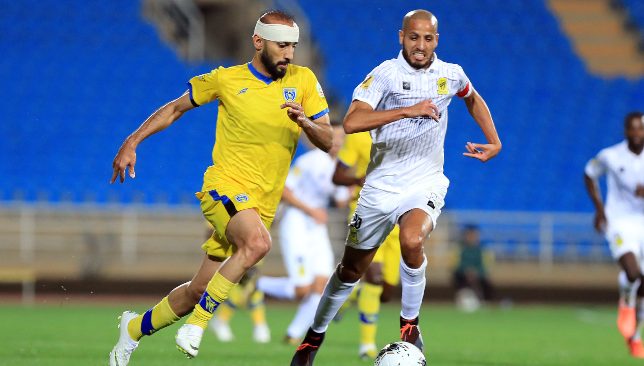 The Cameroon striker’s refusal to attend training amid conflict about the validity of Taawoun’s unilateral option to extend his deal into a third year has dominated proceedings. Yet the 30-year-old has represented a faded force in 2019/20, notching only three times in 13 SPL run-outs compared to 2018/19’s 21 goals in 28 matches.

An alternative option up top is required by head coach Vítor Campelos. This is where the fitness of veteran Mohammad Al Sahlawi is vital, even though he’s notched only once in six top-flight fixtures in yellow.

The 33-year-old former Nassr and Saudi striking great is back in Riyadh undergoing treatment on a back problem. It must clear up in time for August 4’s exacting restart at Faisaly. 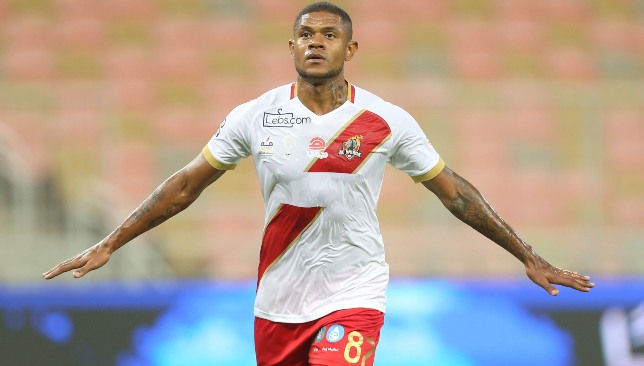 Wehda’s first exposure to the AFC Champions League is within touching distance.

Jose Daniel Carreno’s men, who will still rue February’s frustrating defeats to lowly Fayha and Fateh, sit two points above Ahli, after winning five of their last eight SPL fixtures. Solid performers can be found throughout the XI, yet none are more influential than Anselmo.

November’s call to thrust the, usual, defensive midfielder into an attacking role has been rewarded with seven goals and two assists. These need to keep being registered in the eight-match sprint to the finish.

Amitabh Bachchan mourns the death of his friend Amar Singh