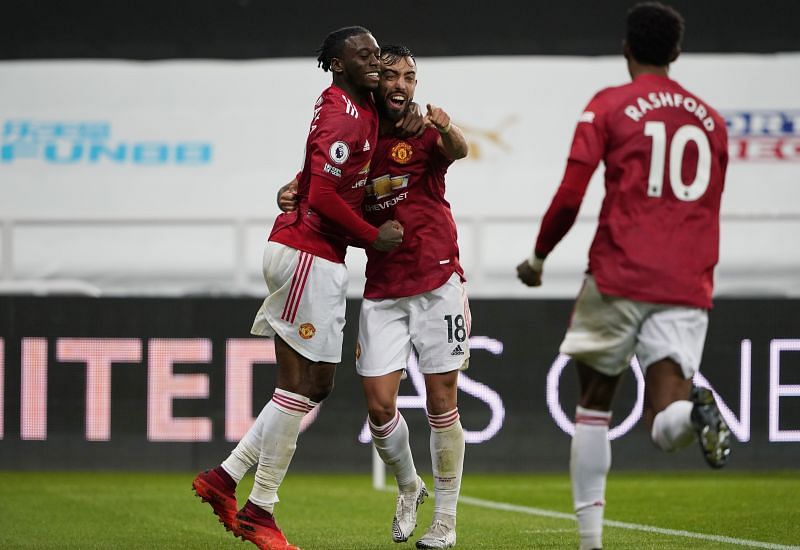 Bruno Fernandes atoned for a rare penalty miss by scoring one and setting up another, as Manchester United scored three late goals en route to registering a 4-1 win over Newcastle United on Saturday.

Fernandes’ goal in the 86th minute gave his side a 2-1 lead after Harry Maguire’s first-half header had canceled out Luke Shaw’s unfortunate own goal in the second minute.

Aaron Wan-Bissaka and Marcus Rashford then added the gloss to Manchester United’s win, one that was much-needed in the wake of their recent 6-1 defeat to Tottenham Hotspur.

Seeking to make amends for the embarrassing result at Old Trafford two weeks ago, Manchester United got off to the worst possible start. Shaw inadvertently diverted Emil Krafth’s cross into his own net with less than two minutes on the clock to give Newcastle an early lead.

The away side responded in positive fashion and thought that they had regained parity soon after, only for Fernandes’ effort to be chalked off as Juan Mata was found to be offside in the buildup.

The equalizer did arrive in the 23rd minute via United captain Harry Maguire. The defender rose highest to nod home a Juan Mata corner as the two sides went in at the break on level terms.

The visitors were given a chance to take the lead in the 58th minute after VAR adjudged that Jamal Lewis had fouled Marcus Rashford in the box. However, Fernandes fluffed his lines from the spot for the first time since joining from Sporting Lisbon in January.

Manchester United peppered the Newcastle goal in search of a winner and were finally rewarded for their efforts in the 86th minute, having missed a few chances and being denied repeatedly by Karl Darlow in the Newcastle goal.

Fernandes made amends for his penalty miss by finishing off a sweeping Manchester United counter-attack, before Aaron Wan-Bissaka grabbed his first United goal four minutes later.

Fernandes then turned provider, setting up Rashford for the fourth deep into injury time, as the visitors sealed a 4-1 win that would go a long way to boosting the morale in the Manchester United camp.

On that note, here’s a look at five major talking points from an engaging affair between Newcastle United and Manchester United.

#1 Manchester United ring in the changes

With the 6-1 humiliation at the hands of Tottenham Hotspur still fresh in the minds of Ole Gunnar Solskjaer and his players, Manchester United took to the field against Newcastle United with a new-look playing eleven, both in terms of personnel and formation.

The absence of Anthony Martial necessitated a change upfront from Solskjaer. The Norwegian also opted to deploy both Fred and Scott McTominay in central midfield roles, with Daniel James, Bruno Fernandes, and Juan Mata playing as a three behind Marcus Rashford.

The most high-profile omission from the starting eleven was Paul Pogba. The Frenchman dropped down to the bench alongside fellow midfielder Donny van de Beek, as Solskjaer seemed to favor a more cautious approach in this fixture.

Despite the unfortunate start, having the extra man in midfield allowed Manchester United to retain more possession and create more chances, something that they had been severely lacking in previous matches.

#2 A fully-fit Allan Saint-Maximin is a real threat

Allan Saint-Maximin’s debut season in the Premier League was cut short by regular injury layoffs that prevented him from hitting his stride on the pitch.

However, during the time he was on the pitch, the Frenchman showed enough of his pace, power, and trickery to delight the football purists and give Premier League defenders cause for concern.

As such, Saint-Maximin showcased exactly why Newcastle United have opted to extend his contract to 2026, delivering a masterclass in skill and creativity that caused the opposition defenders all sorts of problems.

Marauding down Newcastle’s left-wing, the Frenchman was in fine form through the course of the game, skipping past challenges seemingly at will. Scott McTominay, seemingly given the task of keeping Saint-Maximin in check, was given a torrid time as he was twisted this way and that by the exciting winger.

If the Magpies are to improve on their 13th-placed league finish last season, a fully-fit Saint-Maximin is bound to be key to their fortunes.

German president in quarantine after bodyguard tests positive for COVID-19