Cowabunga Dudes! The Teenage Mutant Ninja Turtles are back as Mezco Toyz finally debuts their version of the turtles. Coming out of the One:12 Collective line, Leonardo, Raphael, Donatello, and Michelangelo are back in one righteous boxed set. These turtles do not really follow any specific version of them through TV, comics, and movies but feature combined elements of them. Their bodies are very Eastman and Laird style, which is nice and unique to some of the other figures on the market. All four turtles are a slightly different shade of green and have an interesting textured design on each. On top of that, Mezco Toyz has completely loaded this Teenage Mutant Ninja Turtles set with some sweet accessories.

Shredder and the Foot Clan will not be able to keep up with this TMNT set, as fans will have plenty of ways to customize these turtles. Each ninja comes with 3 different head sculpts, two different bandanas, 12 different hands, and plenty of weapons. Soft goods elements are also included with Raph’s trechcoat, Mikey’s hoodie, as well as multiple cloaks. Other accessories included pizza, shell grapples, shell communicators, all of the TMNT signature weapons, and plenty more ninja goodies. This is the ultimate Teenage Mutant Ninja Turtles set, and Mezco Toyz has this boxed set at $400. An Oct – Dec 2023 release is expected, but I would not be surprised for a Q1-Q2 2024 release at this rate. This set is not a Mezco exclusive and can be found at most online retailers like here for pre-order right now. 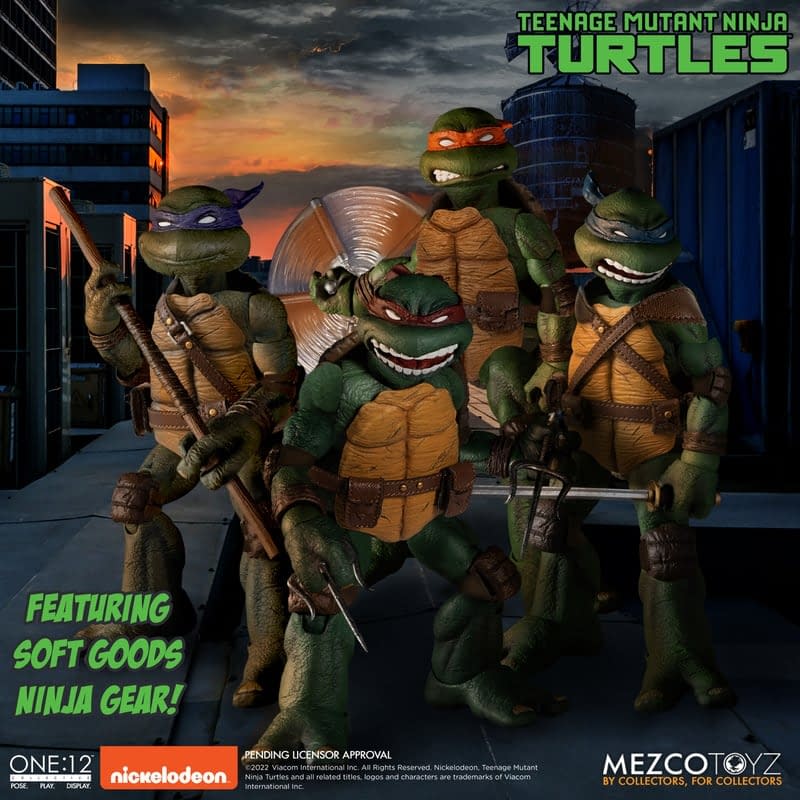 “The TMNT each wear their respective, interchangeable colored masks and include real soft good utility belts and harnesses that can hold their signature weapons. Students of ninjitsu, the Turtles prepare to take down Shredder and the Foot CLAN, equipped with an arsenal of ninja weapons like shuriken, sai, kunai, katanas, tonfas, push dagger, and a bo staff. If that wasn’t enough, they include additional alternative cloth goods and more!”

“After being exposed to radioactive ooze, four baby turtles are transformed into humanoids and trained by Master Splinter, a mutant rat who becomes their adoptive father. Residing in the sewers of New York City, the Teenage Mutant Ninja Turtles fight to protect civilians and keep evil at bay.”

The One:12 Collective Teenage Mutant Ninja Turtles Deluxe Boxed Set is packaged in a collector-friendly box, designed with collectors in mind.